Provided by The Commonwealth Fund

The United States health care system is the most expensive in the world, but this report and prior editions consistently show the U.S. underperforms relative to other countries on most dimensions of performance. Among the 11 nations studied in this report—Australia, Canada, France, Germany, the Netherlands, New Zealand, Norway, Sweden, Switzerland, the United Kingdom, and the United States—the U.S. ranks last, as it did in the 2010, 2007, 2006, and 2004 editions of Mirror, Mirror. Most troubling, the U.S. fails to achieve better health outcomes than the other countries, and as shown in the earlier editions, the U.S. is last or near last on dimensions of access, efficiency, and equity. In this edition of Mirror, Mirror, the United Kingdom ranks first, followed closely by Switzerland (Exhibit ES-1).

Expanding from the seven countries included in 2010, the 2014 edition includes data from 11 countries. It incorporates patients’ and physicians’ survey results on care experiences and ratings on various dimensions of care. It includes information from the most recent three Commonwealth Fund international surveys of patients and primary care physicians about medical practices and views of their countries’ health systems (2011–2013). It also includes information on health care outcomes featured in The Commonwealth Fund’s most recent (2011) national health system scorecard, and from the World Health Organization (WHO) and the Organization for Economic Cooperation and Development (OECD). 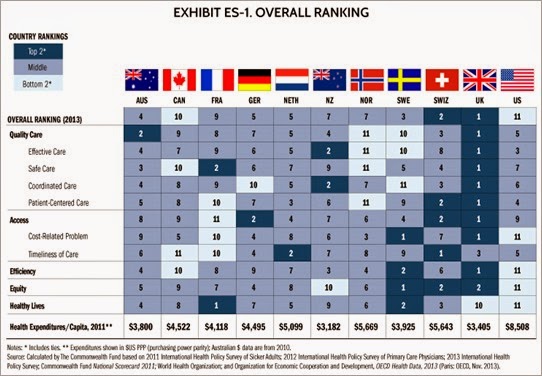 The most notable way the U.S. differs from other industrialized countries is the absence of universal health insurance coverage.5 Other nations ensure the accessibility of care through universal health systems and through better ties between patients and the physician practices that serve as their medical homes. The Affordable Care Act is increasing the number of Americans with coverage and improving access to care, though the data in this report are from years prior to the full implementation of the law. Thus, it is not surprising that the U.S. underperforms on measures of access and equity between populations with above- average and below-average incomes.

The U.S. also ranks behind most countries on many measures of health outcomes, quality, and efficiency. U.S. physicians face particular difficulties receiving timely information, coordinating care, and dealing with administrative hassles. Other countries have led in the adoption of modern health information systems, but U.S. physicians and hospitals are catching up as they respond to significant financial incentives to adopt and make meaningful use of health information technology systems. Additional provisions in the Affordable Care Act will further encourage the efficient organization and delivery of health care, as well as investment in important preventive and population health measures.

For all countries, responses indicate room for improvement. Yet, the other 10 countries spend considerably less on health care per person and as a percent of gross domestic product than does the United States. These findings indicate that, from the perspectives of both physicians and patients, the U.S. health care system could do much better in achieving value for the nation’s substantial investment in health.

The U.S. ranks last of 11 nations overall. Findings in this report confirm many of those in the earlier four editions of Mirror, Mirror, with the U.S. still ranking last on indicators of efficiency, equity, and outcomes. The U.K. continues to demonstrate strong performance and ranked first overall, though lagging notably on health outcomes. Switzerland, which was included for the first time in this edition, ranked second overall. In the subcategories, the U.S. ranks higher on preventive care, and is strong on waiting times for specialist care, but weak on access to needed services and ability to obtain prompt attention from primary care physicians. Any attempt to assess the relative performance of countries has inherent limitations. These rankings summarize evidence on measures of high performance based on national mortality data and the perceptions and experiences of patients and physicians. They do not capture important dimensions of effectiveness or efficiency that might be obtained from medical records or administrative data. Patients’ and physicians’ assessments might be affected by their experiences and expectations, which could differ by country and culture.

Disparities in access to services signal the need to expand insurance to cover the uninsured and to ensure that all Americans have an accessible medical home. Under the Affordable Care Act, low- to moderate-income families are now eligible for financial assistance in obtaining coverage. Meanwhile, the U.S. has significantly accelerated the adoption of health information technology following the enactment of the American Recovery and Reinvestment Act, and is beginning to close the gap with other countries that have led on adoption of health information technology. Significant incentives now encourage U.S. providers to utilize integrated medical records and information systems that are accessible to providers and patients. Those efforts will likely help clinicians deliver more effective and efficient care.

Many U.S. hospitals and health systems are dedicated to improving the process of care to achieve better safety and quality, but the U.S. can also learn from innovations in other countries—including public reporting of quality data, payment systems that reward high-quality care, and a team approach to management of chronic conditions. Based on these patient and physician reports, and with the enactment of health reform, the United States should be able to make significant strides in improving the delivery, coordination, and equity of the health care system in coming years. 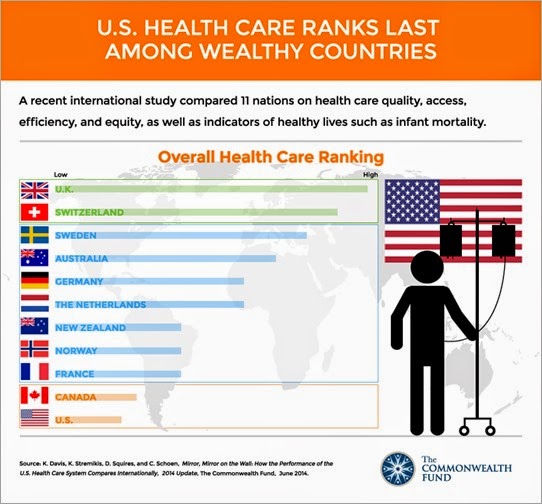 Posted by Hepatitis C Research and News at 2:28 PM