Therapies that specifically retard progression or induce regression of fibrotic liver disease have entered the clinical stage[[1], [2]]. This is remarkable, since clinical validation of antifibrotic efficacy remains difficult and since the mere reduction of excess scarring, without an improvement of hepatic angio-architecture and synthetic function is a disputed primary clinical endpoint [3]. Importantly, as in cancer therapies, drugs that address more than a single pathogenic pathway are usually more efficient than single highly specific pathway modulators [1]. Moreover, the high costs and risks of drug development have opened the field for drug repurposing, i.e., the validation and use of defined agents that were already tested clinically for diseases other than fibrosis. These insights have further sparked an interest in a more holistic pharmacological approach to fibrosis, which includes reevaluation of the herbs of Traditional Chinese Medicine (TCM).

The recorded history of TCM can be traced back over 2000 years, although it is common belief that its origins range as far back as Chinese civilization, i.e., >5000 years. TCM derived its theoretical foundations, including diagnostic and treatment methodologies, from ancient Chinese philosophy. It virtually dragged the Chinese nation through periods of poverty and chaos as an exclusive medical way of health care, before Western medicine was introduced after a series of revolutionary campaigns in the 20th century.

Unlike Western medicine, TCM strictly relies on the two therapeutic pillars of holism and syndrome differentiation. In this system, the human body is not simply regarded as an entity in which different parts work interdependently but also a portion of the universe in which it is embedded and with which it interacts. Sickness is triggered by the imbalance of Yin and Yang, a concept of contrary but complementary forces in nature, resulting in various symptoms with a dynamic trend in the course of disease. Here, holistic but individualized approaches that use herbal remedies are targeted at the complex syndrome, to help the body regain balance and harmony.

Chronic liver diseases (CLD) have never been described as such in written documentations of TCM. Therefore, it has been difficult to establish a precise description of CLD in modern TCM, and symptomatic terms such as abdominal swelling, yellow skin and right upper abdominal pain were included only in the 1970s [4]. Thereafter, the definition of CLD in TCM was gradually refined to encompass: (1) Weakening of the Qi (biological substances/activities that preserve life); (2) blockage of meridians (circulation channels of Qi) by blood stasis; (3) generation of dampness and heat (inflammatory pathogens) [5]. Only then studies began to systematically examine the effect of TCM on defined CLD [6].Major aims were the eradication or suppression of the underlying cause of CLD, such as HBV or HCV infection, and treatment of its hard endpoints, cirrhosis and HCC, with a major focus on fibrosis. However, there remained problems to reconcile TCM, which traditionally valued empiricism and holistic philosophy, with the Western approach to CLD, such as a reproducible standardization of herbs using quantifiable lead compounds (biologically active ingredients), the frequent lack of rigorous stratification of patients or absence of a double-blind, randomized, placebo-controlled clinical trial design. Moreover, mechanistic preclinical validation of TCM drugs is still in its infancy, with a focus on select cultures of liver cells and cell lines, and a relatively narrow spectrum of in vivo rodent models of liver inflammation and fibrosis. Finally, some TCM drugs have been accused of negligent safety evaluation, based on case reports of hepatotoxicity or nephrotoxicity [7],largely due to contamination with heavy metals or toxic alkaloids. However, the Chinese government has begun to initiate a national safety plan in 2011, investing in the modernization of TCM ($100 million from the National Natural Science Foundation in 2012), to promote research on lead compound identification and mechanisms of action, on a better standardization and well controlled clinical trials.

Thus numerous clinical trials, some of them NIH-registered, were initiated and several formulations received approval by the China Food and Drug Administration. Approved and broadly marketed anti-fibrotic formulations are: Compound 861, an aqueous extract of 10 herbs targeting blood stasis and liver stagnation [8]; Biejiaruangan Compound (CBJRGC), a prescription containing Carapax trionycis (turtle shell) and 10 herbs to soften the liver [9]; Fuzheng Huayu (FZHY), consisting of six herbs, to resolve blood stasis and nourish the liver [10]. Both CBJRBC and FZHY reached sales >$30 million during 2012 in China, and an antifibrotic effect of FZHY has been suggested in a recently completed US FDA-approved trial in patients with chronic hepatitis C [11]. Table 1 lists major published studies on TCM for the treatment of liver fibrosis. 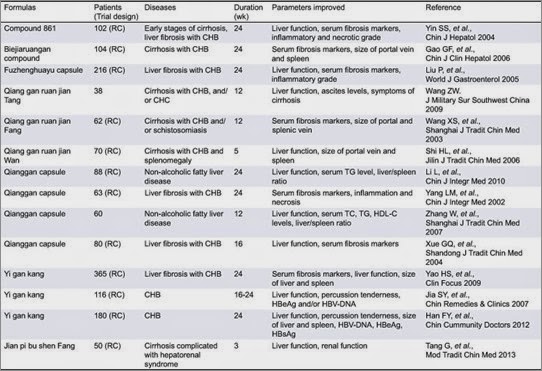 Predictably, TCM should provide a rich resource for developing anti-inflammatory, anti-infectious, and anti-fibrotic drug candidates. A major challenge is its reconciliation with Western medicine, requiring translation of the TCM codes into a more scientific language, and identification of effective lead compounds in the heterogeneous herbal mixtures or extracts. The latter has already been achieved in some cases, revealing, e.g., interesting plant-derived polyphenols, flavonoids or alkaloids that serve as antivirals, antioxidants or anti-fibrotics, often affecting different liver cells and signaling pathways(Fig. 1). However, identification of single active components partly contradicts the holistic theory of TCM which postulates that active ingredients and herbs will not work in isolation, a paradigm that reemerges even in Western medicine. An example is the appreciation of, e.g., the combined effect of nutrition, the intestinal microbiome, and physical exercise on metabolic, liver, and cardiovascular health [12]. Nonetheless, a valid compromise is to test individual compounds in isolation and then recombine agents with proven efficacy. 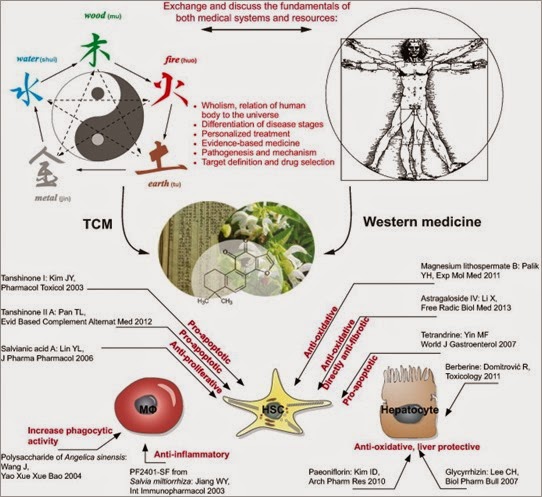 Controversies how to further develop TCM are ongoing in China. One group deplores the modernization of TCM as submission to Western rules, the other group demands its continuing overhaul. There is also a concern of deteriorating drug quality, including contaminants accumulating in cultured herbs. Moreover, many young practitioners feel that adherence to TCM will compromise their career, and patients, especially in the cities, are increasingly skeptical about the efficacy of TCM. Still there is an overwhelming consensus that implementation of methodological improvements and rigorous scientific testing along the principles of evidence-based medicine will help to exploit the vast potential of TCM.

DS received funding from the NIH, European Union, the State of Rhino-Palatinate, the German Research Foundation, and the German Ministry of Education and Research.

The authors who have taken part in this study declared that they do not have anything to disclose regarding funding or conflict of interest with respect to this manuscript.

© 2014 European Association for the Study of the Liver. Published by Elsevier Inc. User rights governed by an Open Access license.

Posted by Hepatitis C Research and News at 8:23 PM No comments:

Accelerated assessment, which is designated to new medicines of major public health interest, was granted by the EMA for AbbVie's investigational HCV regimen in May. Validation of the MAAs confirms that the submissions are complete and starts the EMA's centralized review process. If approved, AbbVie's regimen could be available for marketing in the European Union (EU) in the first quarter of 2015.

The MAAs were submitted on May 8, 2014 and are supported by data from a large clinical program including six Phase III studies of more than 2,300 GT1 patients in over 25 countries. Review of the MAAs will be conducted under the centralized licensing procedure, which, when finalized, provides marketing authorizations in all 28 member states of the EU.

On June 13, AbbVie announced that the New Drug Application (NDA) for AbbVie's regimen was accepted and granted priority review by the U.S. Food and Drug Administration (FDA).

About AbbVie's Investigational HCV Regimen
The AbbVie investigational regimen consists of the fixed-dose combination of ABT-450/ritonavir co-formulated with ombitasvir (ABT-267), and dasabuvir (ABT-333) with or without ribavirin (RBV). The combination of three different mechanisms of action interrupts the hepatitis C virus replication process with the goal of optimizing sustained virologic response rates across different patient populations.

Additional information about AbbVie's Phase III studies can be found on www.clinicaltrials.gov.

AbbVie's HCV Development Program
The AbbVie HCV clinical development program is intended to advance scientific knowledge and clinical care by investigating an interferon-free, all-oral regimen with and without RBV with the goal of producing high sustained virologic response rates in as many patients as possible, including those that typically do not respond well to treatment, such as previous non-responders to interferon-based therapy or patients with advanced liver fibrosis or cirrhosis.

ABT-450 was discovered during the ongoing collaboration between AbbVie and Enanta Pharmaceuticals (NASDAQ: ENTA) for hepatitis C virus protease inhibitors and regimens that include protease inhibitors. ABT-450 is being developed by AbbVie for use in combination with AbbVie's other investigational medicines for the treatment of hepatitis C.

About AbbVie
AbbVie is a global, research-based biopharmaceutical company formed in 2013 following separation from Abbott Laboratories. The company's mission is to use its expertise, dedicated people and unique approach to innovation to develop and market advanced therapies that address some of the world's most complex and serious diseases. AbbVie employs approximately 25,000 people worldwide and markets medicines in more than 170 countries. For further information on the company and its people, portfolio and commitments, please visit www.abbvie.com. Follow @abbvie on Twitter or view careers on our Facebook or LinkedIn page.

Additional information about the economic, competitive, governmental, technological and other factors that may affect AbbVie's operations is set forth in Item 1A, "Risk Factors," in AbbVie's 2013 Annual Report on Form 10-K, which has been filed with the Securities and Exchange Commission.

AbbVie undertakes no obligation to release publicly any revisions to forward-looking statements as a result of subsequent events or developments, except as required by law.

Posted by Hepatitis C Research and News at 11:38 AM No comments: