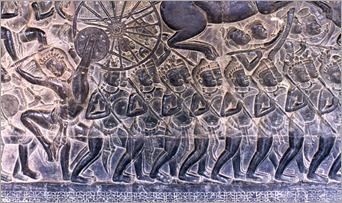 Just days before Gilead's first-in-class hepatitis C virus (HCV) drug was approved by the US Food and Drug Administration on 6 December, the specialist antiviral company Idenix filed two lawsuits in the United States, alleging that sofosbuvir infringes on their patents. Given that the drug is poised to make estimated peak annual worldwide sales of almost US$5.3 billion, the battle for who owns the intellectual property to the drug is likely to be fierce. Indeed, Roche and Merck are also claiming they have patent rights to sofosbuvir.

Sofosbuvir (Sovaldi; also known as GS-7977) is a nucleotide analogue prodrug that inhibits the HCV RNA polymerase NS5B, which is crucial for viral replication. Importantly, the drug is part of the first oral drug regimen that will allow patients to be treated without interferon (see Nature Rev. Drug Discov. 13, 5–7; 2013). If Gilead prevails in its patent disputes, its key patents for sofosbuvir will expire in 2025 (US 7429572) and 2029.

In the first district court filing, Idenix and their collaborator the University of Cagliari are seeking to ascertain that sofobuvir infringes on patents US 6914054 and US 7608597, which claim treatment of HCV using 2-methyl nucleosides. In the second district court filing, Idenix's additional collaborators are the French National Centre for Scientific Research (CNRS) and Montpellier 2 University. Together, they allege that sofosbuvir infringes on a patent (US 7608600) that claims modified 2′ and 3′ nucleoside prodrugs for treating Flaviviridae virus infections.

In addition, the second lawsuit states that Idenix's '600 patent and a patent owned by Gilead's predecessor Pharmasset (US 8415322, which describes modified fluorinated nucleoside analogues) both try to claim the same invention. Because Idenix asserts that it was the first to file its application, it should have “priority of invention” for the overlapping claims, and so be awarded the patent at the expense of Gilead. Another dispute between Gilead and Idenix, involving their respective patent and patent applications related to 2′ methyl, 2′ fluoryl nucleotide, is before the US Patent and Trademark Office. Moreover, the two companies are also at loggerheads over related patents in Canada, Norway and Australia.

Merck (as Merck and Co. and Merck Sharp & Dohme), together with Isis Pharmaceuticals, is also waging in on the patent battle against Gilead. Last summer, Merck allegedly asked Gilead to license two patents — US 7105499 and US 8481712, which describe nucleoside derivatives as inhibitors of RNA-dependent RNA viral polymerase — and their counterparts in other countries by paying Merck a 10% royalty on net sales of sofosbuvir. Gilead disagreed, and promptly filed a lawsuit, seeking to determine that it either did not infringe the '499 and '712 patents, or that the patents were invalid.

Gilead notes that Roche also claims that it is entitled to receive licence fees for sofosbuvir. Roche partnered with Pharmasset — which was purchased by Gilead for a mammoth US$11.2 billion in 2011 — to develop PSI6130, a cytidine analogue that is also an NS5B inhibitor (the development of which has now been discontinued). Roche alleges that sofosbuvir is a prodrug of PSI6130 and therefore it is entitled to an exclusive licence. Gilead contends that Roche is not entitled to such a licence because the collaboration between Roche and Pharmasset ended before Gilead bought Pharmasset.

So, the recent approval of sofosbuvir in the United States and its anticipated marketing authorization in Europe and other regions heralds a new era for the treatment of HCV, but Gilead will have to await the outcome of these ongoing patent fights, and probably appeals, before knowing whether it has to share the revenue.

Posted by Hepatitis C Research and News at 8:21 AM 1 comment: