Peregrine Pharmaceuticals, Inc., a clinical-stage biopharmaceutical company engaged in development of monoclonal antibody-based drugs, has initiated an investigator-sponsored trial, or IST, for patients with advanced hepatocellular carcinoma, or HCC, or liver cancer.

Currently, Peregrine's bavituximab is being evaluated in combination with chemotherapy in multiple phase II trials in non-small cell lung cancer and advanced breast cancer, as well as a phase Ib trial for hepatitis C virus (HCV) and HIV coinfection.

"In prior studies, bavituximab has demonstrated broad therapeutic potential in multiple oncology indications," said Marvin R. Garovoy, M.D., head of clinical science at Peregrine Pharmaceuticals. "Our IST program is designed to provide valuable clinical data on bavituximab's potential use in different therapeutic combinations and indications. We also expect to further clarify details of bavituximab's multiple mechanisms of action, and to identify specific biomarkers that could ultimately help to measure and predict bavituximab's potential anti-tumor and immunostimulatory effects. We look forward to collaborating with Dr Yopp and his team, as well as other investigators who have applied for our program."

Source
Posted by Hepatitis C Research and News at 3:56 PM No comments: 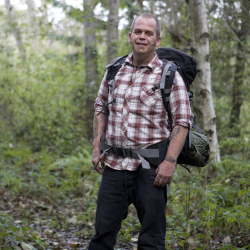 In the age of freeways and airplanes, transportation is fast and efficient, if not a little dehumanizing. We live in a time in which most people hop in their cars to run even the smallest errand. But this winter, one Santa Cruz resident is ditching his car and hitting the road for a transcontinental trip—on foot.

Meet Joseph Melsha. On Friday, Nov. 26, the Santa Cruz native embarked on a journey that will take him through the United States, with nothing more than a bag stocked with basic amenities (a tent, flashlight, and a small camp stove) on his back and a sturdy pair of walking shoes on his feet. He has plotted a course that will take him to his final destination in Boston, Mass.

Melsha isn’t walking across the United States merely for fun; he’s putting his feet to use to raise awareness throughout the country about a harmful disease, Hepatitis C. Melsha lost his mother to Hepatitis C in 2005. His sister, who lives in Boston, currently lives with the condition, and Melsha’s venture through the country will ultimately lead him to her.

“Walking is the easy part,” Melsha says. “I’ve been walking since I was a year old.” However, walking across the country at the onset of winter is another story. The brutal Midwestern winter prevented Melsha from taking a linear route across the country. Instead, he will tread southward towards Santa Monica and then follow Route 66 through the southwest. He plans to eventually end up in Jacksonville, Fla. before making the final trek up north to Boston.

Melsha decided to walk to Boston to raise awareness on a whim. “In this economy, it’s hard to find work,” he says. “I just felt like I wanted to do something positive with my time … and then I decided I need to see my sister … I just decided, ‘I’m walking to Boston! See everyone in a few months!’”

He decided to make his journey to see his sister an effort that would galvanize the public and spread knowledge about Hepatitis C. Hepatitis C is a disease caused from the Hepatitis C virus. It infects the liver and can lead to cirrhosis, liver cancer, and other permanent or long-term liver damage, according to WebMD. The virus gets spread through contact with infected blood. The Center for Disease Control (CDC) reports that approximately 3.2 million people in the United States live with chronic Hepatitis C.

Spreading awareness by walking will be more effective than by travelling through the country by other means because “it takes longer, and it’s a big deal,” says Melsha. “Everybody wonders, ‘So what, Hep. C?’ and then ‘What’s Hep. C?’ and I’ve already raised a tremendous amount of awareness and I haven’t even started walking yet.”

Just days before he set off, Melsha told Good Times that he was encouraged by the attention he had already received from fellow Santa Cruzans. “Everywhere I go people are like, ‘Oh, hey you’re Joe Melsha.’ These are people I’ve never seen before, at places like the grocery store,” he says.

In addition, Melsha has received a lot of electronic support. “Every morning I have over 200 emails with people sharing their stories,” he says. “I wake up crying basically. They’re saying such nice things. Already this has exceeded my expectations.” His visibility can in part be measured through the popularity of his Facebook page, which now receives a barrage of friend requests daily.

As he walks, Melsha will periodically update his fans and followers with photo and video updates on his Facebook page as well as on his personal website, joemelsha.com. These updates will occur whenever he has access to a computer. (“It’s all very informal,” he says.) He plans on walking 10 to 12 hours a day for as long as it takes for him to reach Boston. Although he hasn’t been training at a gym (“I’ve been training by eating Twinkies and staying on my feet … trying to gain a little weight before the journey,” he quips), Melsha feels that he could make it to Boston in as little as 100 days. He estimates the walk will actually take him about six months to complete.

As he walks and educates those he meets, Melsha hopes to inspire others to find a cause they are passionate about. He says, “I want to show people [that] you can do something with your life … You don’t have to be anyone, I’m just Joe Melsha, and I’m just walking.”

Source
Posted by Hepatitis C Research and News at 3:51 PM No comments: