Organs From High Risk Patients May Be Okay for Donation

(dailyRx News) People at risk for certain infectious diseases are usually disqualified from being blood donors. However, new research suggests that they may still be safe organ donors.

A recent study looked at organ recipients who received organs from donors who were at high-risk for infection with HIV or the hepatitis viruses B and C.

The results of the study showed that the vast majority of these organ recipients were doing well and showed no signs of infection more than two years later.

Moya Gallagher, RN, from New York-Presbyterian Hospital/Columbia University Medical Center, led this investigation into organ selection guidelines for donors who may have had certain types of infections.

According to the authors of this study, roughly 10 percent of kidneys procured for organ donation met the criteria laid out by the Centers for Disease Control and Prevention (CDC) as “high-risk” for infection and possible transference of the disease to the organ recipient.

For this study, the researchers looked at 170 organ transplant patients who had been given a kidney from a donor with a high-risk for infection.

All of the recipient patients were given the standard of care immunosuppressive medications for organ transplant recipients.

Most of the patients had been on an organ wait list for an average of 1.7 years and 27.7 percent of them experienced some level of delayed function with the organ after transplant.

After 2.4 years from the time of the organ transplant, 86.5 percent of the organ recipients were doing well with no evidence of having picked up the infection present in the organ donor.

The study authors concluded that all 170 of the high-risk organs were relatively safe for the recipients, and that donors with risk factors for HIV, HCV or HBV should be labeled as “identified risk” instead of “high risk.”

“Utilization of these organs represents an opportunity for shortening wait time for patients while providing good outcomes and an extremely low level of risk for transmission of infections,” Gallagher said in a press statement.

Michelle Segovia, Senior Communications Coordinator for the northern region of the Texas Organ Sharing Alliance (TOSA), said "Organ Procurement Organizations (OPO) conduct extensive medical screenings to assess the quality of organs and identify the risk of transmittable diseases such as HIV and Hepatitis B and C. At our organization, HIV would be an automatic rule out for donation but donors with Hepatitis B and C can certainly donate to a patient who already has Hepatitis."

She continued, "There are more than 120,000 people awaiting a life-saving transplant in this country and 19 die each day because of the drastic organ shortage. Transplant centers, OPOs and the CDC recognize that a patient’s risk of dying without a transplant is often much higher than the possible risk of acquiring a disease."

This study was presented at the American Society of Nephrology Kidney Week 2013 in Atlanta, Georgia. This study has not yet been published in a peer-reviewed journal.

Posted by Hepatitis C Research and News at 9:29 PM No comments: 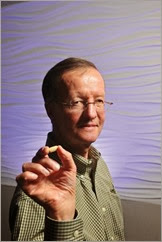 A kinder, gentler hepatitis C treatment from Gilead Sciences Inc. — seen as a potential cure for the debilitating and deadly liver disease — was green-lighted Friday by an FDA advisory panel.

The Food and Drug Administration isn't required to follow the committee's recommendation — which was unanimous in this case — but often does. What's more, FDA staff gave the drug, called sofosbuvir, a favorable review earlier this week.

The FDA is expected to approve the drug — actually a once-a-day combination of sofobuvir with antiviral ribavirin in adults with chronic hepatitis C with genotype 2 and 3 infection — by Dec. 8.

Foster City-based Gilead (NASDAQ: GILD) acquired the drug as part of its $11 billion January 2011 buyout of Pharmasset Inc. But the initial use of the drug is only the first step toward a crucial one-pill oral cure for the leading cause of liver cancer. Gilead is working on a combination of sofoxbuvir and another drug it is developing, called ledipasvir, that targets the largest subset of hepatitis C patients.

Gilead, led by CEO John Martin, hopes to follow up that with another once-daily combination, called GS-5816, aimed at obliterating the virus in all hepatitis C patients.

Gilead has faced criticism from some patients and their advocates, however, because it opted not to work with Bristol-Myers Squibb, Pharmasset's one-time partner.

Sofosbuvir is part of a new class of hepatitis C treatments — nicknamed "nucs" — that block a specific enzyme of the virus. Besides stunning cure rates from clinical trials, nucs are important because they could shift patients from today's treatment of weekly injections of interferon and ribavirin to an all-oral cure.

An easily dosed cure, Gilead and others say, would increase the number of patients who stay on therapy. The interfron-ribavirin treatment is so brutal, they say, that only about half of patients who start therapy continue with it.

"One argument for not collaborating is, if you do it yourself, you can move faster," Bischofberger told the Business Times earlier this year. "Patients will benefit from this single pill much sooner than in a collaboration."

Posted by Hepatitis C Research and News at 9:12 PM No comments:

Gilead Sciences Inc. (GILD) won the backing of U.S. advisers for its hepatitis C pill, helping solidify the company’s drive to lead the growing market for drugs to defeat the disease.

Gilead’s drug, known as sofosbuvir, should be approved, a panel of outside advisers to the Food and Drug Administration voted unanimously today in Silver Spring, Maryland. The FDA is expected to decide whether to clear sofosbuvir for sale by Dec. 8. The agency doesn’t have to follow the panel’s advice.

Gilead, Johnson & Johnson, AbbVie Inc. (ABBV) and Bristol Myers Squibb Co. are among companies working on new hepatitis C drugs that alleviate the burden of current treatments that include interferon injections, which can cause flu-like symptoms. The market for hepatitis C medicines may reach more than $100 billion over a decade, according to Bloomberg Industries.

“This is a historic vote,” said Daniel Raymond, the consumer representative on the panel and policy director at the Harm Reduction Coalition in New York. “This is the first vote for a interferon-free regimen to treat hepatitis C. This is going to be a very important move forward.”

About 4 million Americans have hepatitis C, which can cause liver cirrhosis, according to the National Institutes of Health. The disease, which is classified into six genotypes, can be passed through infected blood or body fluids, most commonly through needle-sharing by drug users.

Gilead is seeking approval of once-daily sofosbuvir for patients with the genotype 1 form of the infection, the most common type, in combination with pegylated interferon and another pill called ribavirin. The Foster City, California-based company, the world’s biggest maker of AIDS drugs, hopes to gain approval for an all-oral combination that omits interferon for those patients within about a year. Gilead also is seeking sofosbuvir approval in other genotypes with and without interferon.

Sofosbuvir may generate $1.82 billion in sales next year, according to the average of nine analysts’ estimates compiled by Bloomberg. The drug can shrink the current treatment time to 12 weeks from about a year for most patients.

The panel voted 15-0 that sofosbuvir should be approved in combination with pegylated interferon and ribavirin for genotype 1 and genotype 4 patients who haven’t previously been treated. About 70 percent of patients in the U.S. have genotype 1.

The panel also voted 15-0 that the treatment in combination with only ribavirin should be cleared for genotype 2 and genotype 3 patients, which include as much as 25 percent of those with hepatitis C in the U.S. The combination for these patients would be the first all-oral regimen.

Gilead shares fell less than 1 percent to $69.68 at the close in New York.

“There were already high expectations going into the panel and the stock was at its all-time high yesterday already,” said Michael Yee, an analyst at RBC Capital Markets.

The panel today offered glowing reviews of sofosbuvir and discussed a question asked by the FDA about whether patients with genotype 1 hepatitis C who tried other treatments should have access to the drug as well, Yee said in an e-mail. Gilead only studied the treatment in genotype 1 patients who had never been treated before.

“As we reviewed this application we realized how important a drug this was and we also realized that not every patient population was represented,” Debra Birnkrant, director of FDA’s Division of Antiviral Products, said during the meeting.

FDA modeled data to hypothesize whether the drug could be used in treatment-experienced patients.

Advisers voted 19-0 yesterday that a Johnson & Johnson (JNJ) and Medivir AB (MVIRB) hepatitis C medicine known as simeprevir should be approved for genotype 1 patients in combination with pegylated interferon and ribavirin. The drug can reduce current treatment time in half to 24 weeks. Potential simeprevir users need screening for a genetic mutation that renders the drug ineffective.

Analysts assumed treatment-experienced patients would use J&J and Medivir’s drug though Gilead now may be available for those patients, Yee said. He estimates sales of Gilead’s sofosbuvir will total $300 million in the first quarter of next year versus a consensus estimate of $223 million.

For the majority of current patients interferon and ribavirin are combined with Merck & Co.’s Victrelis or Vertex Pharmaceuticals Inc. (VRTX)’s Incivek. Victrelis, Incivek and J&J’s simeprevir are protease inhibitors that battle genotype 1 hepatitis C. Sofosbuvir, if approved, will be the first in a new class of drugs called nucleotide polymerase inhibitors.

Treatment-experienced patients made up 40 percent of first-year sales of Victrelis and Incivek, Yee said. Sales of the two drugs totaled $1 billion in 2011, the year they came on the market, and $1.7 billion last year, according to data compiled by Bloomberg.

To contact the reporter on this story: Anna Edney in Washington at aedney@bloomberg.net

Posted by Hepatitis C Research and News at 8:48 PM No comments: