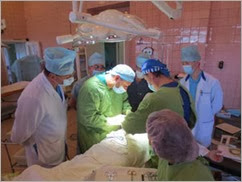 Surgical resection as the first treatment for huge hepatocellular carcinomas was associated with higher 1-, 2-, and 3-year overall survival rates (69.7%, 58.6%, and 51.7%, respectively) compared with TACE (40.2%, 33.9%, and 18.5%, respectively), according to Moon Seok Choi, MD, PhD, of Sungyunkwan University School of Medicine in Seoul, Korea, and colleagues.

The authors noted that patients presenting with huge tumors -- 10 cm or greater in diameter -- have worse survival than those with smaller tumors. Past research has shown that ablative treatment followed by a waiting period was superior to rapid transplantation.

But resection of huge carcinomas is "technically difficult and usually requires major hepatic resection, which can be associated with an increased risk of operative mortality," the current researchers stated.

They compared long-term outcomes for surgical resection versus TACE for huge hepatocellular carcinoma and evaluated potential prognostic factors tied to survival. Resection was performed in 84 patients and TACE was performed in 267 patients from 2000 to 2009.

The primary endpoint was overall survival (OS). Additional outcomes included prognostic factors for OS, and were explored through univariate and multivariate analyses in the propensity score-matched cohort.

Patients who were treated with surgery received follow-up at 3-month intervals for the first 2 years and then every 6 months after, where they underwent liver function tests, serum AFP level measurement, and dynamic liver CT to scan for recurrence.

Those who received TACE underwent two consecutive sessions at 1-month intervals, followed by an outpatient clinic visit 1 month after each treatment cycle, where they received a similar battery of tests to determine tumor status. The chemoembolization was repeated "if clinically feasible and viable tumor was present on the dynamic liver CT."

Prior to propensity score matching, those treated surgically had better 1-, 3-, and 5-year OS than those treated with TACE at 10 months of follow-up (P<0.001).

The authors cautioned that although survival was greater at 1, 3, and 5 years among those treated surgically, that group "had less patients with liver cirrhosis and less patients with portal vein or hepatic vein invasion than the nonsurgical treatment group."

They added that "it remains possible that patients selection factors may have influenced the results, which limits the usefulness of this study."

They also noted that the study was limited by retrospective design, small number of patients, and the inclusion of vessel invasion into matching but not the extent of invasion.

The authors declared that they had no conflicts of interest.

Posted by Hepatitis C Research and News at 7:45 PM No comments:

Chronic hepatitis C (CHC) patients with treatment failure (TF) remain at risk of continuing fibrosis progression. However, it has not been investigated whether there is an increased risk of accelerated fibrosis progression after failed interferon-based therapy. We aimed to investigate long-term influence of TF on fibrosis progression compared with untreated patients with CHC. We studied 125 patients with CHC who underwent paired liver biopsies from 1994 to 2012. Patients with advanced fibrosis were excluded from the analysis. Sixty-three patients had TF, and 62 patients were treatment-naïve (TN). Annual fibrosis progression rate (FPR) was calculated, and significant fibrosis progression (SFP) was defined as ≥2 stage increase in fibrosis during follow-up. Multiple regression analyses were performed to find out independent predictors of FPR and SFP. Demographic characteristics and duration between paired liver biopsies were similar in TF and TN groups. Baseline alanine aminotransferase and gamma-glutamyl transferase (GGT) levels (71 ± 31 vs 47 ± 22, P < 0.001 and 49 ± 39 vs 36 ± 28, P = 0.027, respectively), baseline mean fibrosis stage (2.2 ± 0.7 vs 1.9 ± 0.7, P = 0.018) and histologic activity index (6.3 ± 1.9 vs 4.3 ± 1.6, P < 0.001) were higher in the TF group compared with the TN group. In regression analyses, the strongest independent predictor of fibrosis progression was the GGT level (OR: 1.03, 95%CI 1.01-1.5, P < 0.001). Treatment experience (OR: 5.97, 95%CI 1.81-19.7, P = 0.003) also appeared as an independent predictor of both FPR and SFP. Failed interferon-based CHC treatment may lead to accelerated FPR in the long-term compared with the natural course.

BBSRC funded scientists have shown that human liver cells produced from stem cells meet the current 'gold standard' for assessing drug toxicity, raising the possibility they could be used to develop new therapies for liver disease.

BBSRC and the Medical Research Council (MRC) funded Dr David Hay from the University of Edinburgh to develop a process for creating liver cells from human stem cells, and scaling this up so that shipment could be made to the USA.

In the United States pharmaceutical company Bristol-Myers Squibb paid for the work of Dr Oliver Flint, which showed that the stem-cell derived liver cells detected up to 75% of 20 known liver toxins when incubated at various concentrations over a week. This was the equivalent performance to cells biopsied from human livers; the current option in these kinds of tests.

Posted by Hepatitis C Research and News at 3:58 PM No comments: