Boceprevir versus placebo with pegylated interferon alfa-2b and ribavirin for treatment of hepatitis C virus genotype 1 in patients with HIV: a randomised, double-blind, controlled phase 2 trial

Rates of sustained virological response (SVR) to peginterferon—ribavirin are low in patients with hepatitis C virus (HCV) genotype 1 and HIV. We aimed to assess efficacy and safety of triple therapy with boceprevir plus pegylated interferon alfa-2b (peginterferon) and ribavirin, which increases rates of SVR in patients with HCV alone.

In our double-blind, randomised controlled phase 2 trial, we enrolled adults (18—65 years) with untreated HCV genotype 1 infection and controlled HIV (HIV RNA <50 copies per mL) at 30 academic and non-academic study sites. We randomly allocated patients (1:2) according to a computer generated sequence, stratified by Metavir score and baseline HCV RNA level, to receive peginterferon 1·5 μg/kg per week with weight-based ribavirin (600—1400 mg per day) for 4 weeks, followed by peginterferon—ribavirin plus either placebo (control group) or 800 mg boceprevir three times per day (boceprevir group) for 44 weeks. Non-nucleoside reverse-transcriptase inhibitors, zidovudine, and didanosine were not permitted. The primary efficacy endpoint was SVR (defined as undetectable plasma HCV RNA) at follow-up week 24 after end of treatment. We assessed efficacy and safety in all patients who received at least one dose of study drug. This study is registered with ClinicalTrials.gov, number NCT00959699.

Boceprevir in combination with peginterferon—ribavirin could be an important therapeutic option for patients with HCV and HIV. 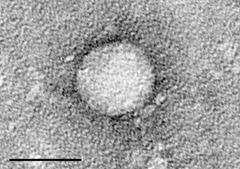 Electron micrographs of hepatitis C virus purified from cell culture. Scale bar is 50 nanometers.
Courtesy of the Center for the Study of Hepatitis C, The Rockefeller University.
Pix - wikipedia

When the fact that Hepatitis C deaths are more than HIV/AIDS related deaths in Manipur was revealed by the Opposition leader in Manipur Assembly a few days ago and the same was published in different morning dailies the next day, many people must have been caught unawares. The severity of the prevalence of Hepatitis C in Manipur was also previously made known through the 11th February 2013's edition of The Telegraph in its front-page news with the headline "Manipur worst hit by Hepatitis C".

In this news, besides highlighting Hepatitis C prevalence in Manipur, the Centre was urged to provide a separate budget for tackling Hepatitis C and also the inclusion of drugs used for the treatment on the list of National Essential Medicines. Because of the high number of intravenous drug users, Manipur has been the worst hit amongthe North-Eastern states. Second comes Nagaland and the third is Mizoram. Manipur's case is unique because of the high HIV/Hepatitis C co-infection rate and according to a recent survey conducted by the Indian Council of Medical Research, 98 percent of HIV-infected people in Churachandpur district were co-infected with Hepatitis C.

Hepatitis B and Hepatitis C represent two of the major threats to global health. Because many people feel no symptoms, both Hepatitis B and C are 'silent' viruses, and one could be infected for years without knowing it. Both Hepatitis B and C can lead to liver cirrhosis where one is exposed to life-threatening complications such as bleeding, ascites, liver cancer and liver failure.

Hepatitis B virus is highly infectious and about 50-100 times more infectious than HIV. The virus is transmitted through blood and other body fluids like saliva, semen and vaginal fluid of an infected person. According to the World Health Organisation (WHO) estimates, two billion people have been infected with the Hepatitis B virus worldwide and approximately 350 million people are living with chronic infections. Unlike Hepatitis C, there is a vaccine that can prevent the infection.

For Hepatitis B: To diagnose the infection of Hepatitis B, the blood needs to be checked for the Hepatitis B surface antigen (HBsAg). The HBs is a part of the virus that mostly appear six to twelve weeks after infection. If the test is positive, it is very likely that one has Hepatitis B and further tests are required for confirmation, to check if the infection is new or old and, to see if one needs treatment or not.WHO recommends that all blood donations are tested for this marker to avoid transmission to recipients.Other tests include:

AWARENESS CAN CHECK THE SPREAD OF HEPATITIS B AND C

World Hepatitis Day is observed every year on July 28 and on this day, health authorities and NGOs across the world hold special programmes to make people aware of these viral infections. Hepatitis C has claimed more lives than HIV because the cost of medicines is very high, and presently, in India there is no government policy to help patients as in the case of HIV/AIDS. A patient has to spend six to eight lakh rupees annually for treatment. Unlike HIV/AIDS, there is no official data as there is no survey conducted to know the exact status of Hepatitis C or B in Manipur.

Spreading awareness remains the key to fighting against Hepatitis B and C. Like in one of the poster campaigns for World Hepatitis Day says, "The clock is ticking. Act now to protect a new generation."

* Dr Th Dhabali Singh wrote this article for The Sangai Express
The writer is Senior Consultant Pathologist and Managing Director, BABINA Diagnostics, Imphal
This article was posted on June 22, 2013.
Posted by Hepatitis C Research and News at 2:17 PM No comments: