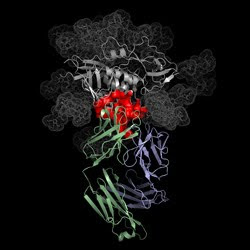 This image shows the atomic structure of the antibody VRC01 (blue and green) binding to HIV (grey and red). The precise site of VRC01-HIV binding (red) is a subset of the area of viral attachment to the primary immune cells HIV infects
Credit: NIAID VRC
National Institute of Allergy and
Infectious Diseases (NIAID)
http://www.niaid.nih.gov/

Scientists have discovered two potent human antibodies that can stop more than 90 percent of known global HIV strains from infecting human cells in the laboratory, and have demonstrated how one of these disease-fighting proteins accomplishes this feat. According to the scientists, these antibodies could be used to design improved HIV vaccines, or could be further developed to prevent or treat HIV infection. Moreover, the method used to find these antibodies could be applied to isolate therapeutic antibodies for other infectious diseases as well.

“The discovery of these exceptionally broadly neutralizing antibodies to HIV and the structural analysis that explains how they work are exciting advances that will accelerate our efforts to find a preventive HIV vaccine for global use,” says Anthony S. Fauci, M.D., director of the National Institute of Allergy and Infectious Diseases (NIAID), National Institutes of Health. “In addition, the technique the teams used to find the new antibodies represents a novel strategy that could be applied to vaccine design for many other infectious diseases.”

Led by a team from the NIAID Vaccine Research Center (VRC), the scientists found two naturally occurring, powerful antibodies called VRC01 and VRC02 in an HIV infected individual's blood using a novel molecular device they developed that hones in on the specific cells that make antibodies against HIV. The device is an HIV protein that the scientists modified so it would react only with antibodies specific to the site where the virus binds to cells it infects.

The scientists found that VRC01 and VRC02 neutralize more HIV strains with greater overall strength than previously known antibodies to the virus.

The researchers also determined the atomic-level structure of VRC01 when it is attaching to HIV. This has enabled the team to define how the antibody works and to precisely locate where it attaches to the virus. With this knowledge, they have begun to design components of a candidate vaccine that could teach the human immune system to make antibodies similar to VRC01 that might prevent infection by the vast majority of HIV strains worldwide.

“We have used our knowledge of the structure of a virus—in this case, the outer surface of HIV—to refine molecular tools that pinpoint the vulnerable spot on the virus and guide us to antibodies that attach to this spot, blocking the virus from infecting cells,” explains Dr. Nabel, the VRC director.

Finding individual antibodies that can neutralize HIV strains anywhere in the world has been difficult because the virus continuously changes its surface proteins to evade recognition by the immune system. As a consequence of these changes, an enormous number of HIV variants exist worldwide. Even so, scientists have identified a few areas on HIV’s surface that remain nearly constant across all variants. One such area, located on the surface spikes used by HIV to attach to immune system cells and infect them, is called the CD4 binding site. VRC01 and VRC02 block HIV infection by attaching to the CD4 binding site, preventing the virus from latching onto immune cells.

“The antibodies attach to a virtually unchanging part of the virus, and this explains why they can neutralize such an extraordinary range of HIV strains,” says Dr. Mascola, the deputy director of the VRC.

With these antibodies in hand, a team led by Dr. Kwong, chief of the structural biology section at the VRC, determined the atomic-level molecular structure of VRC01 when attached to the CD4 binding site. They then examined this structure in light of natural antibody development to ascertain the steps that would be needed to elicit a VRC01-like antibody through vaccination.

Antibody development begins with the mixing of genes into new combinations within the immune cells that make antibodies. Examination of the structure of VRC01 attached to HIV suggested that, from a genetic standpoint, the immune system likely could produce VRC01 precursors readily. The researchers also confirmed that VRC01 does not bind to human cells—a characteristic that might otherwise lead to its elimination during immune development, a natural mechanism the body employs to prevent autoimmune disease.

In the final stage of antibody development, antibody-producing B cells recognize specific parts of a pathogen and then mutate, or mature, so the antibody can bind to the pathogen more firmly. VRC01 precursors do not bind tightly to HIV, but rather mature extensively into more powerfully neutralizing forms. This extensive antibody maturation presents a challenge for vaccine design. In their paper, Dr. Kwong and colleagues explore how this challenge might be addressed by designing vaccine components that could guide the immune system through this stepwise maturation process and facilitate the generation of a VRC01-like antibody from its precursors. The scientists currently are performing research to identify these components.

“The discoveries we have made may overcome the limitations that have long stymied antibody-based HIV vaccine design,” says Dr. Kwong.

The two research teams included NIAID scientists from the VRC, the Laboratory of Immunoregulation, and the Division of Clinical Research, all in Bethesda, Md.; as well as researchers from Beth Israel Deaconess Medical Center in Boston; Columbia University in New York; Harvard Medical School and Harvard School of Public Health in Boston; The Rockefeller University in New York City; and University of Washington in Seattle.

NIAID conducts and supports research—at NIH, throughout the United States, and worldwide—to study the causes of infectious and immune-mediated diseases, and to develop better means of preventing, diagnosing and treating these illnesses. News releases, fact sheets and other NIAID-related materials are available on the NIAID Web site at www.niaid.nih.gov.

The National Institutes of Health (NIH)—The Nation's Medical Research Agency—includes 27 Institutes and Centers and is a component of the U. S. Department of Health and Human Services. It is the primary federal agency for conducting and supporting basic, clinical and translational medical research, and it investigates the causes, treatments and cures for both common and rare diseases. For more information about NIH and its programs, visit www.nih.gov.

Source
Posted by Hepatitis C Research and News at 7:43 AM No comments: