World Hepatitis Day 2013: This is hepatitis. Know it. Confront it.

On the 28th of July, countries around the globe will commemorate the third annual World Hepatitis Day. One of only eight health campaigns recognized by the World Health Organization, this health observance raises awareness of the silent yet growing epidemic of viral hepatitis worldwide. Globally, each year, 1.4 million persons lose their life to viral hepatitis (as reported in the Global Burden of Disease Study 2010), approaching the number of deaths from HIV/AIDS (1.5 million) and surpassing mortality from tuberculosis and malaria (1.2 million each).

Deaths from viral hepatitis are caused by one of five hepatitis viruses. Hepatitis A and hepatitis E, which spread through person-to-person contact and contaminated food or water, are major causes of acute hepatitis, particularly in areas of the developing world suffering from poor hygiene. Hepatitis B virus (HBV) and hepatitis C virus (HCV) cause chronic infection that can result in liver disease and death. Hepatitis D requires hepatitis B for replication, and co-infection with both viruses increases the risk of severe liver disease. Worldwide, 240 million people have chronic hepatitis B infection, and 180 million are living with hepatitis C.

Hepatitis B vaccination has been a profound and enduring achievement in prevention of viral hepatitis. Since 1982, more than one billion doses of hepatitis B vaccine have been administered worldwide, preventing an estimated 3.7 million deaths. Because HBV can be transmitted from mother to child at birth, vaccinating newborns, preferably within 24 hours of delivery, can prevent 85% of HBV infections transmitted from infected mothers to their children. Unfortunately, several barriers  prevent universal provision of a birth dose of hepatitis B vaccine globally, including education of healthcare workers, timely access to newborns delivered at home, and lack of coordination between immunization and maternal and child health care providers. As a result of these obstacles, as few as one in four infants worldwide receive hepatitis B vaccine within 24 hours of birth. However, in China, which shoulders 50% of the global burden of hepatitis B mortality, these challenges have been overcome through increasing the number of infants born in birthing facilities and through obstetrical staff acceptance of the responsibility to vaccinate newborns against hepatitis B. As a result, birth dose coverage increased from 40% in 1992-1997 to 74% in 2002-2005 (Vaccine. 2010 Aug 23;28(37):5973-8). 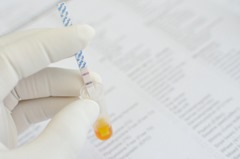 The benefits of vaccination will soon be joined by the benefits of viral hepatitis care and treatment particularly for hepatitis C. Effective, oral antiviral medications are now available to treat chronic HBV infection; 90% of HBV patients treated with one of these antivirals achieve viral suppression. Although a vaccine for hepatitis C remains elusive, antiviral therapies for HCV play a critical role in preventing disease progression and can lead to virologic cure. New all-oral therapeutic options anticipated for the near future are expected to require shorter durations of treatment (e.g. 12-24 weeks rather than the current 24-48 week regimens), improve rates of viral clearance, and cause fewer serious adverse events. The benefits associated with medical management and therapy can only be realized when persons with chronic viral hepatitis infections are identified through testing and linked to needed care. Unfortunately, barriers to viral hepatitis testing and referral persist worldwide. They include a low level of HBV- and HCV-related knowledge among the public and providers, inadequate screening policies, the affordability of treatment, inequitable access to care for marginalized populations, and limitations in health infrastructure that compromise testing and disease surveillance. As a result, many if not most persons infected with HBV or HCV are unaware of their infection, and a smaller proportion of infected persons receive proper care and treatment.

Timely changes in national policies can elicit significant changes in the way countries approach viral hepatitis prevention and control. For instance, to reflect current hepatitis C epidemiology, HCV testing recommendations were recently expanded in the United States. In 2013, CDC and the US Preventive Services Task Force called for both risk-based screening and one-time screening of persons born from 1945 through 1965, among whom the burden of HCV infection is highest. The new recommendations are expected to improve identification of people living with chronic HCV infection and enhance linkage to care and treatment for those found to be infected.

These recommendations must be accompanied by improvements in care and treatment. For example, professional training regarding viral hepatitis can be improved and best practices for delivering these services identified. Further, countries can expand laboratory capacity to include appropriate diagnostics (e.g. laboratory-based or point-of-care tests) and virologic supplemental testing to confirm current infection and quantify viral load. Policy directives also can highlight opportunities for cost-effective integration of services, including incorporating HCV and HBV prevention and care services into other services and encouraging the use of telemedicine to expand access to testing, care, and treatment.

The global burden of viral hepatitis is tremendous. With new opportunities for improved viral hepatitis prevention and control coming to light worldwide, increased communication and collaboration between policymakers, community organizations, providers, and the public will become even more critical to overcoming significant barriers to prevention and control. Annual commemoration of World Hepatitis Day creates an impetus for such collaboration by raising viral hepatitis awareness and eliciting the actions needed to prevent new infections and improve health outcomes for those already infected.

John Ward, MD, is Director of the CDC’s Division of Viral Hepatitis and Clinical Assistant Professor at Emory University School of Medicine.

Posted by Hepatitis C Research and News at 7:55 PM No comments:

On World Hepatitis Day, the World Hepatitis Alliance has called for urgent attention to be given to recent figures showing that although viral hepatitis kills as many as HIV/AIDS, the great majority of countries have no programmes in place to tackle it.

The Global Burden of Disease study released last year in the Lancet shows that viral hepatitis was responsible for almost 1.45 million deaths in 2010, the same as HIV/AIDS and significantly more than TB or Malaria. Despite this enormous annual death toll, leaders in global health consistently leave it off their agendas.

'Viral hepatitis is the 8th leading cause of death worldwide, killing as many people as HIV/AIDS every single year' says Charles Gore, President of the World Hepatitis Alliance. '500 million people worldwide are chronically infected. In the face of these numbers how is it possible that viral hepatitis receives so little priority across the world?'

Currently, diseases receive attention and funding depending on their global priority. However the global priority list does not necessarily reflect the real burden of disease. This has led to responses that are disproportionate to disease impact, and has left some diseases tragically under-resourced. Viral hepatitis is a clear example; despite its huge burden there is little global pressure to address it. Consequently, the majority of governments have failed to dedicate resources to viral hepatitis, even in countries where prevalence is up to 20%.

The Global Report released by the World Health Organization last week showed the extent to which viral hepatitis is ignored. Only 37% of countries have a national strategy or plan for viral hepatitis, and less than 30% reported having a department responsible solely for viral hepatitis related activities. The lack of response to the world's 8th biggest killer is truly baffling. Not only does it put millions of lives at risk by allowing this silent epidemic to grow, it leaves the 500 million people who are chronically infected wholly abandoned without support or recognition.

In 2010 the World Health Organisation openly recognised that viral hepatitis is a major cause for concern by making World Hepatitis Day one of only 7 world health days officially recognised by WHO and all Member States. However, major changes to the global health landscape are yet to be seen. This World Hepatitis Day, the World Hepatitis Alliance has therefore launched a mass awareness campaign under the theme 'This is hepatitis. Know it. Confront it.' to encourage people to find out more and to confront the silence around the disease.

The Alliance is also co-ordinating a global Guinness World Record attempt for the number of people performing the 'see no evil, hear no evil, speak no evil' actions at the same time, actions chosen because in the same way the Three Wise Monkeys ignore the world around them, so the world has been ignoring viral hepatitis. With 58 teams from 25 countries around the world taking part, this is a considerable challenge but with a clear message: viral hepatitis is a silent epidemic. Know it. Confront it.

Notes to the Editor

The World Hepatitis Alliance is a non-governmental umbrella organisation with 165 member patient groups in 66 countries. Representing 500 million people living with viral hepatitis worldwide, the Alliance strives to support and promote patient voices, to raise the profile of viral hepatitis and to establish comprehensive hepatitis strategies in all countries. The World Hepatitis Alliance has been a dominant voice in achieving various successes for people living with hepatitis, including leading the patient community in calling for the WHO resolution on hepatitis. Through better awareness, prevention, care, support and access to treatment, their ultimate goal is to work with governments to eradicate these diseases.

On 28 July 2013, the World Hepatitis Alliance will coordinate the sixth global World Hepatitis Day, one of only four official disease-specific health awareness days recognised by the World Health Organization (WHO) and endorsed by its 194 member states. The aim for 2013 is to raise awareness of chronic hepatitis B and C around the globe and to drive policy change for improvements in health outcomes for patients.

Hepatitis B and C

500 million people are living with chronic viral hepatitis. Hepatitis B and C are 'silent' viruses, because people may experience no symptoms. If left untreated and unmanaged, hepatitis B or C can lead to advanced liver scarring (cirrhosis) liver cancer or liver failure.

Posted by Hepatitis C Research and News at 12:53 AM No comments: