If You Can't Make Own Drug, Take Gilead's

Fierce Biotech reports that Gilead is getting a lot of attention from rivals Merck and Roche as its hepatitis C drug, sofosbuvir, approaches expected approval by FDA in December of this year.  Idenix is also claiming its place in line to grab for sofosbuvir by including the drug in a list of metabolites it claims in ints patents.

You may remember that Gilead bought Pharmasset for a startling $11B a few years ago to gain control of this very drug. The drug is considered to be a potential game changer in hepatitis C treatment.  Analysts variously estimate peak sales to be in $4B to $5B range.

Gilead says Roche's claim has no merit.  It says any agreement that it had with Pharmasset ended several years before it even purchased the company.  Gilead also says its own patent cover sofosbuvir and dismisses merit of any Idenix patents.  That leaves Merck which claims Gilead should pay it 10% royalties on sofosbuvir sales due to two patents it holds that it claims Gilead would need to practice.  It gave Gilead until today to respond to its claims.

It's clear that this property is valuable so anyone -- even with a tenuous claim -- may find it to be well worth the legal investment to try to get in on the action.  Legal costs are much likely to be far less than costs that would be incurred to actually invent ones own drug, right?

Posted by Hepatitis C Research and News at 10:43 PM No comments:

Safety and Efficacy of Protease Inhibitors to Treat Hepatitis C After Liver Transplantation: a Multicenter Experience

Protease inhibitors (PI) with peg-interferon/ribavirin have significantly improved SVR rates in HCV G1 patients. Their use to treat HCV recurrence after liver transplantation (LT) is a challenge.

Eighteen patients were treatment-naive, five were relapsers and 14 were non-responders to dual therapy after LT. Twenty-two patients received cyclosporine and 15 tacrolimus. After 12 weeks of PI therapy, a complete virological response was obtained in 89% of patients treated with boceprevir, and 58% with telaprevir (P=0.06). The end of treatment virological response rate was 72% (13/18) in the boceprevir group and 40% (4/10) in the telaprevir group (P=0.125). A sustained virological response 12 weeks after treatment discontinuation was observed in 20% (1/5) and 71% (5/7) of patients in the telaprevir and boceprevir groups, respectively (P=0.24). Treatment was discontinued in 16 patients (treatment failures (n=11), adverse events (n=5)). Infections occurred in ten patients (27%), with three fatal outcomes (8%). The most common adverse effect was anemia (n=34, 92%), treated with erythropoietin and/or a ribavirin dose reduction; thirteen patients (35%) received red blood cell transfusions. The cyclosporine dose was reduced by 1.8±1.1-fold and 3.4±1.0-fold with boceprevir and telaprevir, respectively. The tacrolimus dose was reduced by 5.2±1.5-fold with boceprevir and 23.8±18.2-fold with telaprevir.

Our results suggest that triple therapy is effective in LT recipients, particularly those experiencing a severe recurrence. The occurrence of anemia and drug-drug interactions, and the risk of infections, require close monitoring.

Posted by Hepatitis C Research and News at 9:40 PM No comments: 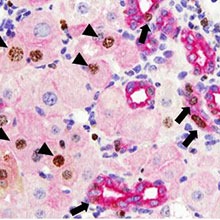 Posted by Hepatitis C Research and News at 9:28 PM No comments: