Copyright © 2013 American Association for the Study of Liver Diseases

To assess the association between sustained virological response (SVR) and all-cause mortality in patients with chronic HCV infection and advanced hepatic fibrosis.

Posted by Hepatitis C Research and News at 6:57 PM No comments: 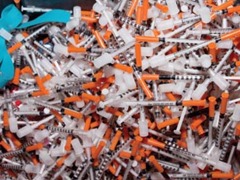 Dr Muhammad Zafar said his department has received reports of patients refusing the treatment from hospitals in Mardan, Abbottabad and a few other districts. PHOTO: FILE

PESHAWAR: The number of patients visiting government-run hospitals to avail free treatment for hepatitis C has decreased slightly after the procurement of substandard hepatitis C curing interferon injections became known to the public.

“People have been reading newspapers and are now reluctant to get free medication for hepatitis C virus (HCV) treatment,” said a doctor treating HCV patients at the Lady Reading Hospital (LRH).

He said patients are fearful they might die of the free treatment as the Anti-Corruption Establishment (ACE) team probing the incident had confirmed the death of seven people after the use of the spurious medication. “The patients prefer to get treatment at private hospitals rather than visiting state-run establishments,” he added.

On the other hand, Dr Amir Ghaffur, another doctor treating HCV patients at the LRH, begs to differ.

“We continue to run this programme. Patients visit the out-patient department and I don’t think their numbers have reduced,” he claimed.

However, Director General Health Khyber-Pakhtunkhwa (K-P) Dr Muhammad Zafar said his department has received reports of patients refusing the treatment from hospitals in Mardan, Abbottabad and a few other districts.

The managements of these hospitals have complained that the patients are afraid of getting free HCV treatment.

Zafar further added the health department had bought a new stock of HCV curing injections from another company and 95,000 vials, tested by the Central Drug Laboratory Islamabad, were available with it.

“Patients should not refuse the medication anymore. I have talked to the health secretary and will convene a meeting on Monday (today) to discuss the issue further,” Zafar informed. “We will request the media to highlight the current situation in the same manner as it did when the scam surfaced,” he added.

The issue of procurement of substandard interferon injections by the K-P Health Department came to light on February 6 when the Peshawar High Court (PHC) took notice of the supply of bogus medicines to public hospitals and directed the ACE to probe the issue and arrest all those involved.

“You are playing with the lives of underprivileged people. Those involved need to be hanged publically,” PHC Chief Justice Dost (CJ) Muhammad Khan was quoted as telling health department officials during a case hearing of the Rs250 million scam.

Another suspect, former DG Health Dr Muhammad Ali Chohan managed to obtain pre-arrest bail and tried to confirm his bail. However, his pre-arrest bail was not extended by Justice Khan and Chohan was arrested from the court room on May 24.

Posted by Hepatitis C Research and News at 5:19 PM No comments:

Department of Gastroenterology, Graduate School of Medicine, The University of Tokyo, Tokyo, Japan.

BACKGROUND: IL28B polymorphisms were shown to be associated with a response to peg-interferon-based treatment in chronic hepatitis C (CHC) and spontaneous clearance. However, little is known about how this polymorphism affects the course of CHC, including the development of hepatocellular carcinoma (HCC). We evaluated the influence of IL28B polymorphisms on hepatocarcinogenesis in CHC patients.

METHODS: We genotyped the rs8099917 single-nucleotide polymorphism in 351 hepatitis C-associated HCC patients without history of IFN-based treatment, and correlated the age at onset of HCC in patients with each genotype.

CONCLUSIONS: The IL28B minor allele was associated with lower inflammatory activity and less progressed fibrosis of the liver; however, it constituted a risk factor for younger-age onset of HCC in CHC patients.

Posted by Hepatitis C Research and News at 3:17 PM No comments:

BACKGROUND: Advances in hepatitis C virus (HCV) treatment have yielded improved virological response rates, and yet, many individuals with psychiatric illness still fail to receive HCV therapy. Concerns about safety, adherence, and efficacy of HCV treatment are compounded and treatment is further deferred when substance use is also present. This is especially problematic given the disproportionately high rates of both mental health issues and substance use among individuals living with HCV.

OBJECTIVE: This study sought to examine HCV treatment outcomes in clients with serious mental illness (SMI) and with high rates of active substance use who were participating in a community-based HCV treatment program.

PATIENTS AND METHODS: A retrospective chart review of 129 clients was carried out. Patients were classified as having an SMI if they had a history of bipolar disorder, psychotic disorder, past suicide attempt or mental health related hospitalization.

RESULTS: Fifty-one patients were defined as having an SMI. Among the 46 patients with SMI and a detectable HCV viral load, HCV antiviral therapy was initiated in nine (19.6%). A relapse or an increase in substance use was common (77.8% or n=7), as was the requirement for adjustment or initiation of psychotropic medications (66.7% or n=6) during HCV antiviral therapy. Despite these barriers, rates of adherence to antiviral therapy were high and overall sustained virological response rates were comparable with published trials.

CONCLUSION: This study is the first to report HCV treatment outcomes in a population in which SMI and active polysubstance use was prevalent and suggests that with appropriate models of care, clients with trimorbidity can be treated safely and effectively.

Posted by Hepatitis C Research and News at 3:09 PM No comments:

OBJECTIVE: To assess the safety and efficacy of TVR plus PEG-IFN-α2a-ribavirin in patients with genotype 1 HCV and HIV-1 and evaluate pharmacokinetics of TVR and antiretrovirals during coadministration.

Posted by Hepatitis C Research and News at 3:05 PM No comments:

Detection of hepatocellular carcinoma at advanced stages among patients in the HALT-C trial: where did surveillance fail?

OBJECTIVES: Only 40% of patients with hepatocellular carcinoma (HCC) are diagnosed at an early stage, suggesting breakdowns in the surveillance process. The aim of our study was to assess the reasons behind surveillance process failures among patients in the Hepatitis C Antiviral Long-Term Treatment against Cirrhosis Trial (HALT-C), which prospectively collected HCC surveillance data on a large cohort of patients.

METHODS: Binary regression analysis was used to identify predictors of consistent surveillance, which was defined as having an ultrasound and alpha-fetoprotein every 12 months. Surveillance failures among patients who developed HCC were classified into one of three categories: absence of screening, absence of follow-up, or absence of detection.

CONCLUSIONS: Surveillance process failures, including absence of screening or follow-up, are common and potentially contribute to late-stage tumors in one-third of cases. However, the most common reason for finding HCC at a late stage was an absence of detection, suggesting better surveillance strategies are needed.

Posted by Hepatitis C Research and News at 3:02 PM No comments: