Companies may be holding back HCV cure 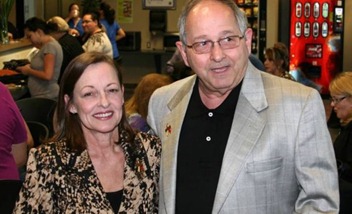 Hepatitis-C (HCV) is a virus that attacks the liver – it can be deadly and its effects (fatigue, nausea, weight loss, body aches) can be disabling. The disease can also behave like a silent killer, destroying a person’s liver over years without any symptoms. The Centers for Disease Control (CDC) recently issued a warning and recommends that everyone between the ages of 45 and 65 be tested -- potentially millions more could have the virus and not even know it. This story is about a cure for the disease -- a cure patients can’t get access to.

San Antonio.- Hepatitis-C (HCV) is a virus that attacks the liver – it can be deadly and its effects (fatigue, nausea, weight loss, body aches) can be disabling. The disease can also behave like a silent killer, destroying a person’s liver over years without any symptoms. The Centers for Disease Control (CDC) recently issued a warning and recommends that everyone between the ages of 45 and 65 be tested -- potentially millions more could have the virus and not even know it. This story is about a cure for the disease -- a cure patients can’t get access to.

The results of the all-oral combination are a huge advance, not only thanks to the remarkable results, but because they had mild side effects (think mild to moderate fatigue) that were well tolerated.

News of the cure moved the stock market and thrilled the medical world, which had been struggling with chemo-style therapies that were debilitating and not always effective.

In San Antonio, Margaret Dudley, who just missed entry to the successful study by a week, was overjoyed to learn a cure was found.

Almost exactly a year ago, Dudley went to see her doctor. She had been tired and just not feeling well for a couple of years and finally decided she needed a checkup. She learned she had HCV:type 3 and the treatment options were harsh with uncertain results. She has dropped more than 30 pounds since then – but she works hard not to let it hold her back.

And it’s a good thing Dudley is a fighter, because she decided to champion the millions of patients who won’t be getting the cure.

It turns out that BMS and GS have no plans to collaborate and move forward with phase 3 trials required to get the cure to market and the millions who desperately need the medication.

La Prensa contacted both companies by phone and by email. We asked both companies if they had plans to go forward with the phase 3 trials, but they would only comment they were trying to find the best options from all ongoing studies.

Cara Miller, spokesperson for Gilead Sciences, did not address the question and responded: “We are looking at the results from all of the ongoing studies to better understand what might be the best option or options for advancing as quickly as possible the best all-oral regimen.”

Bristol Myers-Squib at least acknowledged the existence of the phase II trials, but could not explain why the companies will not collaborate for the sake of the patients.

If the two companies do not collaborate, a new successful cocktail of drugs that works could take years – time many patients don’t have.

So Dudley, who likely picked up the virus at Permanent Cosmetics by John Shumate, explains she has “spent every waking moment since working on getting the word out.”

She founded the HCV Coalition for the Cure (hepc-cured.com) to lead the campaign to bring both companies to the table so they can move forward with their successful collaboration and get the cure for HCV to the market. Through the Coalition website, she manages a petition which has more than 7100 signatures.

“I hope people will be as outraged by this as we are and will take the time to visit the website and sign the petition. To think the cure everybody has been praying for is here, but not available because of corporate greed is shocking – why are they still chasing the cure when they’ve already found it?” Dudley said.

She also wants people to understand that HCV is not only spread by needles. It can happen when you share a razor, get a tattoo, permanent cosmetics or even a manicure when the utensils are not properly sanitized. Anybody can get HCV.

Just a few weeks ago, BMS halted another trial for an all-oral treatment for HCV using their Daclatasvir and a different drug because one patient died of heart failure and several others were hospitalized.

We contacted the Food and Drug Administration to ask if it was ethical to subject patients to potentially dangerous experimental treatments when an actual cure is available.

Stephenie Yao, a spokesperson for the FDA, responded, “We're not able to comment on this issue. Federal law prohibits our releasing information about any investigational new drug application.”

Dr. Robert Lanford of Texas Biomedical Research right here in San Antonio has been looking for the answer to HCV for 28 years.

“I’ve been working on the virus for 28 years – and we know we’re going to have a cure. There will be a whole series of cocktails because it may not be one size fits all,” he explained.

“It would be a good thing to allow 7977 and Daclatasvir to proceed to phase III at least temporarily … Gilead has a lot of good drugs to put into that cocktail but it’s still a question of time,” he said.

To learn more and to sign the petition, visit hepc-cured.com.

PHOTO: Founder of HCV Coalition for the Cure, Margaret Dudley accompanies her spouse, Gary Dudley, president and cofounder of SWBC, to the Alamo Colleges Open House earlier this week. Mrs. Dudley is working on getting out the news about a cure for HCV. Visit hepc-cured.com for more info. (Photo by Speedy Gonzalez)

Posted by Hepatitis C Research and News at 8:50 AM 1 comment: