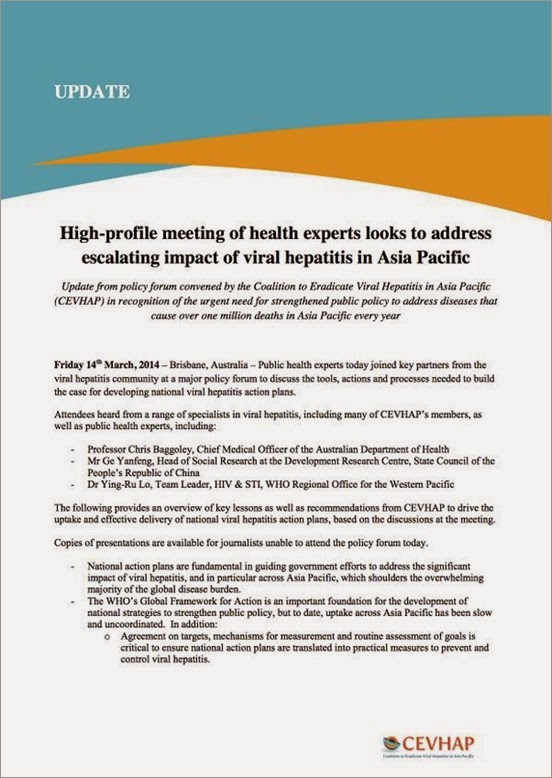 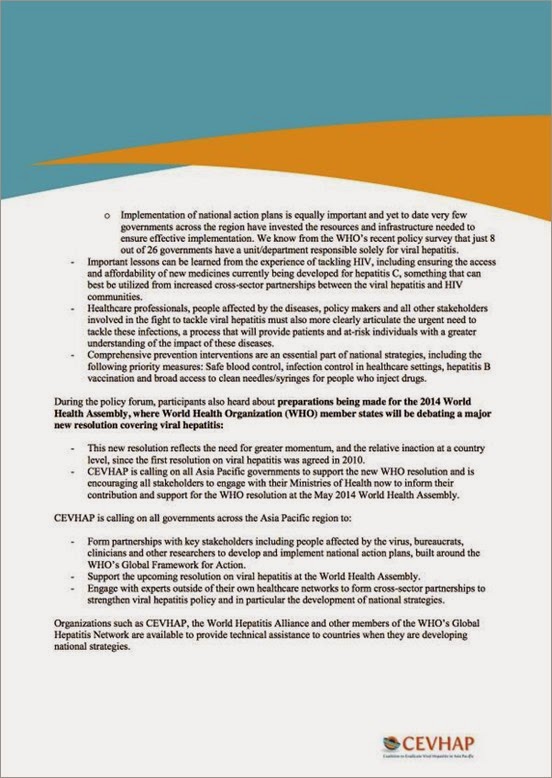 Posted by Hepatitis C Research and News at 5:07 PM No comments:

NEW YORK (Reuters Health) - In addition to their increased risk of death from hepatocellular carcinoma, chronic hepatitis C virus (HCV)-infected patients also have a higher mortality rate from non-Hodgkin lymphoma and pancreatic, rectal, and oral and pharyngeal cancers, according to a new study.

The findings were presented February 20 at the annual meeting of the American College of Preventive Medicine in New Orleans, Louisiana.

Cancer-related mortality was analyzed for 12,126 chronic HCV-infected patients in the Centers for Disease Control and Prevention's (CDC) Chronic Hepatitis Cohort Study and compared to Multiple Cause-of-Death mortality data for 2006 to 2010 from the National Center for Health Statistics after age adjustment.

As expected, the risk of dying from liver cancer was elevated among HCV-infected patients - nearly 30 times higher than among non-infected individuals.

Study author Dr. Robert D. Allison from Johns Hopkins Bloomberg School of Public Health in Baltimore, Maryland, said it is important to point out that "chronic hepatitis C infection is a known risk factor for developing non-Hodgkin lymphoma (NHL). But to our knowledge, this is the first U.S. study to investigate and show that persons with chronic hepatitis C have a higher risk of death from NHL."

He said there are multiple possible explanations for the other cancers. "The HCV group had a higher rate of smoking and alcohol use than the general population. So, it's hard to say for sure if the increased risk of death from the three smoking-related cancers (oral, pancreatic, and rectal) was related to HCV infection. However, NHL is not associated with either smoking or alcohol use."

Dr. Allison told Reuters in an email, "We also analyzed the average age of death. We found that persons with chronic hepatitis C died an average of 12 years earlier than the general population from 12 different cancers - i.e., bladder, breast, colon, esophagus, leukemia, liver, lung, non-Hodgkin lymphoma, oral, pancreatic, prostate, and rectal cancers. This was an unexpected and concerning finding that may have HCV treatment and cancer screening implications."

Dr. T. Jake Liang, chief of liver diseases and deputy director for translational research at the National Institute of Diabetes and Digestive and Kidney Diseases in Bethesda, Maryland, was not involved in the new research. He told Reuters Health, "These findings are significant in the sense that chronic HCV infection may predispose an infected person to cancer of organ systems other than the liver, where the virus infects."

Dr. Allison added, "Baby boomers make up 70% of the hepatitis C infected population in the U.S. (77% in our study). The CDC and the U.S. Preventive Services Task Force recommend that all these individuals - i.e., persons born between 1945 and 1965 - get tested."

Posted by Hepatitis C Research and News at 4:34 PM 1 comment:

Histopathological scoring of liver fibrosis mainly measures architectural abnormalities and requires a minimum biopsy size (greater than or equal to 10mm). Liver collagen quantification may allow use of small size biopsies and improve the prediction of clinical outcomes. This study evaluated the ability of the collagen proportional area (CPA) measurement to predict clinical outcomes.

Posted by Hepatitis C Research and News at 4:19 PM No comments:

Prospective evaluation of Fibrotest®, Fibrometer® and Hepascore® for staging liver fibrosis in chronic hepatitis B: Comparison with hepatitis C

Fibrosis blood tests have been validated in chronic hepatitis C. Their diagnostic accuracy is less documented in hepatitis B. The aim of this study was to describe the diagnostic performance of Fibrotest®, Fibrometer® and Hepascore® for liver fibrosis in hepatitis B compared to hepatitis C.

510 patients mono-infected with hepatitis B or C and matched on fibrosis stage were included. Blood tests were performed the day of the liver biopsy. Histological lesions were staged according to METAVIR.

Overall the diagnostic performance of blood tests is similar in hepatitis B and C. The risk of underestimating significant fibrosis and cirrhosis is however greater in hepatitis B and cannot be entirely corrected by the use of more stringent cut-offs.

Posted by Hepatitis C Research and News at 4:04 PM No comments: 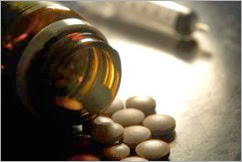 Public health experts say effective new drugs to treat hepatitis C should be subsidised in Australia to avert a looming strain on the national health system.

Australians who contracted hepatitis C decades ago are only now starting to develop terminal liver disease at an alarming rate.

More than half of Australia's 250,000 hepatitis C sufferers are baby boomers who contracted the virus back in the 1960s and 1970s, when experimental drug taking was rampant.

Most of these patients have, until now, remained in good health, but after 30 or more years living with the virus, the number getting liver cancer or waiting for liver transplants is now dramatically on the rise - leaping from 10 per cent to 40 per cent in the past five years.

It is a trend which could put pressure on healthcare resources.

Until recently, treatments have had such a low success rates and brutal side effects, even doctors have advised patients to wait for a better treatment to come along, hopefully before liver failure claims them first.

Public health researcher Jack Wallace is one of those with hepatitis C who has not treated the disease, hoping they are not among the one in three who will die of liver failure.

"I've been putting off treatment for the last 20 years because the current treatments, the side effects of them are too hard for me to contemplate actually doing treatment," he said.

However, one of Australia's leading hepatologists, Professor Geoff McCaughan, says a new "revolutionary" treatment is being rolled out in the United States and Europe.

"We are talking about 95 per cent cure rates with one or two tablets a day, essentially without any side effect," he said.

The drugs have arrived at a time when the first generation of hepatitis C sufferers in Australia - the baby boomers - are starting to succumb to liver failure.

"Liver cancer associated with hepatitis C is the most rapidly growing cancer in the Western world," Professor McCaughan said.

Professor McCaughan and his colleagues are lobbying hard to have the new therapy subsidised in Australia, starting with the most vulnerable patients.

"If you walk in the door with chronic hepatitis C infection, academically and medically you should be able to get these medications at some stage within the next one to three to five years," he said.

Hepatitis C is also such a stigmatised disease there are no high-profile lobby groups and sufferers themselves tend to keep their condition a secret.

Mr Wallace says such is the lack of understanding of the disease, few Australians even realise most people with the virus are middle class citizens.

"Once you disclose you've got hepatitis C, you are publicly disclosing the fact that you've injected drugs, and injecting drugs in Australia is a shameful thing to admit," he said.

"It's really interesting - it's been 30 years since I last injected drugs, and most of the people that I interact with on a daily basis would have absolutely no idea of my history."

Posted by Hepatitis C Research and News at 3:51 PM No comments:

Provided by The Boston Globe

The suits escalate a three-month-old legal battle between Gilead and Idenix over the drug, called Sovaldi. Idenix — in which a Boston hedge fund has taken a growing position — says it has exclusive rights to intellectual property for sofosbuvir, the compound on which Sovaldi is based. The company lodged similar complaints against Gilead in California in December.

Idenix has not specified how much it is seeking in damages. Its suits in Europe follow the granting of a patent by the European Union on Wednesday. The patents that are the subject of the US infringement cases were granted between 2005 and 2009.

“These are the first offensive moves Idenix has taken in this landscape of litigation against Gilead,” said Teri Dahlman, an Idenix spokeswoman. “We feel strongly about our intellectual property and we’re defending it.”

“Gilead will defend against any claim brought by Idenix and we will challenge the validity of Idenix’s European patent,” she said.

Patients carrying the liver-ravaging hepatitis C virus have been gravitating to Sovaldi, approved by the Food and Drug Administration in December, because it is a pill that is easier to tolerate, can be taken for a shorter span than other treatments, and is considered more effective than previous drugs. The wholesale price of Gilead’s drug is $28,000 for a four-week treatment.

Analysts have projected Sovaldi could generate sales of at least $6 billion this year, which would make it one of the top-selling drugs of all time. Vertex Pharmaceuticals Inc., the Boston biotechnology company that markets rival hepatitis C drug Incivek, has lost business to Sovaldi and other new-generation treatments for the disease.

Idenix, founded in 1998, co-developed a hepatitis B treatment currently marketed exclusively by Novartis AG, the Swiss pharmaceutical company that has its worldwide research and development headquarters in Cambridge. Idenix has two hepatitis C drug candidates in clinical trials, and several others in preclinical development, drawing on intellectual property it has under patents awarded in the United States and Europe.

Posted by Hepatitis C Research and News at 3:25 PM No comments: