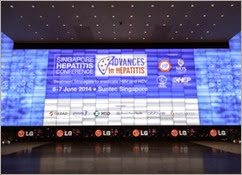 How should decisions about the cost effectiveness of hepatitis C treatments be made? Rebecca Tan finds out what the experts think at the inaugural Singapore Hepatitis Conference held at Suntec Singapore Convention and Exhibition Center from 6-7 June 2014.

AsianScientist (Jun 17, 2014) – When drug manufacturer Gilead announced that its new hepatitis C drug, Solvaldi® (generic name, sofosbuvir) had been approved by the United States Food and Drug Administration, the news was met with both relief and outcry. A simple, once-a-day oral pill compatible with existing therapies and able to treat hepatitis in 90 percent of patients, Solvaldi® is a highly desirable drug that could make a significant difference to the 200 million patients chronically infected with the hepatitis C virus (HCV) around the world. However, many have questioned the price tag of US$84,000 for a standard 12-week course of treatment, which works out to a staggering US$1,000 per pill. From the point of view of the individual patient and governmental health agencies, is Solvaldi® worth it?

As it turns out, the answer to this question is not straightfoward, as Asian Scientist Magazine found out from a panel of experts at the Singapore Hepatitis Conference 2014, held at Suntec Singapore Convention and Exhibition Center from 6-7th June. The pressing issue of the cost effectiveness of HCV therapies was discussed in the session titled Issues in HCV eradication in Asia, chaired by Rajender Reddy, professor at the University of Pennsylvania and director of the Viral Hepatitis Center in the US, and Qin Ning, director of the Institute of Infectious Disease at Tongji Hospital in China.

Peculiarities of the disease

The decision whether or how to treat HCV infection is strongly influenced by features unique to the disease itself. First of all, it is estimated that up to 90 percent of HCV carriers are asymptomatic. This means that carriers go untreated for many years, and only come to know of the underlying HCV infection when they show up at the clinic with liver cirrhosis or end-stage liver cancer. Therefore, doctors have to decide between treating patients with expensive drugs in the absence of symptoms, meaning that some cost would be wasted on individuals who would not have gone on to develop debilitating disease; or waiting until the disease begins to worsen and only treating those patients.

The situation is made more complex by the fact that the cost effectiveness of HCV treatments is also influenced by variables such as life expectancy and the use of transplants to treat liver disease, factors which differ widely across Asia-Pacific.

“One of the more surprising things we found was that a country’s life expectancy decides whether or not HCV treatment is cost effective,” said Dr. Dan Yock Young, head of the Department of Gastroenterology and Hepatology at the National University Health Systems.

“If you have a life expectancy of less than 65 years, you don’t need to treat for HCV. This is because the burden of disease occurs later in life; chronic HCV patients typically manifest symptoms only after the age of 65. In countries with low life expectancy, the chances of dying from violence or diseases such as cholera are much higher. In other words, doctors can cure HCV with drugs, but it would make no difference to survival,” said Dr. Dan. 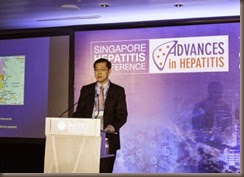 However, in countries like Taiwan where the rate of liver transplants is high, treating the disease earlier with drugs is actually more cost effective as the alternative of transplantation surgery and lifelong immunosuppressants is relatively more expensive.

“With less cirrhosis, less liver cancer and less transplants, more expensive drugs can be more cost effective in the long run,” Dr. Dan said. “Furthermore, if you don’t treat, or start with cheaper drugs, there is the added cost of re-treatment at a later stage.”

On a positive note, a polymorphism in the IL-28B gene common in the Asian population favors the clearance of HCV, leading to a high sustained virologic response (SVR), which is the absence of HCV RNA in the blood of patients at least 24 weeks after discontinuing treatment. According to the panelists, this makes it more cost effective to treat patients in an Asian population as they respond better to directly acting antivirals (DAAs), often the first line of treatment for HCV.

Naturally, price and purchasing power are major determinants of cost effectiveness as well. However, gross domestic product (GDP) per capita and standards of healthcare vary widely across Asia. Political pressure can bring down the price of HCV drugs, as seen in the successful lobbying for generic versions of the drug Viread in India, China and Thailand which do not observe the patent in force in other countries. While this may benefit developing countries in the short run, it has been argued that it could ultimately hurt drug discovery in the long run as research on new drugs are disincentivized, the panel noted.

Another way that drugs can be made more affordable is through government subvention or subsidies. Whether governments subsidize the treatments or people pay with private insurance, the net cost to society is the same. However, subventions can influence the take up rate, and may help lower the burden of disease.

The devil, of course, is in the details: how much should governments subsidize and for which drugs? Hepatitis is a complex disease with many different genotypes and patient subpopulations. For example, patients with HCV genotype 1 are less responsive to the standard pegylated interferon treatment and require an additional antiviral drug called Ribavarin. Newer drugs such as Solvaldi can be used without interferon treatment, but are much more expensive.

“Two percent of the world’s population is infected with HCV. One of the biggest ironies is that 90 percent of those patients are outside the US and Europe, but access to care mainly occurs within US and Europe and the drugs that are being developed cater to that market,” said Dr. Shamir Shah, director of Global Hospitals in Mumbai, India.

Another barrier preventing patients in Asia from accessing newly developed hepatitis drugs are stringent regulatory requirements. Many countries in Asia require clinical trials to be done in their own populations before the drug can be approved. Therefore, it may take years for drugs already in the market in the US and Europe to reach Asia. Participants at the discussion suggested that this might be expedited by collaborations with Asian universities and research institutions, or multi-center trials where some of the trials are done in Asia.

In the meantime, Gilead has made statements indicating that it might retail Solvaldi® in India at 42 times less than the US price, or US$2,000 for a full course of treatment. However, whether or not a significant drop in price is sufficient to make treatment cost effective also depends on many other factors. As the discussion showed, the price of the treatment ultimately needs to be weighed against the burden of the disease to make an accurate assessment of cost effectiveness.