Eradication of hepatitis C infection: The importance of targeting people who inject drugs

You have full text access to this OnlineOpen article

Copyright © 2013 The Authors. HEPATOLOGYpublished by Wiley on behalf of the American Association for the Study of Liver Diseases.

This is an open access article under the terms of the Creative Commons Attribution-NonCommercial License, which permits use, distribution and reproduction in any medium, provided the original work is properly cited and is not used for commercial purposes.

Hepatitis C virus (HCV) affects ∼170 million people worldwide and causes significant morbidity and mortality.[1] In high-income countries, people who inject drugs (PWID) are at greatest risk of HCV infection.[2] Until recently HCV eradication seemed unlikely, but recent advances in HCV treatment and improved understanding of the effectiveness of harm-reduction intervention effectiveness give reason for optimism. Current HCV treatments can cure ∼75% of patients and new drugs will further improve effectiveness (over 90% cure) and improve tolerability.[3] If HCV treatment can be delivered effectively to those at highest risk of onward transmission, significant reductions in future HCV cases are possible. The feasibility of disease eradication must be assessed on both scientific criteria (e.g., epidemiological susceptibility, effective and practical intervention available, and demonstrated feasibility of elimination) and political criteria (e.g., burden of disease, cost of intervention).[4] With effective, curative treatment now available, HCV meets these criteria.

To achieve eradication, public health efforts must focus on PWID, the key drivers of HCV transmission. A sustained, multipronged approach could substantially reduce HCV infection in PWID over the next 10-20 years through a focus on HCV treatment as prevention, meaning improved access to more effective and well-tolerated HCV treatment. Other major elements include increasing coverage of opiate substitution therapy (OST), needle and syringe programs (NSPs), and regular HCV screening and counseling.

PWID are highly marginalized, so effective engagement and inclusion in strategy development are critical to HCV eradication. To date, health services have been unsuccessful in channeling PWID into HCV treatment, despite evidence of willingness to be treated[5] and treatment success.[6]

For the past decade HCV treatment has mostly involved pegylated interferon and ribavirin (PEG/RBV); however, trials of direct-acting antivirals (DAAs) show increased rates of cure, improved tolerability, and reduced duration of treatment.[3, 7, 8] The first NS3 protease inhibitors, boceprevir and telaprevir, used in combination with PEG/RBV, have already improved outcomes, with up to 75% of patients chronically infected with HCV genotype-1 being cured.[3] Emerging therapies that include next-generation NS3 protease inhibitors, NS5A inhibitors, and NS5B polymerase inhibitors show great promise.[7, 8] An interferon-free 12-week DAA regimen with single daily dosing and over 90% cure is a real possibility.[3]

Highly effective and tolerable HCV therapies will make treatment as prevention feasible. This strategy will require targeting PWID, few of whom undergo HCV treatment despite increasing evidence of success.[6] The rarity of PWID undergoing treatment relates to concerns about interferon toxicity and RBV teratogenicity and unsubstantiated concerns about PWID compliance and high reinfection rates. Apart from managing adverse side effects, we know little about interventions that improve HCV treatment compliance.[9] However, increasing evidence shows that PWID are compliant when treated with PEG/RBV,[10] and compliance can only rise with improved treatment tolerability. Similarly, most evidence suggests HCV reinfection following treatment remains low.[11]

Models developed by Martin et al.[12] suggest that treating a relatively small proportion of PWID could significantly reduce HCV prevalence over 15 years, with the impact varying depending on the number treated, the background HCV prevalence, treatment efficacy, and the speed of treatment scale-up (Fig. 1). Estimated HCV prevalence halved when treatment was scaled up to 15, 40, or 76 per 1,000 PWID annually in Edinburgh (Scotland), Melbourne (Australia), and Vancouver (Canada), respectively, using DAAs. Current estimated HCV prevalence in PWID in those three jurisdictions is 25%, 50%, and 65%, respectively. Recent modeling of PWID in Vietnam also revealed treatment impact on HCV prevalence.[13] 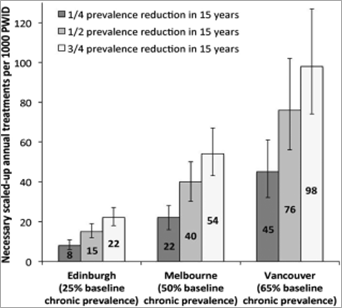 Figure 1. Annual scaled-up treatment rate required to reduce prevalence by 1/4, 1/2, or 3/4 in Edinburgh, Melbourne, and Vancouver within 15 years (by 2027). Bars (and numbers) indicate the mean value, with whiskers representing the 95% credibility interval.

Prevention of HCV transmission is critically important for HCV eradication. Harm-reduction strategies for PWID, notably OST and NSPs, have been partially effective in reducing HCV transmission in PWID,[14] although poor coverage has limited their impact.[15] A recent study estimated that NSPs directly averted 97,000 (∼50%) new HCV infections in Australia during 2000-2009.[14] Modeling by Vickerman et al.[16] suggests that, in a setting where HCV prevalence is 40%, scaling OST/NSP coverage up from 0% to 20%, 40%, and 60% can reduce HCV prevalence over 10 years by 13%, 24%, and 33%, respectively. However, further increments in coverage produce only marginal improvements,[16] suggesting that complementary strategies are required to substantially reduce HCV prevalence.

Current HCV treatment is expensive and the cost of scale-up with more expensive therapies will be considerable. Visconti et al.'s[19]modeling found that treating both current and former PWID for HCV using standard PEG/RBV was cost-effective. Martin et al.'s[20] model included the broader public health benefit of reducing HCV prevalence, and showed antiviral treatment for PWID saved £521 and £2,539 per quality-adjusted life year (QALY) when baseline HCV prevalence was 20% and 40%, respectively, compared with no treatment, well below generally accepted thresholds for cost-effective interventions. Despite the cost-effectiveness of treating PWID, the actual costs of HCV treatment, particularly DAAs, will challenge governments in both developed and resource-limited settings; nonetheless, the models suggest standard HCV therapy still has considerable benefits.

Candidate vaccines designed to prevent initial infection, reduce viral persistence in acute infection, or lead to sustained virological response (SVR) in chronic infection are in phase 2 and 3 trials.[22] However, experience with the highly effective hepatitis B vaccine suggests uptake among PWID may be low.[23] Hence, an HCV vaccine will be just one component of an HCV eradication strategy.

In conclusion, eradicating HCV in PWID is ambitious but, based on the criteria for assessing disease eradicability,[4] achievable (Table 1). Treatment costs will be substantial and recruiting sufficient PWID to treatment programs challenging. However, scale-up of HCV diagnosis and treatment with new highly efficacious and tolerable drugs, plus effective and relatively inexpensive harm reduction and prevention approaches, will considerably reduce HCV prevalence. Eradicating HCV needs a sustained, focused and multipronged approach; the time to start is now. 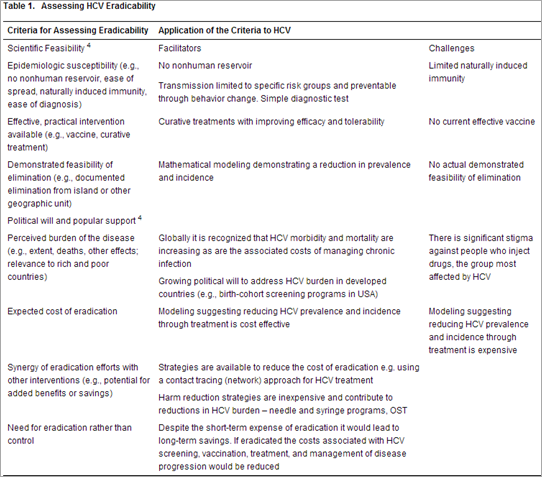 Posted by Hepatitis C Research and News at 4:06 PM