We need to talk about hepatitis C 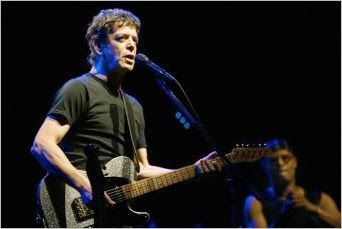 The death of musician Lou Reed from liver cancer may raise awareness of the challenges of living with hepatitis C, but more work needs to be done to make sure treatments are widely available, writes Professor Gregory Dore.

In a moving, intimate tribute to Lou Reed in the current issue of Rolling Stone, his partner Laurie Anderson writes with gratitude and love of their shared joys of artistic endeavour, their embrace of life and learning and of Reed's power and grace, even in the face of death.

She also writes, in an awareness-raising matter-of-fact manner, of the challenges of living with hepatitis C, the chronic liver disease that led to his liver cancer, a liver transplant, and ultimately his death from complications.

He was sick for the last couple of years, first from treatments of interferon, a vile but sometimes effective series of injections that treats hepatitis C and comes with lots of nasty side effects.

Last spring, at the last minute, he received a liver transplant, which seemed to work perfectly, and he almost instantly regained his health and energy. Then that, too, began to fail, and there was no way out.

One of the greatest challenges faced by people living with hepatitis C, their partners and families, is discussing the illness openly.

Although, Reed, a founding member of The Velvet Underground, did not shy away from his own personal history, the stigma associated with the alignment of hepatitis C infection and injecting drug use is so profound that people often hide their status, even from their family and friends.

For most people with hepatitis C there is no fame or fortune to dilute fears of being harshly judged.

Consequently, even in consultations with health care professionals many people with hepatitis C are reluctant to acknowledge past injecting drug use, often due to their previous experiences of discrimination.

Such stigma and discrimination are major barriers to advancing the public health response to hepatitis C at both the individual and population levels.

The mobilisation of advocacy to address the rising burden of infection and deaths from HIV in the 1980s was supported by the effective community-based endeavours of the gay rights movement of the 1970s.

In contrast, former or current injecting drug users are generally reluctant to identify with this part of their lives, despite often having strong social networks related to such shared experiences.

Change, however, is imminent. Within the next few years, the treatment of hepatitis C should be transformed from the relatively prolonged (6 to 12 months), arduous, and often ineffective interferon-based injectable therapy that Reed endured, to an oral once daily "direct-acting antiviral" therapy with limited side effects.

Even more remarkably, based on preliminary clinical trials, the cure rate with these new hepatitis C regimens should be greater than 90 per cent, with treatment only required every three months.

But, to enable people living with hepatitis C to benefit from what could be one of the great clinical advances in recent decades, treatment programs must be within reach.

This means challenging stigma and discrimination now and raising community awareness to support people with hepatitis C to seek treatment, as well as making sure that treatment is widely available.

I have had the opportunity to care for people with hepatitis C in hospitals, methadone clinics and community-based clinics; such diverse care environments reflect the great diversity of those living with the illness.

The Perfect Day that we are striving for in hepatitis C would be one in which the 230,000 people living with chronic hepatitis C in Australia have the opportunity to fully benefit from approaching advances in treatment and care.

Professor Gregory Dore is head of the Viral Hepatitis Clinical Research program at the University of New South Wales's Kirby Institute for infection and immunity in society. View his full profile here.

Posted by Hepatitis C Research and News at 6:01 PM