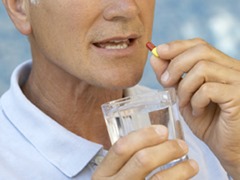 Reviewed by F. Perry Wilson, MD, MSCE; Instructor of Medicine, Perelman School of Medicine at the University of Pennsylvania

Two investigational drugs for hepatitis C (HCV), both taken orally, combined effectively in difficult-to-treat patients without the use of pegylated interferon, researchers reported.

The drugs -- faldaprevir and deleobuvir (plus ribavirin) -- led to undetectable HCV 12 weeks after the end of treatment in 52% to 69% of patients, without the need for interferon, according to Stefan Zeuzem, MD, of the Johann Wolfgang Goethe University Medical Center in Frankfurt, Germany, and colleagues.

But efficacy was lower when investigators omitted the standard HCV drug ribavirin from the mix, Zeuzem and colleagues reported in the Aug. 15 issue of theNew England Journal of Medicine.

The current standard of care for the hard-to-treat genotype 1 of HCV is interferon and ribavirin, in combination with one of the protease inhibitors telaprevir (Incivek) and boceprevir (Victrelis).

Faldaprevir is a protease inhibitor in the same class as telaprevir and boceprevir and has been found effective with interferon and ribavirin, with fewer side effects than the older drugs.

But researchers are trying hard to get rid of interferon, which is difficult to take and often leads to treatment discontinuation, so that it is unlikely faldaprevir will be used in that context.

Instead, investigators are testing it in combination with other so-called direct-acting agents that target the HCV itself, rather than boosting the immune system as interferon does.

The findings reported by Zeuzem and colleagues are "encouraging" and show that "more effective treatment with shorter duration and improved side effect profile" is on the horizon, commented Gyongyi Szabo, MD, PhD, of the University of Massachusetts Medical School in Worcester, Mass.

The study is the first large-scale trial to show "excellent therapeutic benefit of an interferon-free, all oral treatment regimen in genotype 1 chronic HCV infection," Szabo told MedPage Today by email.

In the current study, dubbed SOUND-C2, faldaprevir was coupled with deleobuvir, a non-nucleoside polymerase inhibitor, and tested in various combinations in 362 treatment-naive patients with genotype 1 infection.</P

They were randomly assigned to one of five study arms:

The primary endpoint of the study was the proportion of patients in each arm who had undetectable HCV 12 weeks after the end of therapy (SVR12).

But the study design also allowed Zeuzem and colleagues to determine if the dosage of deleobuvir, the duration of treatment, or the presence or absence of ribavirin had an impact on outcomes.

They also stratified patients by subgenotype 00 1a or 1b -- and by polymorphisms in the IL28B gene, which predicts response to treatment with interferon and ribavirin.

The investigators found that 59% of patients in the 16-week group met the primary endpoint, as did 59% of those who got the same dosing for 28 weeks and 52% who got it for 40 weeks.

Also, 69% of patients who underwent 28 weeks of therapy but with twice-daily deleobuvir had an SVR12.

On the other hand, just 39% of those who were treated without ribavirin reached an SVR12.

Deleobuvir dosing and treatment duration did not significantly affect treatment outcomes, Zeuzem and colleagues reported, but the response rate when ribavirin was left out of the mix was significantly lower (P=0.03).

Also, patients with the IL28B CC polymorphism had SVR12 rates of 58% to 84%, compared with 33% to 64% among those with either CT or TT genotypes, Zeuzem and colleagues reported.

Adverse events were common, they reported, with 340 patients reporting at least one, 34 reporting a serious event, and 27 having an event that was life-threatening. Rash, photosensitivity, nausea, vomiting, and diarrhea were the most common adverse events.

Zeuzem and colleagues cautioned that the open-label design might have introduced a bias against the longer periods of therapy, since patients in those arms might have been more prone to early discontinuation.

They also cautioned that the lack of an interferon control group "limits the interpretation of the results in relation to the current standard-of-care treatment."

Szabo added that the response rate of at best 69% "is still far from a 100% desirable goal."

And, she told MedPage Today, patients in the study were Caucasian, which limits the applicability of the findings to other ethnic groups. African Americans with HCV, in particular, are known to be more difficult to treat.

In June, the U.S. Preventive Services Task Force recommended that all baby boomers be offered an HCV test, agreeing with the CDC, which in May 2012 urged one-time screening for all people born between 1945 and 1965, a population believed to account for 75% of hepatitis C infections in the U.S. HCV is the most common chronic blood-borne pathogen in the U.S. and a leading cause of complications from chronic liver disease.

The study was sponsored, designed, and conducted by Boehringer Ingelheim in collaboration with the academic investigators. The sponsor monitored the study, collected data, and performed the statistical analysis. Zeuzem reported financial links with the company, as well as with Abbott, AstraZeneca, Achillion, Bristol-Myers Squibb, Gilead, Novartis, Merck, Idenix, Janssen, Roche, Vertex, Presidio, Santaris, and ITherX. Some co-authors are employed by Boehringer Ingelheim.

Posted by Hepatitis C Research and News at 8:22 AM