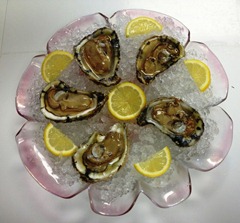 Results of a recent study by Texas A&M University System personnel and others on the effects of electron beam irradiation on viruses in raw oysters will be published in the June issue of the Applied and Environmental Microbiology journal. (U.S. Department of Agriculture — Agricultural Research Service photo by David Kingsley)

Research to be published in June issue of leading microbiology journal

COLLEGE STATION – According to the Centers for Disease Control, about one in six Americans gets food poisoning each year. Additionally, virus infection risks from consumption of raw oysters in the U.S. are estimated to cost around $200 million a year.

To address the issue of health risk from eating raw oysters, Texas A&M University graduate student Chandni Praveen, along with Texas A&M AgriLife Research scientist Dr. Suresh Pillai and a team of researchers from other agencies and institutions, studied how electron-beam pasteurization of raw oysters may reduce the possibility of food poisoning through virus.

Other entities involved in the study included the U.S. Department of Agriculture, the U.S. Food and Drug Administration and University of Texas School of Public Health-El Paso regional campus.

The results of this study will be published in the June issue of the leading microbiology journal, Applied and Environmental Microbiology.

“The study was performed using a human norovirus surrogate called murine norovirus (NoV), and a hepatitis A (HAV) virus along with advanced quantitative microbial risk assessment tools,” explained Pillai, professor of microbiology and director of the National Center for Electron Beam Research at Texas A&M University. “A salient feature of e-beam pasteurization technology is that it uses commercial electricity to generate the ionizing radiation that inactivates the viruses. It is a green technology because no chemicals are involved.”

Pillai said the FDA already has approved the use of electron beam technology as a pathogen intervention strategy to control the naturally occurring Vibrio vulnificus bacterial pathogen in shellfish.

According to the FDA, raw oysters contaminated with Vibrio vulnificus can be life threatening or even fatal when eaten by someone with liver disease, diabetes or a weakened immune system.

“We’re all for any means of technology that enhances the safety of our product,” said Sal Sunseri, co-owner of P&J Oysters and a representative of the Louisiana Oyster Dealers and Growers Association. “While we provide a safe product, we know there are at-risk groups, and that processing methods like freezing, high-pressure treatment and electron-beam irradiation reduce or eliminate the risk for those groups and enhance the overall safety of our product.”

At this time, however, electron-beam technology is not being used for commercial oysters sold in the U.S.

“For the study, we chose the norovirus and hepatitis A virus, as these are pathogenic threats to those consuming shellfish, and chose oysters as they are a type of mollusk that’s more commonly eaten raw,” said Praveen, a doctoral candidate in the toxicology program of the Food Safety and Environmental Microbiology Laboratory at Texas A&M.

Praveen said she and the other researchers also chose the viral pathogens as opposed to bacterial as they were more difficult to treat and also require a host species.

“Bivalves such as oysters are also filter feeders that obtain their food by pumping water through their system and filtering small organisms,” she said. “This can lead to the possible accumulation of NoV and HAV viral pathogens, as well as bacterial pathogens.”

“This is the first study that has attempted to quantify the reduction in infection risks of raw oysters contaminated with different levels of virus when pasteurized at FDA-approved doses,” he said.

Pillai said that the study showed if a serving size of 12 raw oysters were contaminated with approximately 100 hepatitis A and human noroviruses, an e-beam dose of 5 kGy (kilograys) would achieve a 91 percent reduction of hepatitis A infection risks and a 26 percent reduction of norovirus infection risks. A kilogray is a unit of absorbed energy from ionizing radiation.

Pillai said the study showed that if electron-beam pasteurization technology was included as part of a comprehensive food safety plan to reduce illnesses from raw oysters, significant public health benefits and, by extension, significant savings in medical and related expenses due to foodborne illness, can occur.

The study can be found in the June issue of Applied and Environmental Microbiology or online at the American Society of Microbiology website, http://aem.asm.org.

Posted by Hepatitis C Research and News at 4:02 PM