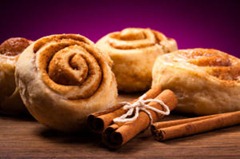 "True," or Ceylon, cinnamon is expensive, so most breads, sticky buns and other products in the United States use dried cassia bark, or cassia cinnamon. (Credit: © Jacek Chabraszewski / Fotolia)

May 8, 2013 — Many kinds of cinnamon, cinnamon-flavored foods, beverages and food supplements in the United States use a form of the spice that contains high levels of a natural substance that may cause liver damage in some sensitive people, scientists are reporting. Their study, published in ACS' Journal of Agricultural and Food Chemistry, found similar results as those published in the European Union.

Ikhlas Khan and colleagues explain that cinnamon, which comes from the bark of certain trees, is one of the most important flavoring agents used in foods and beverages. "True," or Ceylon, cinnamon is expensive, so most breads, sticky buns and other products in the United States use dried cassia bark, or cassia cinnamon.

Ceylon cinnamon contains very little coumarin, a naturally occurring substance that has been linked to liver damage in people sensitive to the substance. However, cassia cinnamon can contain larger amounts. Khan's team decided to check on the coumarin content of a wide variety of food products.

"As found in this study, coumarin was present, sometimes in substantial amounts, in cinnamon-based food supplements and cinnamon-flavored foods," they say.

The above story is reprinted from materials provided by American Chemical Society.

Posted by Hepatitis C Research and News at 10:17 PM