Race For Next Hepatitis C Drug Gets Tighter 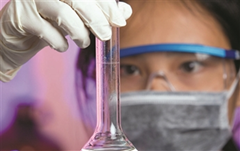 A Bristol-Myers Squibb scientist conducts lab research. The company halted its phase-two study of a hepatitis C drug after a patient death.

The race for the next blockbuster hepatitis C drug is still at full speed, but the field is thinning out.

Last month, Bristol-Myers Squibb (BMY) officially pulled the plug on its candidate, BMS-986094, after it had to halt a phase-two study after the death of one of its subjects from heart failure. The Food and Drug Administration was so concerned about this development that it also put a hold on two similar drugs by Idenix (IDIX), punishing that biotech's already low-priced stock.

Bristol-Myers said it will take a $1.8 billion charge to end the study, which resulted not only in the one death but in the hospitalization of eight other people. "While the cause of these unexpected events, which involve heart and kidney toxicity, has not been definitively established, the company has determined that it is in the best interest of patients to halt development of BMS-986094," the company said.

Yet, the Centers for Disease Control at about the same time affirmed that the potential market for such a drug is huge. On Aug. 16, the CDC released new guidelines urging everyone born between 1945 and 1965 — baby boomers — should be tested for HCV, the hepatitis C virus. Previously it had only recommended testing for people who've injected illegal drugs or who received blood or organ donations before these things were properly screened. But the new report noted the "limited effectiveness" of this approach, and concluded that everyone from that generation notorious for its drug use and sexual activity is at sufficient risk for a test.

"With an HCV antibody prevalence of 3.25%, persons born during 1945—1965 account for approximately three-fourths of all chronic HCV infections among adults in the United States," the report said.

The CDC estimated that 2.7 million to 3.9 million Americans are living with HCV, though many don't realize it because the virus can germinate without causing symptoms for years. If left untreated, though, it can end up causing fatal liver damage.

Current treatment relies on pegylated interferon, which leaves much to be desired, so in the past year massive amounts of money have gone into creating better alternatives. Bristol's ill-fated drug came with its $2.5 billion buyout of Inhibitex in February, amid a rush by drugmakers to acquire hot HCV candidates. Not long before, Roche (RHHBY) shelled out $230 million for Anadys, and, in the most jaw-dropping development, Gilead Sciences (GILD) paid nearly $11 billion for Pharmasset.

Posted by Hepatitis C Research and News at 11:07 AM