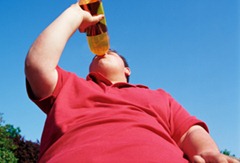 In obese patients with diabetes, a high intake of fructose – a sugar widely used in soft drinks and other foods – is associated with impairment in cellular energy balance that may play a role in liver disease, researchers said.

A small pilot study also suggested that elevated uric acid levels in response to a fructose challenge might be a marker for energy depletion, according to Manal Abdelmalek, MD, of Duke University Medical Center, and colleagues.

The findings suggest that energy depletion in the liver might be a factor in the development and progression of nonalcoholic fatty liver disease (NAFLD), Abdelmalek and colleagues reported in the Sept. issue of Hepatology.

Increasing rates of NAFLD in the U.S. parallel those of type 2 diabetes and obesity, the researchers noted, while at the same time fructose consumption has more than doubled in the past 30 years.

The main player in that latter increase, Abdelmalek and colleagues wrote, is the use of high-fructose corn syrup -- a mixture of glucose and fructose -- to sweeten such foods as bread, cereal, and soft drinks.

"Given the concurrent rise in fructose consumption and metabolic diseases," Abdelmalek said in a statement, "we need to fully understand the impact of a high-fructose diet on liver function and liver disease."

There's also evidence linking fructose-sweetened beverages with the development of diabetes, so it's "plausible that habitual and/or excessive fructose consumption" might increase the risk of NAFLD and also exacerbate liver injury and promote fibrosis progression, the researchers wrote.

To investigate, they looked at the 244 participants in the Action for Health in Diabetes Fatty Liver Ancillary Study, where they have estimated dietary fructose consumption and measured both hepatic adenosine triphosphate (ATP) -- a compound involved in the energy transfer between cells -- and uric acid levels.

Abdelmalek and colleagues hypothesized that people with higher fructose intakes would have lower ATP, and that those with higher uric acid would be at higher risk for ATP depletion in the liver, following a fructose challenge.

To test those notions, they performed magnetic resonance spectroscopy and conducted a fructose challenge (with an intravenous bolus of the sugar) in a subset of 25 participants.

For the analysis, habitual fructose intake was classified as low or high -- below or above 15 g per day. The cutoff is about the same as Americans would have consumed -- mainly from fruits and vegetables -- before 1900, the researchers noted.

In addition, uric acid levels were deemed to be high if they were above 5.5 mg/dL of serum.

In the study subset, Abdelmalek and colleagues found that:

The effect of the fructose challenge, they reported, was to lower hepatic ATP sharply before a rebound after 50 minutes.

Those with a habitually high fructose intake, they reported, began with lower hepatic ATP on average than those in the low-fructose group. They reached a lower nadir during the challenge, and their rebound was not as complete.

The pattern was similar for those with high uric acid levels, the researchers reported.

The researchers cautioned that the study was small, was not powered to determine significance, was cross-sectional without a control group, and had no randomized intervention.

Further research is needed, they added, to understand the role of uric acid and fructose in the development and progression of NAFLD.

The study was supported by the National Institute of Diabetes and Digestive and Kidney Disorders and the Johns Hopkins University School of Medicine General Clinical Research Center. The journal said Abdelmalek did not make any disclosures.

Posted by Hepatitis C Research and News at 8:59 AM