Medicines Made in India Set Off Safety Worries

Dr. Margaret A. Hamburg, the commissioner of the United States Food and Drug Administration, arrived in India this week to express her growing unease with the safety of Indian medicines because of “recent lapses in quality at a handful of pharmaceutical firms.”

India’s pharmaceutical industry supplies 40 percent of over-the-counter and generic prescription drugs consumed in the United States, so the increased scrutiny could have profound implications for American consumers.

F.D.A. investigators are blitzing Indian drug plants, financing the inspections with some of the roughly $300 million in annual fees from generic drug makers collected as part of a 2012 law requiring increased scrutiny of overseas plants. The agency inspected 160 Indian drug plants last year, three times as many as in 2009. The increased scrutiny has led to a flood of new penalties, including half of the warning letters the agency issued last year to drug makers.

Dr. Hamburg was met by Indian officials and executives who, shocked by recent F.D.A. export bans of generic versions of popular medicines — like the acne drug Accutane, the pain drug Neurontin and the antibiotic Cipro — that the F.D.A. determined were adulterated, suspect that she is just protecting a domestic industry from cheaper imports.

“There are some people who take a very sinister view of the F.D.A. inspections,” Keshav Desiraju, India’s health secretary until this week, said in a recent interview.

The F.D.A.'s increased enforcement has already cost Indian companies dearly — Ranbaxy, one of India’s biggest drug manufacturers, pleaded guilty to felony charges and paid a $500 million fine last year, the largest ever levied against a generic company. And many worry that worse is in store.

“If I have to follow U.S. standards in inspecting facilities supplying to the Indian market,” G. N. Singh, India’s top drug regulator, said in a recent interview with an Indian newspaper, “we will have to shut almost all of those.”

The unease culminated Tuesday when a top executive at Ranbaxy — which has repeatedly been caught lying to the F.D.A. and found to have conditions such as flies “too numerous to count” in critical plant areas — pleaded with Dr. Hamburg at a private meeting with other drug executives to allow his products into the United States so that the company could more easily pay for fixes. She politely declined.

India’s drug industry is one of the country’s most important economic engines, exporting $15 billion in products annually, and some of its factories are world-class, virtually undistinguishable from their counterparts in the West. But others suffer from serious quality control problems. The World Health Organization estimated that one in five drugs made in India are fakes. A 2010 survey of New Delhi pharmacies found that 12 percent of sampled drugs were spurious.

In one recent example, counterfeit medicines at a pediatric hospital in Kashmir are now suspected of playing a role in hundreds of infant deaths there in recent years.

One widely used antibiotic was found to contain no active ingredient after being randomly tested in a government lab. The test was kept secret for nearly a year while 100,000 useless pills continued to be dispensed.

More tests of hospital medicines found dozens more that were substandard, including a crucial intravenous antibiotic used in sick infants.

“Some of the fake tablets were used by pregnant women in the post-surgical prevention of infections,” said Dr. M. Ishaq Geer, senior assistant professor of pharmacology at the University of Kashmir. “That’s very serious.”

Investigations of the deaths are continuing, but convictions of drug counterfeiters in India are extremely rare.

Satish Reddy, president of the Indian Pharmaceutical Alliance, said Indian drug manufacturers were better than the F.D.A. now contends. “More rigorous enforcement is needed, for sure, but this impression that India is overrun with counterfeits is unjustified,” Mr. Reddy said.

But Heather Bresch, chief executive of Mylan, which has plants in the United States and India, said regulatory scrutiny outside the United States was long overdue. “If there were no cops around, would everyone drive the speed limit?” Ms. Bresch asked. “You get careless, start taking risks. Our government has enabled this.” 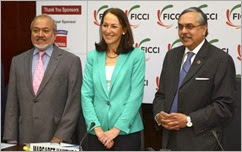 Dr. Margaret A. Hamburg, the head of the Food and Drug Administration, is in India this week to express her concerns. Associated Press

She has gone to conclaves of regulators from Europe and elsewhere to coordinate policing, but Indian officials have so far not attended such meetings.

Many of India’s drug manufacturing facilities are of top quality. Cipla, one of the industry’s giants, has 40 plants across the country that together can produce more than 21 billion tablets and capsules annually, and one of its plants in Goa appeared just as sterile, automated and high tech on a recent tour as those in the United States.

Cipla follows F.D.A. guidelines at every plant and on every manufacturing line, and the company exports more than 55 percent of its production, said Yusuf Hamied, the company chairman.

But Benjamin Mwesige, a pharmacist at the Uganda Cancer Institute in Kampala, said in an interview in July that the institute had stopped buying cancer drugs from India in 2011 because it had received shipments of drugs that turned out to be counterfeit and inactive, with Cipla labels that Mr. Mwesige believed were forged.

He became suspicious when doctors began seeing chemotherapy patients whose cancer showed none of the expected responses to the drugs — and who also had none of the usual side effects. The drugs that had been prescribed were among the mainstays of cancer treatment — methotrexate, docetaxel and vincristine. Laboratory tests confirmed that the drugs were bogus, and Mr. Mwesige estimated that in 2011 20 percent of the drugs that the institute bought were counterfeit.

Enforcement of regulations over all is very weak, analysts say, and India’s government does a poor job policing many of its industries. Last month, the United States Federal Aviation Administration downgraded India’s aviation safety ranking because the country’s air safety regulator was understaffed, and a global safety group found that many of India’s best-selling small cars were unsafe.

India’s Central Drugs Standard Control Organization, the country’s drug regulator, has a staff of 323, about 2 percent the size of the F.D.A.'s, and its authority is limited to new drugs. The making of medicines that have been on the market at least four years is overseen by state health departments, many of which are corrupt or lack the expertise to oversee a sophisticated industry. Despite the flood of counterfeit drugs, Mr. Singh, India’s top drug regulator, warned in meetings with the F.D.A. of the risk of overregulation.

This absence of oversight, however, is a central reason India’s pharmaceutical industry has been so profitable. Drug manufacturers estimate that routine F.D.A. inspections add 25 percent to overall costs. In the wake of the 2012 law that requires the F.D.A. for the first time to equalize oversight of domestic and foreign plants, India’s cost advantage could shrink significantly.

Some top manufacturers are already warning that they may leave, tough medicine for an already slowing economy.

“I’m a great nationalist, an Indian first and last,” Dr. Hamied said. “But companies like Cipla are looking to expand their businesses abroad and not in India.”

American businesses and F.D.A. officials are just as concerned about the quality of drugs coming out of China, but the F.D.A.'s efforts to increase inspections there have so far been frustrated by the Chinese government.

“China is the source of some of the largest counterfeit manufacturing operations that we find globally,” said John P. Clark, Pfizer’s chief security officer, who added that Chinese authorities were cooperative.

Using its new revenues, the F.D.A. tried to bolster its staff in China in February 2012. But the Chinese government has so far failed to provide the necessary visas despite an announced agreement in December 2013 during a visit by Vice President Joseph R. Biden Jr., said Erica Jefferson, an F.D.A. spokeswoman.

The United States has become so dependent on Chinese imports, however, that the F.D.A. may not be able to do much about the Chinese refusal. The crucial ingredients for nearly all antibiotics, steroids and many other lifesaving drugs are now made exclusively in China.

Posted by Hepatitis C Research and News at 8:11 PM