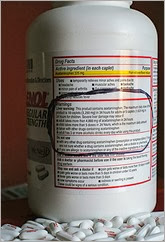 Harvard stem cell scientists studying the effect of nitric oxide on liver growth and regeneration appear to have serendipitously discovered a markedly improved treatment for liver damage caused by acetaminophen toxicity, the root of half of the hospital visits involving acute liver failure in the United States.

The human liver can safely process up to 4 grams (8 pills) of acetaminophen, best known as Tylenol, over 24 hours. Surpassing that amount risks poisoning or killing liver cells. Accidental acetaminophen overdoses commonly occur when people who feel sick but don’t know the dangers posed by the over-the-counter pain and fever reducer exceed the safe dosage. Such poisoning kills hundreds of people each year.

Writing in the journal Cell Reports, the researchers described how nitric oxide, which is commonly used to relax cardiac blood vessels in patients with heart disease, enhances liver growth and regeneration, independent of its effect on blood vessels. Using zebrafish and mice, the research team also showed how manipulating these pathways with drugs could improve treatment of toxic liver injury caused by acetaminophen overdose.

The only federally approved treatment for acetaminophen toxicity, N-acetylcysteine (NAC), is most effective if a patient seeks medical help within 8 to 12 hours of overdose. Unfortunately, most overdose-specific symptoms, such as confusion and intestinal bleeding, don’t occur until the liver injury is critical.

“We tried to model that in our studies where we gave fish Tylenol first, waited 18 hours, and gave them a new nitric oxide-based drug combined with the clinically approved drug,” said study co-senior author Wolfram Goessling of the Harvard Stem Cell Institute. “These drugs worked together to improve liver injury even when out of the previously established therapeutic window, and so we think there’s significant potential for clinical application.”

Goessling and his research associates happened upon the nitric oxide-liver injury connection while investigating the signaling pathways that are important for liver development. Goessling’s lab, which he shares with study co-senior author Trista North, screened thousands of known drugs on zebrafish embryos to see which produced a bigger or smaller liver. The compounds with the most dramatic effect were a family of drugs that affect nitric oxide and nitric oxide signaling.

Andrew Cox, a postdoctoral fellow in Goessling’s lab, conducted a series of experiments to show that nitric oxide enhanced liver formation during organ development in zebrafish and that blocking nitric oxide led to smaller, less-developed livers. Further investigation found that nitric oxide worked through different pathways in the liver than it did in the blood vessels, where its ability to regulate blood flow has been well established.

“During these experiments, we found a recently recognized pathway, called protein nitrosylation, where the activity of proteins gets changed by nitric oxide,” Goessling said. “We think that’s the basic principle behind how it works in liver development.”

The members of Goessling and North’s lab found it was possible to enhance liver growth and regeneration by disrupting the nitrosylation pathway so that nitric oxide could better change proteins in the liver. They found a nitrosylation enhancer currently used in clinical trials for other purposes and began testing it in clinical models of illnesses such as Tylenol overdose, where it proved successful.

“This potential drug doesn’t only work in fish,” Goessling said. “We did use mouse models to show that this might have relevance to human disease.”

If the nitrosylation drug for liver toxicity reaches clinical trials, it would join a handful of other drugs developed from zebrafish research that originated from Harvard Stem Cell Institute labs.

Last year, a compound discovered by North and Goessling while they were working as postdoctoral fellows in the lab of Leonard Zon was found to expand cord blood during hematopoietic stem cell transplants in a Phase 1b clinical trial. Another drug for melanoma, also discovered in the Zon lab, reached the federal Food and Drug Administration approval process in 2011.

Posted by Hepatitis C Research and News at 11:27 PM