Coffee: Good for us? Or bad for us? Two new studies disagree 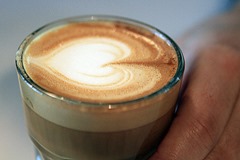 These are the competing headlines pinging around the media universe Monday, causing whiplash among those of us who rely on a cup (or more) of the black stuff to fuel our day.

First up, a new study released by Mayo Clinic Proceedings found that, "Drinking large amounts of coffee may be bad" for people under the age of 55.

"A study of more than 40,000 individuals found a statistically significant 21% increased mortality in those drinking more than 28 cups of coffee a week," the report said.

"More than 28 cups of coffee a week" works out to be at least four cups of coffee a day. Admittedly, that's a lot of coffee. But not exactly unheard of, especially during crunch times such as studying for finals, or staring down work deadlines.

Counter that with another study, also making the rounds Monday, suggesting that drinking four cups of coffee a day could reduce the risk of non-alcoholic fatty liver disease, also known as NAFLD.

The study by Duke-NUS Graduate Medical School in Singapore found that increased caffeine intake could reduce the disease that affects an estimated 30% of American adults.

According to the analysis, slated to be published in the September issue of Hepatology: "[T]hese findings suggested that coffee and tea consumption (equivalent to the caffeine intake of four cups a day) may be beneficial in the prevention and protection against the progression of NAFLD in humans."

Further confusing the issue is the acknowledgment in the first study that men and women who consumed higher amounts of coffee were more likely to smoke and "had lower levels of cardiorespiratory fitness."

According to the Mayo Clinic document, coffee is a complex mixture of chemicals and while it is a major source of antioxidants and has plenty of beneficial health effects, it also carries with it plenty of potential adverse effects because of caffeine’s ability to, among other things, inhibit insulin activity and increase blood pressure.

As might be suspected, more research is needed, the studies both suggest.

"There continues to be considerable debate about the health effects of caffeine, and coffee specifically," said Dr. Carl J. Lavie of the Department of Cardiovascular Diseases, Ochsner Medical Center, New Orleans, and a co-author of the study.

He told the Los Angeles Times that although more research is needed, it might be a good idea to trim back on the excess coffee intake. "All things in moderation," he said.

Posted by Hepatitis C Research and News at 9:56 PM