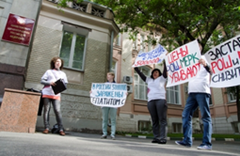 On 24 July 2013 a protest action was carried out in Moscow in front of the Ministry of health of Russia. Activists of the "Patients’ control" came to officials with the requirement to force manufacturers of hepatitis C drugs to decrease prices. The protest took place under the slogans: "There are 5 million people with hepatitis C in Russia", "Treatment costs 500,000 rubles", "Prices Roche and Merck are killing us", "Force Roche and Merck to lower prices".

The same day activists of the "Patients’ control" held pickets at the offices of pharmaceutical companies Roche and Merck and sent letters to them demanding price reductions for hepatitis C treatment.

“As for today 5 million people are affected by hepatitis C in Russia. Not everyone can afford Hepatitis C treatment. People are getting into debt, sometimes they are forced to sell their homes to buy treatment. We have repeatedly asked the manufacturers to lower prices, but haven’t received any reply. Our last hope - that the new composition of the Ministry of Health will hear us and will take drastic measures to ensure affordable treatment - namely, force companies to decrease prices”, - says Andrey Skvortsov, leader of “Patients’ control” movement.

"Hepatitis C is curable", - says Alexei Mikhailov, activist. "If we cure all people the epidemic would stop. If prices are reduced the state could provide treatment to more people, save the budget and, thus, more people could afford to buy life-saving drugs".

Russia is not the only country where activists call on the manufacturers of pegylated interferon to cut prices. In anticipation the International Hepatitis Day similar events take place or will take place in Ukraine, Georgia, Armenia, India, Thailand, Moldova, Latvia, the United States and other countries.

The average price of hepatitis C treatment (48 weeks of pegylated interferon in combination with ribavirin) in the commercial market in Russia is more than half a million of rubles (~$15.000) while the drugs do not always allow the patient to fully recover from a virus and have a number of serious side effects.

Because of the very high cost of HCV treatment the state provides with treatment an extremely small number of patients: according to the independent patients monitoring, the federal program in 2012 covered less than 4,000 patients.

Posted by Hepatitis C Research and News at 5:53 PM