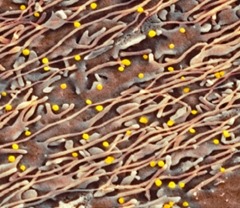 Researchers have created the first strain of mouse that is completely vulnerable to hepatitis C. The advance, reported today in Nature1, promises to aid efforts to develop a vaccine against the virus, which causes liver disease and cancer.

Chimpanzees have been the primary animal model for studying hepatitis C infection over the last several decades. But in the past few years scientists have begun phasing out chimp experiments, a process accelerated by the US government’s decision to retire most of its research chimps. That has created a need for alternative models to test potential drugs and vaccines.

Enter the mouse, which is naturally immune to hepatitis C. To transform the rodent into a model organism for studying infections with the virus, researchers genetically altered the animals to hamper their natural immune response. The team also engineered the animals to produce proteins found on the outside of human liver cells.

“It has been very difficult to get to this point,” says Alexander Ploss, a virologist at Princeton University in New Jersey and lead author of the study.

In 2011, Ploss — then at Rockefeller University in New York — and his colleagues showed that hepatitis C could infect mice engineered to produce the two human proteins2. But the virus did not replicate well in those animals, making them a poor model for human infections. So the team created another strain by breeding the human-protein-containing mice with animals that carried a broken version of a gene involved in antiviral responses. The result, they report, is mice in which hepatitis C can take root and flourish, creating new viral particles to spread the disease.

“For the first time you can study the whole spectrum of hepatitis C replication” in a mouse model, says Lishan Su, an immunologist at the University of North Carolina at Chapel Hill, who was not involved with the study.

Researchers have previously tested candidate hepatitis C drugs using a mouse containing human liver cells, developed in 2010 by Karl-Dimiter Bissig, a virologist at Baylor College of Medicine in Houston, Texas, and his colleagues3. But that mouse model had no immune system. Su says that Ploss and colleagues' strain may be more useful for testing vaccines, because most of the mouse's immune system is intact.

Michael Houghton, a hepatitis C researcher at the University of Alberta in Edmonton, Canada, says that scientists should still be careful when interpreting results from tests with the latest mouse model. The mouse's immune system is still partially damaged, so the response to vaccines may be altered — which could cause falsely negative results when testing vaccines that are actually effective.

“This model still cannot replace chimpanzees,” says Ploss, who is working with his colleagues to improve the mouse strain. “It gives us a first glimpse of what may be possible with mice in coming years.”

Posted by Hepatitis C Research and News at 7:25 PM