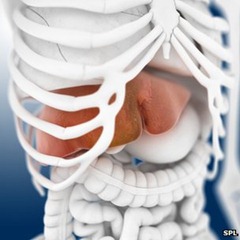 Some patients with severely damaged livers may not need a transplant as their own organ is actually regrowing, say doctors at a hospital in London.

They made the discovery by looking at a rare group of patients given a transplant while their own damaged liver is left in the body.

A study, in the American Journal of Transplantation, suggests doctors can predict which patients do not need a transplant as their liver is healing.

King's College Hospital has a leading liver transplant centre and is one of few places to perform "auxiliary transplants".

They are performed in sudden cases of liver failure caused by overdoses or viral infections, rather than the long-term damage caused by alcohol abuse.

Normally in organ transplants one organ comes out and a new one goes in. However, in this complex operation the transplant is put in beside the old liver.

After any transplant a patient needs to take a lifetime of drugs to suppress the immune system in order to avoid rejection. The drugs leave the body vulnerable to infection.

However, if the patient's liver does eventually recover then they can come off the immunosuppressant drugs and their body will get rid of the transplant.

The transplant is used to get the patient past the critical stage of the illness.

But the recovery happens only in some patients. In the study, the transplant was no longer needed in seven out of 11 patients.

So doctors analysed the detailed chemistry inside the liver cells of patients and looked for differences between those who recovered and those who did not.

Dr Varuna Aluvihare told the BBC: "There was a big difference right from the point of transplantation in the expression of some very small molecules between the group that would, three years down the line, regrow their liver versus the group that never did."

Those molecules regulated the way cells in the liver grow.

"Some of them were already starting to regrow. So what we may be able to do is come up with a better set of tests to allow us to identify those patients who are already regrowing and may not need transplantation.

"So we may be able to remove a group from the transplant list."

The liver does have a phenomenal ability to regenerate. In healthy people it will recover in the space of months even if a large amount is taken away.

People who need a transplant because of acute liver failure are seriously ill. Even if doctors could tell which patients' livers were already on the path to recovery, they would still need to keep those patients alive long enough for the liver to return to form.

Dr Aluvihare argued this would be possible as a small amount of restored liver function would be enough for patients to leave hospital.

He said there are cases at King's of patients recovering while they were on the waiting list.

"I would say five to 10 patients a year we seriously consider for emergency transplantation and then they start recovering.

"That tells us there probably is a pool there and there is probably quite a lot of mileage in identifying people would would recover."

Whether this would work is still uncertain. The team have received funding to look for those chemical differences in the blood of patients.

Posted by Hepatitis C Research and News at 9:19 AM