Hepatitis C in the USA and Europe: two problems, one solution 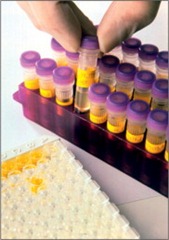 Nearly half of Americans who test positive for hepatitis C virus (HCV) infection with an initial antibody test do not receive the follow-up RNA testing that is necessary to show whether they have recovered or have an ongoing infection. If left untreated, ongoing infection could lead to serious liver disease and death. This worrying finding comes from a new study by the US Centers for Disease Control and Prevention (CDC). In about 20% of cases, the body clears HCV infection unaided, but most people need treatment—typically pegylated interferon and ribavirin. About 3 million Americans are thought to have hepatitis C, but because the disorder can be asymptomatic for years, only a quarter know that they are infected. In Europe, an estimated 9 million people are infected, but only half have been diagnosed.

The CDC study examined surveillance data from eight US sites for 2005—11. Another key finding was that most new cases—67% of those with ongoing infection—were in people who were born between 1945 and 1965 (so-called baby-boomers). The CDC now recommends that all baby boomers receive routine HCV testing.

In Europe, the heterogeneity of the population means that although baby boomers might still have a role, other groups are more at risk. Many of these groups—including injecting drug users, dialysis patients, sex workers, prison inmates, and migrants from endemic regions such as sub-Saharan Africa and the Middle East—are already on the edges of society, and strong advocacy is needed to ensure that they receive appropriate diagnosis and care. France and Germany have HCV screening programmes that target many of these groups, but a Europe-wide approach will be needed if control is to be achieved.

Promising new drugs are in the pipeline, with some, such as sofosbuvir, achieving sustained virological responses in 90% of patients when combined with interferon alfa and ribavirin in phase 2 trials. Substantial decreases in HCV infection are within reach, but only if governments worldwide act together to implement policies and provide funding for effective screening, follow-up, and treatment.

Posted by Hepatitis C Research and News at 6:57 PM