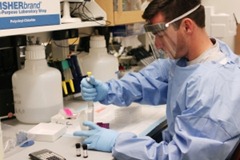 Duke has a lab that is studying HIV vaccine research, in the Duke Human Vaccine Institute. Brad Lockwood, a research analyst, works in the lab.

In 2006, a man walked into a sexually transmitted disease clinic in Lilongwe, Malawi, in search of treatment.

Now, seven years, dozens of blood samples and scores of medical tests later, his unique case is still being studied in search of a scientific discovery he never could have imagined.

When the patient walked into the clinic, UNC researchers stationed there identified in his blood an acute HIV infection, the earliest stage of the disease.

His blood samples were then sent to a laboratory run by scientists from Duke University — and now have led to a discovery published earlier this month that scientists are calling an important step in the path to creating the ever-elusive AIDS vaccine.

“In truth, when we enrolled these patients, we didn’t know we’d find this,” said Dr. Myron Cohen, UNC’s associate vice chancellor for global health, who worked on the study.

“This came as a really fantastic example for the prepared mind.”

Following the ‘road map’ to a cure

When the African patient — referred to throughout the study as CH505 — was first identified with the acute infection, researchers took special interest in his case, hoping to follow the evolution of the virus and the body’s response.

He was enrolled in an intense study that involved taking a series of blood samples, Cohen said.

“By seeing them very frequently, we could understand in tremendous detail what was happening,” he said.

And Dr. Barton Haynes, director of the Duke Human Vaccine Institute and head of the research team, said what happened in this particular patient was quite rare.

Haynes said the response of the immune system in HIV-infected individuals can be compared to an arms race, with each side trying to outdo the other. He said one strain of the virus will initially infect the patient, but as soon as the body creates an antibody response to fight it, the virus has already mutated and the antibody is ineffective.

“In most people, that arms race going back and forth doesn’t lead the antibody in the right direction,” he said. “But in some rare individuals, such as the individual from the UNC clinic in Malawi, the right kind of antibodies are made.”

These antibodies — called broadly neutralizing antibodies — are proteins that work to fight all different variations of HIV, creating a powerful and more effective immune system response against the virus. But few patients have them, Haynes said.

Now that the antibodies have been found early on in one patient, scientists hope they can study this particular case to figure out a way to artificially induce the same response in others.

“The breakthrough is that no one’s ever been able to study how a broadly neutralizing antibody evolved from the beginning,” Haynes said.

“This is the first time that we’ve seen the antibodies that we want to induce, how they develop and what pathways they’re taking,” he said.

Scientists are now attempting to recreate in animals what they saw happen in the patient through a series of immunizations, Haynes said, to try to lead the body to produce the antibodies itself.

“No one has been able to study what happened to the virus in response to it from the beginning, thereby providing a road map for us to follow — and that’s the key,” he said.

“The challenge now is to capitalize on that.”

Marybeth McCauley — senior clinical research manager at Family Health International, which managed the study — said the ultimate goal of creating a vaccine is still far off, but she emphasized that the research now is much more focused.

“There’s a long way to go, but this was an excellent breakthrough,” she said.

“And if anyone is going to do it, it’s going to be Bart and his people.”

The results of this study, which were published earlier this month in Nature magazine, were the culmination of a seven-year, multi-million dollar grant from the Center for HIV/AIDS Vaccine Immunology that led to the establishment of 14 clinical sites around the world.

The grant — which was awarded to Haynes and involved investigators from six different institutes — has contributed to efforts to create a vaccine. But Dr. Charles Hicks, an associate professor at Duke and an investigator at one of the clinical sites involved in the study, said the real success between the two universities started years before the grant even existed.

“We started working together even before (the grant), and that’s what helped us build the relationships we have now,” he said.

Hicks, who has been working with Duke for nearly 20 years, said when he first arrived, the relationship between the schools was different — competitive, not collaborative.

“It was the old zero-sum game,” he said. “The prevailing point of view was that if one institution got something, it meant the other hadn’t gotten it.”

But Hicks said after UNC received money for a grant that Duke had not, the two schools started to evaluate their strengths and consider how they might complement one another.

“Then there was this notion that, ‘You know, combining we’re going to be more than the sum of the two — we’re actually going to be a multiplication of the two,’” he said.

Susan Fiscus, a UNC professor of microbiology and immunology who participated in the study, said the relationship between the two schools has made both of them more successful.

“Competition is good, and you strive for your best if you’re working against some competitor who’s also very good,” Fiscus said.

“But by the same token, working together — and (the project) was a remarkable collection of some of the brightest minds from all around the world putting aside their egos to work together for this common cause — I think it worked out very well.”

Posted by Hepatitis C Research and News at 7:08 PM