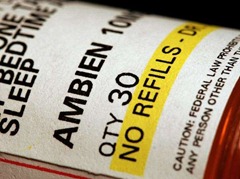 The Food and Drug Administration says that the current recommended doses for the prescription sleep medication Ambien and its generics should be cut in half for women and for some men. (Tim Boyle / Getty Images / January 30, 2008)

The Food and Drug Administration, citing safety concerns, has called on manufacturers of the drug Ambien and its generic equivalents to lower the standard dosages of the insomnia drug now sold, and it is warning physicians that at current dosages, some patients are at risk of impairment in the morning.

The agency cited new data showing that the morning after taking the medication, some patients continued to have blood levels of zolpidem, the active ingredient in Ambien, that could disrupt driving and other activities that require alertness. That problem is more common for women, who clear the medication from their systems more slowly, and for those who use the extended release form of the medication, the FDA said in a statement.

In prescribing the immediate-release form of zolpidem to patients with sleep difficulties, physicians should routinely recommend that women take a 5-milligram dose instead of a standard dose of 10 milligrams, the FDA recommended. For men, a standard dose would be between 5 and 10 milligrams. These forms of zolpidem are marketed as generic medications under names such as Edluar and Zolpimist as well as under the name Ambien.

In driving simulators and laboratory studies, 15% of women and 3% of men who took a 10-milligram dose of Ambien still had worrisome concentrations of the drug in their blood eight hours later. Among those who took a 12.5-milligram extended-release tablet of Ambien, the problem was even more common: 1 in 3 women and 1 in 4 men had blood concentrations of Ambien that would raise the risk of a motor vehicle accident eight hours later.

At the lower dose of extended-release Ambien now recommended by the FDA, 15% of women and 5% of men still had high levels of the drug in their system in the morning.

The FDA's latest step follows a litany of reports to the agency about "hangover" effects after the use of zolpidem. Some have reported engaging in routine activities such as eating or cooking while in a trance-like state under the medication's influence.

Between 6% and 10% of Americans use prescription sleep medications, a class of drugs called hypnotic sedatives. A recent study found that those who took any of these medications had a slightly higher risk of cancer as well, and that the heaviest users of sleep aids were 35% more likely to be diagnosed with cancer.

Despite evidence that they may not add much to a night's sleep, Americans in 2010 filled about 66 million prescriptions for "hypnotics and sedatives," according to IMS Health, which tracks drug trends. That makes sleep aids the 20th most used class of prescription therapies.

Posted by Hepatitis C Research and News at 10:45 PM