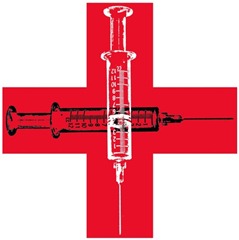 For nearly 40 years scientists have been working on vaccines against all kinds of addictions, including nicotine, marijuana and alcohol. (Illustration by Wes Bausmith / Los Angeles Times)

Even if it proves effective, it can't cure the underlying factors that make people prone to drug use, including poverty, violence and lack of opportunity.

My aunt Marion is in the hospital dying of liver and kidney failure, the result of her 20-year struggle with heroin use. I was told of her imminent death the same day news broke about a vaccine against the drug. "Breakthrough heroin vaccine could render drug 'useless' in addicts," one headline read. "Scientists create vaccine against heroin high," proclaimed another.

Meanwhile, my aunt finds temporary relief in the ever more frequent administration of opiate pain medication — the very kind of drugs she used illegally.

The idea of an anti-addiction vaccine is not new. For nearly 40 years scientists have been working on vaccines against all kinds of addictions, including nicotine, marijuana and alcohol. There are even trials of vaccines to prevent obesity. None of the anti-addiction vaccines has yet received Food and Drug Administration approval, however, and most of the studies are still in their early stages.

The headlines trumpeting a heroin vaccine were based on a finding that the drug had proved to be effective on mice during trials in Mexico (a nation that could use some good news related to drugs). Scientists now plan to test the patented vaccine in humans. If all goes well, the vaccine could be available in five years — too late for my aunt but providing a glimmer of hope for the estimated 1 million heroin addicts in the United States. Perhaps.

Six years ago, when I was a doctoral student researching heroin addiction in northern New Mexico, I received an email from a scientist studying a possible vaccine against the drug's use. The study was in rat models, but early results were promising and suggested the likelihood of a therapeutic effect for humans. Aware of the devastating heroin epidemic in New Mexico, which had the highest rate of heroin-related deaths in the Unites States, and of my work trying to understand it, the scientist wanted to offer some hope. He wrote that he could imagine a time when heroin addiction, in New Mexico and around the world, would be a thing of the past. I wanted to believe him, but I was less optimistic.

As an anthropologist with personal ties to the problem of addiction, I have studied the social and historical influences of drug use, and that has made me skeptical about the idea of a vaccine. Entrenched poverty, social inequality and personal despair all promote drug use, and these things profoundly shape the unequal outcomes of the addicted. Where I lived and worked, illicit drugs were more available than mental health services, and heroin was often used as a "medicine" to relieve the suffering of everyday life.

On the afternoon of the scientist's email, I returned to the drug recovery clinic where I worked caring for patients undergoing heroin detox and described the idea of a vaccine against addiction to my colleagues. Jose, a drug counselor with a portrait of Jesus tattooed on his needle-scarred forearm, called it science fiction. Monica, the clinic's cook, doubted that such advances, if they actually materialized, would ever benefit the tecatos of northern New Mexico. She pointed out that the clinic could barely afford day-old tortillas, much less expensive new vaccines. We dismissed the idea and returned to addressing the day-to-day struggles of our heroin-addicted patients, many of them friends and family.

The development of an anti-addiction vaccine still faces major challenges. In the past, vaccines that were effective in animal models have proved ineffective in humans. This is partly because the molecules introduced into the blood to generate antibodies against the effects of the drug on the brain are incredibly tiny. The human immune system is vastly more complex than that of the animals used for testing, and it tends to simply ignore the vaccine. Scientists are working their way around this problem by attaching proteins and chemicals to the molecules to induce antibody production. Such anti-addiction "vaccine cocktails," as they are ironically called, reflect the growing perception that addiction is a biologically based disease of the brain, making the very idea of a vaccine against addiction plausible.

One problem, though, is that even the most effective anti-addiction vaccine can't cure the underlying factors that make people prone to using drugs, including poverty, violence and lack of opportunity. Rather, the vaccines are aimed at preventing a drug user from experiencing the pleasure associated with a particular drug. When a mouse no longer feels pleasure from a drug because of a vaccine, it doesn't have the option of turning to another pleasure-producing substance. But humans do. A vaccine against pleasure derived from one kind of drug use might well spawn other forms of pleasure-seeking, especially when the drugs were being used in an attempt to relieve suffering.

Posted by Hepatitis C Research and News at 6:34 PM