Studies see link between HIV and abuse among women 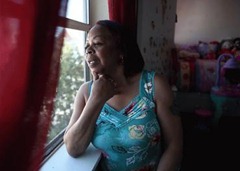 Steptoe now sees her medication regimen as prolonging her life

Diagnosed with HIV in the late 1980s, Cassandra Steptoe didn't tell anyone for years, and she didn't get any treatment.

She was depressed and hopeless after a lifetime of physical and sexual abuse. She assumed the infection would kill her. But, somehow, she survived - not just the HIV infection, but far more.

During the past decade, she's received help overcoming the trauma from the years of abuse, and in turn, she's finally faced her HIV diagnosis. And she is far healthier for it, she says.

"I'm a stronger person, a better person, than I was before," said Steptoe, who started treatment in 2003 at the Women's HIV Program at UCSF. "Now when I look at my pills, it's like another day of life."

Steptoe's story - especially her history of trauma and abuse - is hardly unique among women with HIV and AIDS, say doctors and public health experts. In fact, trauma and post-traumatic stress syndrome are closely tied both to the risk of becoming infected with HIV and lower rates of successful treatment, according to two recent UCSF studies.

And health care providers could better serve many of their female HIV patients if they tackled trauma at the same time as the infection, said Dr. Edward Machtinger, director of the Women's HIV Program and lead author of the studies.

"Screening and responding to trauma needs to be a core element of health care for HIV-positive women, alongside medication and CD4 counts and viral load," Machtinger said.

Machtinger's studies were published this month in the journal AIDS and Behavior. The first study, an analysis of 29 previous reports, found that HIV-positive women were two to six times more likely to have suffered trauma or post-traumatic stress than women without HIV.

The second study looked at patients in UCSF's Women's HIV Program. Based on surveys given to 113 patients, women who had suffered a recent trauma were four times more likely than women who hadn't suffered a trauma to have detectable levels of virus in their blood - meaning that their drug treatment wasn't working.

Those women were also nearly four times more likely than their peers to have unprotected sex with someone who wasn't infected with HIV - or whose status was unknown.

"It appears to us that trauma fuels the HIV epidemic among women," Machtinger said.

Health care providers who work with HIV-positive women said physical and sexual abuse is without question common. And when women have experienced a very recent trauma or are in an abusive relationship, the effect on their HIV treatment can be disastrous.

These women may suffer depression or self-esteem issues that make it difficult for them to seek treatment, health care providers said. Or women in an abusive relationship may have partners who won't let them see doctors or pick up their medications.

In many cases, women haven't told their partners that they are HIV-positive, which makes it more difficult to get treatment, said Mary Lawrence Hicks, a nurse practitioner at San Francisco General Hospital who works in the women's HIV clinic there.

"These (HIV) meds must be taken at least on a once-a-day basis, and that's hard for anyone to maintain," Hick said. "But with the chaotic lifestyles that some folks end up in when there's a lot of trauma, it's very, very difficult."

Like many health care providers who treat HIV patients, Hicks said that working with HIV-positive women requires as much focus on mental health care as traditional medical treatment. Many women-centered HIV clinics have social workers and psychiatrists on staff.

"We can't just say here's the prescription and I'll see you in six months," said Dr. Deborah Cohan, director of the Bay Area Perinatal AIDS Center at San Francisco General Hospital. "That's not a realistic way of taking care of these women, because their lives are much more complicated than that."

For Steptoe, confronting her past trauma was one of the first steps she needed to take toward treating her HIV. She's lucky, she said, that she lived so long without medical care, even as she watched other women die of AIDS.

After moving to San Francisco in 2001, Steptoe went to UCSF for treatment and met Machtinger. He got her started on antiretroviral drugs and pushed her toward counseling programs. Her self-esteem has skyrocketed, she said.

She's now living with her granddaughter and taking care of them both. Her HIV is under control, and she said she's never felt healthier.

"I want to tell other women, we don't have to be beaten up on or have low self-esteem and no value or respect about our bodies," Steptoe said. "I'm on the right path now."

Posted by Hepatitis C Research and News at 12:43 PM