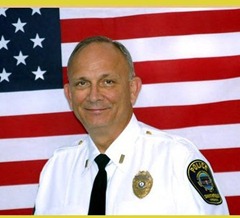 DO YOU KNOW A HERO? I DO!
By Kathie Beach
In 1988, my husband Kurt, a Smithfield Police Officer, responded to an emergency call and tried to save a child's life who had been born with spina bifida and had a trachometry in her throat to be able to breathe. On this day, the child was not breathing and her heart had stopped. Kurt proceeded mouth to trach breaths and CPR on her having to suck the blood and mucous out of the airwaves to try to give her oxygen. It was to no avail, the child, sadly died. The mother of that precious child knew Kurt did everything within his power to save her. She considers Kurt a hero. So do I.
In 1988 the police department was not trained on blood pathogens and Hepatitis C had not even been classified yet, being called Non A and Non B Hepatitis. Kurt's attempt to save a life put his life in jeopardy. Later, he found out the terrible news that he had contracted this disease when he came in contact with the child's infected blood due to multiple blood transfusions her condition had demanded.
All these years God has kept His hand on Kurt. Although he was diagnosed with Hepatitis C and aggressive chronic liver disease, he was able to work and go about his life. He worked hard and gave tirelessly of whatever was required of him. He endured countless tests, procedures and experimental therapies to try to rid his body of the disease. The doctors were amazed by his stamina, his faith and his encouraging ways. He bounced back again and again and I suppose we always thought he would. Then in May of this year he ended up at Obici hospital for a five day stay. From there he went to MCV where his team of doctors did extensive tests and evaluations. Another stay at Obici and another round at MCV and then finally this week we are told by his team of doctors that Kurt needs a new liver and we need to prepare him for a live donor as a wait for a DD (deceased donor) is in the 100,000s. They did not mince words that Kurt could die waiting for a liver donor.
Kurt needs a living donor liver transplant.
This is a procedure that involves the removal of the recipient's (Kurt) native liver and replacing it with a potion of the living donor's liver. Both Kurt's and the donor's livers will regenerate to normal functional volume within weeks. AMAZING!
Kurt has a wonderful team of doctors who have monitored him over the years and when they convened they said he is a perfect candidate for this operation. The doctor went so far as to say 'Kurt, you will feel like a new man. Able to work, play and live and you will feel better than you have in years.'
My hero needs a hero, he needs a living donor.
(Just to clarify...this was an email petition sent out to friends and family in 2008. Kurt received a living liver donor in 2009 after 3 failed deceased donor attempts.)
Posted by Hepatitis C Research and News at 8:55 PM