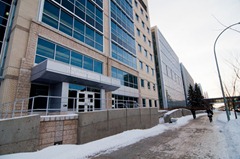 Vaccine could protect against all forms of virus

EDMONTON (CUP) — A University of Alberta team has made a breakthrough in hepatitis C research, creating a vaccine that could potentially combat all forms of the liver-destroying virus.

The vaccine was developed by Michael Houghton, a U of A researcher who first discovered the hepatitis C virus (HCV) in 1989. The vaccine exposes the human body to a non-infectious sub-unit of the HCV so that it can begin developing antibodies to protect against the virus. These antibodies are able to cross-neutralize against the seven genotypes of the virus.

“Previously, many people believed that the virus was impossible to neutralize with just one type of vaccine because there are so many different genotypes,” explained John Law, a member of the U of A research team.

“This is a proof of principle finding — showing that we can make a vaccine that can allow cross protections of many different varieties of the hepatitis C virus.”

Houghton began developing a vaccine more than a decade ago, and was recruited by the U of A’s Li Ka Shing Institute of Virology three years ago to continue his research. Law attributes much of the success of their team to Houghton’s dedication.

“We didn’t really make anything special. Mostly it’s been the efforts of Dr. Houghton. We’ve persisted and been able to go through the hurdles of finally getting the samples, getting the trial, and eventually testing the results and being able to find out the answer,” Law said.

“He stayed with his idea and eventually carried it out to a point where now we can see there is a very good potential for things that are going to happen.”

Law said an obstacle in creating the vaccine is the HCV’s ability to mutate quickly and exists in a variety of genotypes, similar to AIDS.

Law predicts that it will still take another five to seven years before the vaccine is ready to be released. The research has only completed the first of three phases needed for the FDA to approve the vaccine. Although its safety has already been tested, the vaccine will require further testing in a clinical setting.

The vaccine has already been presented by the research team to various other members of the virology community.

Last weekend, the team travelled to Montreal to present their findings at a Canadian symposium for hepatitis C. Law is hopeful that the team can improve upon their vaccine further before releasing it to the public.

“We’re basically trying to understand those antibody responses, and trying to find out which part of the sub-unit the antibody recognizes. There might be some common area between the genotypes that the antibody can see that is therefore blocking infections of HCV,” Law explained.

“We can maybe learn the mechanism to increase the efficacy of the vaccine and be able to design a better vaccine and move forward.”

Posted by Hepatitis C Research and News at 10:35 PM