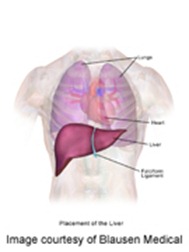 FRIDAY, Feb. 3 (HealthDay News) -- Alanine aminotransferase (ALT) levels can be used to discriminate between individuals infected with hepatitis C virus (HCV) RNA and those at low risk for liver disease (negative HCV RNA and hepatitis B surface antigen, low alcohol consumption, no evidence of diabetes, and normal body mass index and waist circumference), according to a study published in the February issue of Hepatology.

Constance E. Ruhl, M.D., Ph.D., of Social and Scientific Systems Inc. in Silver Spring, Md., and James E. Everhart, M.D., M.P.H., of the National Institutes of Health in Bethesda, Md., evaluated the ability of serum ALT activity to differentiate between those with and without liver disease among participants in the 1999 to 2008 U.S. National Health and Nutrition Examination Survey. Serum ALT activity was measured in 18,518 participants; of these, there were 259 cases positive for HCV RNA and 3,747 at low risk for liver injury.

Abstract
Full Text (subscription or payment may be required)

Posted by Hepatitis C Research and News at 2:05 PM