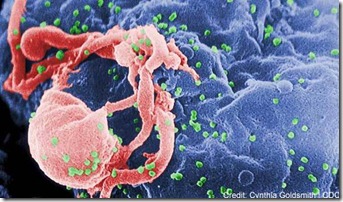 An image of the human immunodeficiency virus (HIV), taken with a scanning electron microscope. The multiple round bumps on the cell surface represent sites of assembly and budding of HIV particles. HIV is responsible for Acquired Immunodeficiency Syndrome (AIDS).

A heterosexual person infected with HIV will transmit the virus to their partner once in every 900 times the couple has unprotected sex, according to a new study conducted in Africa.

However, the exact number of sexual acts that are needed to transmit the virus can vary tremendously depending on the amount of the virus in the infected person's blood, said study researcher James Hughes, of the University of Washington in Seattle.

In fact, the amount of virus in the blood is the single most important factor in determining whether HIV is passed between sexual partners, the study found. For every tenfold increase in the concentration, there is about a threefold increase in the risk of transmission during a single sexual act.

People with very high blood concentrations of the virus (such as those who very recently acquired the infection) may need to have sex only 10 times to transmit the virus, Hughes said. "The average can be a little deceptive," Hughes said.

The new findings reinforce the idea that the best methods for reducing HIV transmission are those that decrease the concentration of the virus in the blood, as can be done with antiretroviral drugs, Hughes said. A study published last year found the drugs could reduce the transmission of HIV between partners by 96 percent.

Earlier studies attempted to estimate the rate of HIV transmission, but were typically quite small, and did not measure the concentration of the virus in the blood throughout the entire study period.

The new study included 3,297 couples from sub-Saharan Africa that were "HIV-discordant," meaning one partner had HIV while the other did not. The HIV-infected partners in the study were tested periodically over the two-year study for the amount of HIV in their blood. Infected partners were also interviewed every month and asked how many times they had sex, and whether they used protection.

The uninfected partners were tested periodically to see whether they had acquired HIV. The researchers used genetic testing of the virus to confirm that any new HIV infections had been acquired from the study partner designated at the study's start.

Men were about twice as likely to transmit HIV to women as women were to men. This increased risk of transmission could be attributed to higher virus concentrations in the blood of men compared with women, according to the study. In addition, women were more likely to have genital herpes, which increases susceptibility to HIV.

Condoms were reported to be used in 93 percent of sexual acts, but the researchers suspect their use was overreported. Therefore, condoms actually may be even more effective at preventing HIV transmission than the 78 percent reduction that the researchers estimated, Hughes said.

The study relied on self-reports, which might be wrong. However, errors in reports of the number of sexual acts would be unlikely to affect most of the study results, Hughes said.

The average risk of HIV infection per sexual act estimated in the study is consistent with what has been found by previous research, but there are many situations in which that number may not apply," said Dr. Myron Cohen, a professor of medicine, microbiology, immunology and public health at the University of North Carolina at Chapel Hill, who was not involved in the work.

That's because the participants included in the study are couples that have remained together and discordant over a long period of time. This indicates the couples might have some biological protection against transmission, Cohen said.

"The true estimation might be higher if you were studying different kinds of people," Cohen said.

While most of the findings are likely generalizable to other countries, the number of sexual acts needed to transmit the virus is likely specific to the African population studied, Hughes said. Previous studies in the United States have found a lower transmission rate.

In addition, the findings only apply to heterosexual couples, and not men who have sex with men, a group that is likely to have a much higher transmission rate, Hughes said.

Pass it on: The best way to reduce the risk of HIV transmission is to lower the amount of the virus in the blood.

Posted by Hepatitis C Research and News at 11:34 AM