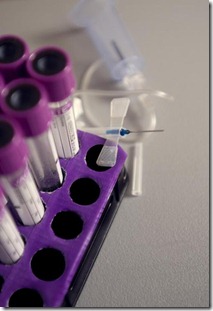 Hepatitis C can be spread through blood and infected needles. (Centers for Disease Control and Prevention)

A major advance in treating hepatitis C appears to be on the horizon. Researchers reported Wednesday that combining two antiviral medications was effective in stopping the infection in some patients who were not helped by the traditional treatment.

Progress in fighting hepatitis C infection is of high importance because millions of Americans have the virus. However, the standard treatment with the medication interferon, while effective in many people, is linked to severe side effects. "The challenge ... has been to identify regimens that are more effective, shorter, and have a better side-effect profile," said Dr. Raymond T. Chung, director of hepatology at Massachusetts General Hospital.

Hepatitis C is an infectious disease that can cause liver inflammation and damage. It's spread through exposure to infected blood, such as via contaminated needles or through sexual contact.

The new study, published in the New England Journal of Medicine, is a phase-2 trial of 21 people with hepatitis C who had not responded to previous therapy. They were randomly assigned to receive the two antiviral drugs daclatasvir and asunaprevir or those two antivirals with interferon and ribavirin (another drug used to treat hepatitis C infection).

The study showed that virus activity was halted in 36% of the patients receiving only the two antiviral medications over 24 weeks of treatment. Stopping the virus from replicating halts the infection. All but one of the patients in the second group, who were receiving the combination of four medications, showed a positive response to the medication after 24 weeks.

The research, while preliminary, proves that it may be possible to treat hepatitis C infection with antivirals only. Patients with a type of virus called genotype 1b had a particularly strong response to the antivirals. "Overall, these results suggest that further research with combinations of direct-acting antiviral agents, with or without [interferon] and ribavirin, is warranted," wrote the authors, led by Dr. Anna S. Lok, at the University of Michigan Medical Center.

Chung, who wrote a commentary accompanying the study, said: "We are on the threshold of a treatment revolution that will greatly improve the effectiveness of hepatitis C virus therapy by dramatically increasing the number of persons treated."

Studies are underway to further evaluate the effect of combining antiviral medications for hepatitis C treatment.

Posted by Hepatitis C Research and News at 6:09 PM