A Glucose Meter That Detects Viruses 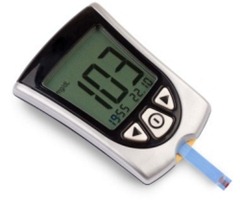 Medical Diagnostics: Researchers convert device for monitoring diabetes into one that can spot hepatitis B

“Our idea was to start with a technology that is already mature,” says Yi Lu of the University of Illinois, Urbana-Champaign. He and his team repurposed glucose meters, which people with diabetes commonly use to monitor their blood sugar, into virus meters by using glucose as a proxy for viral DNA. The scientists designed a chain of biomolecular interactions to link the two.

With hepatitis B as the virus they chose to detect, they first made two DNA probes that each would recognize half of the virus’s DNA sequence. The researchers then attached one probe to a tiny magnetic bead and the other to invertase, an enzyme that turns sucrose into glucose.

They tested their system by adding both probes to a solution of hepatitis B DNA at a known concentration. As the mixture incubated for a couple of hours, each strand of viral DNA bound both probes, thereby linking the enzymes to the beads. The researchers then isolated the beads with a magnet and placed them in a sucrose solution, where the enzymes slowly produced glucose. After three hours, the scientists removed the beads and measured the solution’s glucose concentration with a glucose meter.

Based on the measurement, they could determine how much invertase was present and, in turn, the amount of viral DNA in the original solution. Their system could detect hepatitis B DNA down to 40 pM, a level adequate to diagnose the disease at some stages, but not all. To improve the method’s sensitivity, Lu wants to increase incubation times and possibly engineer an enzyme that produces more glucose.

Posted by Hepatitis C Research and News at 9:35 AM