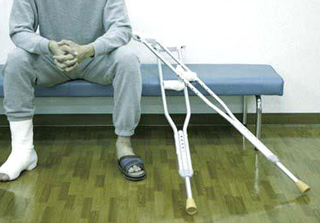 People with HIV are at higher risk of bone fractures than the general population, researchers reported.

And the increased risk appears to be driven mainly by fragility fractures at the wrist, vertebra, and femoral neck, according to Benjamin Young, MD, PhD, of the Rocky Mountain Center for AIDS Research, Education, and Services in Denver, and colleagues.

One new finding, Young said in a statement, is that the state of the patient's immune system at its worst point -- that is, its lowest CD4 count -- is associated with an increased risk of fracture.

The findings may help improve clinical management of bone health in HIV-positive people, Young added, noting that the optimal care "is not well defined and remains controversial."

Low bone mineral density has been observed among HIV patients for many years, but there is limited data on the incidence of fractures, Young and colleagues noted.

An analysis of nearly 120,000 veterans, reported in 2010, suggested HIV was a risk factor for fragility fracture. And other studies have suggested the prevalence of fractures among those with HIV was increased, compared with other groups.

The study has data on incident fractures from 2000 through 2008; Young and colleagues included all 5,826 participants who had at least two clinical visits during that time.

For comparison, they used data from the National Hospital Ambulatory Medical Care Survey of outpatient departments, which had fracture information through 2006.

On the other hand, rates of fracture in the outpatient survey did not change significantly from 2000 through 2006, the researchers reported.

But rates in the HIV cohort were always higher than those in the outpatient survey, they found:

• The differences were statistically significant in most years overall and for men, but not for women, who formed 21% of the HIV-positive cohort.

Men ages 25 through 54 in the HIV-positive cohort had significantly more fractures at the wrist and vertebra (at P<0.01 for each comparison) than did men of the same age in the outpatient survey.

Similarly, HIV-positive women ages 25 through 54 had more fractures at the vertebra and femoral neck sites, significant at P<0.01 and P=0.04, respectively.

But both men and women in the HIV-positive cohort had relatively fewer fractures at nonfragility sites, compared with those in the outpatient survey, Young and colleagues found.

Risk of a fragility fracture was associated in a multivariate analysis with:

The researchers cautioned that fracture incidence in the HIV-positive cohort was based on charts, and events were not confirmed by radiological findings or central adjudication.

They also noted that they did not have data for bone mineral density among those patients or use patterns for tobacco, alcohol, or other abused substances and so were unable to assess contribution of these to fracture rates.

Source
Posted by Hepatitis C Research and News at 5:52 PM