The role of triple therapy in HCV genotype 1-experienced patients

The ability to achieve a sustained virological response (SVR) to peginterferon (PEG-IFN) and ribavirin (RBV) depends on numerous host and virological factors, as well as adherence to a prescribed treatment regimen. Patients who have failed to achieve a SVR to PEG-IFN and RBV have limited options for retreatment. Emerging data from phase II and phase III clinical trials of direct-acting antiviral agents suggest that new therapeutic regimens will be available for many patients. Treatment with protease inhibitors such as PEG-IFN, RBV, ribavirin. and boceprevir, combined with PEG-IFN and RBV, has been shown to produce high rates of virological response in both prior relapsers and, to a lesser extent, prior non-responders. The benefits of these novel treatment regimens for each individual patient must be weighed against the side effects, costs and potential of developing viral resistance. Regulatory approval of telaprevir and boceprevir is expected to begin in mid-late 2011.

Treatment-experienced patients with genotype 1 who do not achieve a sustained virological response (SVR) to peginterferon (PEG-IFN) and ribavirin (RBV) represent a continuing challenge for management. Permanent eradication of hepatitis C virus (HCV) from these patients remains the only acceptable goal of future therapeutic combinations. The ability to achieve SVR is dependent upon numerous factors including host and virological factors, a well as the efficacy of the therapeutic regimens for these difficult-to-treat patients.

A non-SVR includes patients who have relapsed or those who were non-responders to an initial course of therapy with PEG-IFN and RBV. Data from preliminary studies of triple therapy combinations including a protease inhibitor (telaprevir or boceprevir) combined with PEG-IFN and RBV in treatment-experienced patients reinforce the importance of correctly categorizing the initial response to dual combination therapy since it is an important predictor of the likelihood of response to triple combination therapy.

Non-responders are patients who fail to achieve undetectable viraemia at any point during treatment (1). Non-responders may be further categorized as null responders or partial responders. Null responders are those who achieve minimal viral suppression (usually less than one-log fold decrease in HCV RNA) during the first 4 weeks of treatment while partial responders are those with a greater decrease in HCV RNA (usually multiple log-folds) but who remain HCV RNA positive throughout treatment. In contrast, relapsers are patients who achieve undetectable viraemia during the prescribed treatment regimen with PEG-IFN and RBV, but then relapse with the reappearance of HCV RNA once treatment is discontinued (1). As we shall see below, patients who relapse with PEG-IFN and RBV have a greater chance of responding to triple therapy combinations than non-responders.

On-treatment viral kinetics are highly predictive of treatment outcome in both treatment-naïve and treatment-experienced patients, and may be considered a surrogate for the responsiveness of host IFN pathways. Rapid virological response (RVR), defined as undetectable viraemia at week 4 of treatment, is associated with an ∼90% rate of SVR and has been shown to be more predictive of treatment success than other pretreatment demographical, virological or histological factors (2, 3). Conversely, a slow virological response, with delayed or lack of clearance of HCV RNA, is a pharmacodynamic marker for suboptimal IFN/RBV-associated therapeutic response.

Recent data suggest that polymorphisms in the interleukin (IL)28B region are highly associated with a SVR as well as an early virological response to PEG-IFN and RBV (4). Approximately 80% of treatment-naïve patients with the favourable IL28B CC genotype will achieve a SVR to combination therapy. The presence of the CC genotype is also associated with a higher probability of achieving an RVR, which occurred in almost 30% of patients treated with PEG-IFN and RBV (5). The IL28B genotype has also been associated with the differential expression of IFN signalling genes in hepatic tissue (6, 7). The impact of the IL28B genotype on treatment-experienced patients has just begun to be explored but a similar relationship seems to exist for this population as well. However, since the minority of non-responders will be CC genotype, other factors will also be important.

The presence of a robust IFN signalling pathway is important for triple therapy combinations since the IFN–RBV backbone minimizes the viral resistance that is inevitable with protease inhibitor monotherapy (8). Thus, previous non-responders to PEG-IFN and RBV have a greater likelihood of virological breakthrough to triple combination therapy with a protease inhibitor than prior relapsers.

Prove-3 was a study of the protease inhibitor telaprevir in treatment-experienced patients that enrolled both non-responders (∼60%) and relapsers (∼40%) (9). A schematic of the study design is shown in Figure 1. The various treatment arms evaluated the impact of different durations of triple therapy, different total treatment durations and the importance of RBV for this difficult-to-treat population. 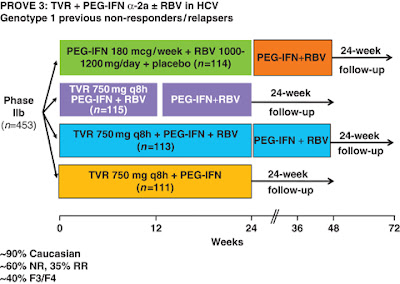 Figure 1. PROVE 3 study design in prior non-responders and relapsers. PEG-IFN, peginterferon; RBV, ribavirin; TVR, telaprevir. Adapted from McHutchison et al. (9).
Strict stopping rules were used to minimize the development of viral resistance and exposure to therapy in case of no response. Thus, in patients treated with telaprevir, HCV RNA was required to be undetectable by week 4 in order to continue treatment. The final results of the study are shown in Figure 2. 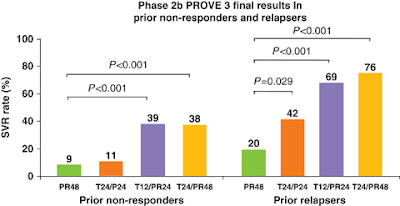 Figure 2. Final results of PROVE 3 in prior non-responders and relapsers. P, PEG-IFN; PEG-IFN, peginterferon; R, RBV; RBV, ribavirin; T, telaprevir. Adapted from McHutchison et al. (9).
Prior relapsers had the best chance of achieving SVR, with a rate of 76% in those treated with 24 weeks of triple therapy, followed by 24 weeks of dual PEG-IFN and RBV (total duration=48 weeks) (9). The SVR rate in patients treated with only 12 weeks of triple therapy and an additional 12 weeks of dual combination therapy (total duration=24 weeks) was 69%. Prior non-responders had substantially lower rates of SVR, although nearly 40% achieved SVR with similar regimens. Interestingly, when telaprevir and PEG-IFN were used without RBV, the rate of SVR was substantially diminished, emphasizing the importance of RBV in triple therapy combinations.

As discussed previously, the risk of virological breakthrough, defined as an increase of HCV RNA of more than one-log from baseline or to more than 100 IU/ml if previously undetectable, was more frequent in previous non-responders than previous relapsers. By week 24 of treatment, up to 13% of prior relapsers and 45% of prior non-responders had evidence of virological breakthrough (9).

Phase III data from the REALIZE trial of telaprevir in treatment-experienced patients have only been reported to date as a company press release (10), but we will describe it briefly to provide the most current data. Nevertheless, it must be remembered that this is a preliminary non-peer-reviewed report. The study design included triple therapy with PEG-IFN, RBV and telaprevir for 12 weeks begun simultaneously or with a prior lead-in of PEG-IFN and RBV, followed by PEG-IFN and RBV for a total of 48 weeks. In previous non-responders, the SVR rate was 86% in the combined telaprevir arms and 57% in partial responders. The SVR rate in previous null responders was only 31%, showing the differential response based on prior experience with dual combination therapy.

Full results of a comparable phase II study with boceprevir in treatment-experienced patients have not been reported. However, data from the Sprint-1 study of treatment-naïve patients suggest that the protease inhibitor boceprevir also benefited patients with a poor early response to PEG-IFN and RBV (11). The study design of Sprint-1, and subsequent phase III studies with boceprevir, used a lead-in phase of treatment for 4 weeks with PEG-IFNα-2b+RBV, followed by the addition of boceprevir. Kwo et al. (11) performed a retrospective analysis of patients based on the HCV RNA response during these first 4 weeks of dual combination therapy. Patients with less than a one-log decrease in viraemia by week 4 had only a 24% rate of SVR when treated with PEG-IFN and RBV alone, while those patients who received boceprevir at week 4 subsequently achieved an SVR of 62% (Fig. 3). 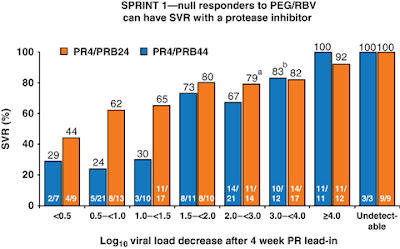 Figure 3. SPRINT 1: analysis of virological response and sustained virological response. P, PEG-IFN; R, RBV; T, telaprevir. aOne patient who was positive at week 24 became undetectable at week 30 onwards. bTwo patients were missing polymerase chain reaction (PCR) at week 24, but later had detectable PCR. Adapted from Kwo et al. (11). Presented at: AASLD; 30 October–3 November 2009, Boston, MA, USA.
It should be noted that this analysis did not include non-responders who had completed a previous full course of treatment. Nevertheless, the strong association of treatment failure with null response during the first 4 weeks of antiviral therapy suggests that these results are of interest.

RESPOND-2 is a recent phase III trial reported at the 2010 AASLD in non-responders and relapsers treated with boceprevir (12). The three-arm study compared a response-guided regimen including boceprevir to a fixed-duration 48-week triple regimen vs 48 weeks of PEG-IFN and RBV. Top-line results indicate that 75% of prior relapsers and 52% of prior non-responders treated with a fixed triple therapy boceprevir regimen achieved SVR. Relapsers and non-responders in the response-guided arm also had significant SVR rates of 69 and 40% respectively (12).

Considerations for the selection of candidates for triple therapy

Recommendations for the use of protease inhibitor triple therapy combinations are still evolving and will be dependent upon rigorous peer-reviewed analyses of phase III clinical trial data, as well as the interpretation and recommendations of various pharmaceutical regulatory agencies worldwide, such as the US Food and Drug Administration and the European Medicines Agency. Nevertheless, currently available data clearly show that triple therapies including a protease inhibitor provide exciting new therapeutic options for treatment-experienced individuals. These therapies will be most useful in prior virological relapsers, although many prior non-responders, particularly partial responders, will achieve successful viral eradication with triple therapies. The benefits of these novel treatments for each individual patient must be weighed against the side effects, cost and potential of developing viral resistance.

Dr Fried is funded, in part, by K24 DK066144, NIH Mid-Career Mentoring Award. Dr Fried serves as a consultant for and/or receives research grants from Genentech, Vertex, Merck, Tibotec, Bristol Myers Squibb, Anadys. He is a consultant and stockholder of Pharmasset.

7 Honda M, Sakai A, Yamashita T, et al. Hepatic ISG expression is associated with genetic variation in interleukin 28B and the outcome of IFN therapy for chronic hepatitis C. Gastroenterology 2010; 139: 499–509.

Source
Posted by Hepatitis C Research and News at 2:18 PM