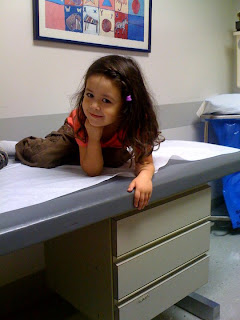 Takara was daignosed with hepatitis C geno type 1b in June of 2009. Our world as we know it stopped. With the news of Takara having Hep C came the devestating knowledge of how she contracted Hep c, through me, her mother vertical transmission. One may ask why would you have a child knowing you had Hep C? The answer simple. I had just found out I had this virus prior to finding out I was pregnant.

We were informed there was a 3% chance Takara would be infected with the virus. The doctors advised to have her tested at about 2 years of age. We tried several times to have her blood drawn and it wasn't until she was 4 years old before we had a non problematic blood draw which confirmed our worst fear. Takara had Hep C.

Takara's pediatrician reffered us to a infectious disease specialist, who told us he could not treat her. That children are not treated until they are at least 18 years of age. That there was not an approved treatment for children. This answer simply was not acceptable. I began educating myself, searching the internet, making many phone calls and leaving many messages. weeks turned into months. I prayed, searched and prayed some more. I was led to a Pediatric Liver Specialist at UCLA. Dr Susan McDiarmid, 300 miles away and she treated children.

Before Takara could start treatment she needed a liver biopsy. This was to determin the condition of her liver and aid in dosage strength of the medication. Takara started treatment on Feb. 5 2010. It has been almost a year that she has been on treatment. Takara's treatment is over seen by Dr McDiarmid at UCLA, however her medication must be administerd at home. I give her Rebetol (anti viral medication) twice daily and a weekly injection of Pegasys (chemotherapy medication). Takara must also get regular blood draws to monitor her counts. This medicine combination can make, and has made Takara very sick many times. There have been many nights I have been up with her just trying to comfort her. It is not easy to give my little princess medicine, I know will make her sick. Being on treatment for almost a year now has taken a toll on her. Takara has been battling loss of appetite, weight loss, rage, and insomnia to name just a few.

On top of all this Takara tries to carry on her daily routine. She attends all day kindergarten, which she looks forward to and enjoys greatly- most days.

I have met families from all over the world online in my search for knowledge, on how to battle and cope with these dangerous side effects. Families that have supported Takara in her fight against Hep C, some by purchasing from her website I set up for her, and others by praying and sharing valuable information.

It is for this reason, on Takara's last day of treatment in Feb., we are going to present Takara with a Mova Globe. We will show to Takara, all the locations of the families who have been, and still are supporting and praying for her.

Even though Takara's treatment will officially end this Feb. It will be a new begining for her. They call Hep C the "Dragon" and even as her fight with the dragon comes to an end, it will be another 6 months before we will know if treatment was a success for our little Dragon Slayer.