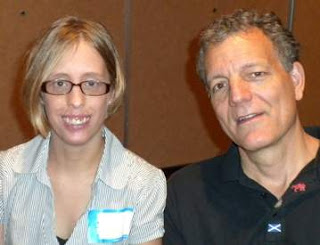 Judy Attrill knew her daughter's liver transplant had gone well because the toddler was no longer yellow.

The girl, Alisa, wasn't yet 3 years old and had been gravely ill with liver disease since infancy. A doctor had told the family when Alisa was a baby that she wouldn't live much longer.

The Attrills learned in 1985 that Dr. Byers Shaw had been recruited from Pittsburgh to the Nebraska Medical Center to create a liver-transplant program. That summer Alisa became the first child and fourth patient to receive a liver transplant at the medical center.

“We were so excited,” said her mother, of Hinton, Iowa. “It went smooth. They told us it would be 12 hours in surgery, maybe, and it was five. ... Right away her coloring was different. She was pinking up.”

A thousand transplant recipients, family members and staffers attended the reunion, which is a celebration of the program and its survivors.

Shaw said he's ill at ease at transplant reunions, but he came Saturday. He dislikes when the word “miracle” is associated with transplants. “You're trained to do these things,” Shaw said the day before the reunion.

There's another reason for his discomfort. “All of us have had plenty of failures,” said Shaw, 60. “I can't help but be reminded of those failures.”

Shaw was heavily recruited in the mid-1980s by hospitals that wanted to build liver-transplant programs. He liked the Nebraska Medical Center in part because its leaders and staff understood it would take additional training. Leaders at some institutions were arrogant, he said, and suggested they were already prepared to do liver transplants.

At the medical center, anesthesiologists willingly went to Pittsburgh for training, and Dr. Rod Markin, now interim dean of medicine at the University of Nebraska Medical Center, went to Pittsburgh and Minnesota to gain expertise in examining liver biopsies after transplants.

Shaw stopped doing liver transplants about seven years ago. He said the late-night phone calls summoning him for surgery became “a source of incredible dread” and even terror.

“You grit your teeth and just go ahead,” he said. He'd be ready for work once he got in his car, he said, but it's a relief to no longer take those calls.

To Sutton, 27, now of Sioux City, Iowa, Shaw is the man whose expertise gave her new life. “I can't believe it,” she said after her mother told the story of her battle to survive 25 years ago. “It's amazing I'm still alive.”

Sutton attended the transplant reunion with her family, including her parents, her husband, their baby boy and their two little blonde girls. One girl sat on Mom's lap, the other on Grandma's. That's a scene Grandma Attrill once wouldn't have thought possible. It is, she said, unbelievable.

Source
Posted by Hepatitis C Research and News at 2:55 PM