In Afflicted, a Doctor Finds Her Following 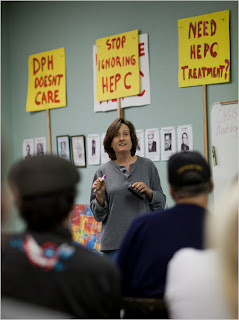 OAKLAND, Calif. — Betty Stevenson used heroin for many years and spent seven years in prison for forgery. She finally cleaned up, only to discover that she been infected with hepatitis C from contaminated needles and had serious liver disease.

Ms. Stevenson was successfully treated by Dr. Diana Sylvestre, the founder and lone physician at a clinic here set in a former factory near a blighted neighborhood known as Ghost Town.

“By the time I got here and to Dr. Sylvestre, I was dead, I had no hope,” said Ms. Stevenson, 68, who is now raising three great-grandsons. “She literally saved my life.”

Dr. Sylvestre has earned avid devotion from many of the several hundred addicts and former addicts, ex-convicts, poor and uninsured whom she has treated for hepatitis C. Getting such patients help is a challenge that, if not met, could thwart the success of new hepatitis C drugs aimed at subduing the virus.

“People will use a lot of excuses not to treat patients with hepatitis C,” Dr. Sylvestre said.

An uninsured man, who would give only his first name, Dash, showed up recently at the clinic’s weekly hepatitis meeting saying that he had tried for a year to get treatment, only to be referred from place to place and turned down by the county hospital.

A graduate of Harvard Medical School, Dr. Sylvestre was doing genetic research in New York when, in 1995, she moved west with her husband, who had taken a job at a Bay Area biotechnology company. Needing a job, she took one doing entrance examinations at a drug addiction treatment center.

She found it odd that most patients had signs of liver damage. “It finally dawned on me that all of my patients had hepatitis C,” she said.

In 1998, she started the nonprofit Oasis clinic, whose name stands for Organization to Achieve Solutions in Substance-Abuse. She began visiting methadone clinics, urging people to be tested for hepatitis C.

In one study Dr. Sylvestre enrolled 188 drug addicts to see if she could first treat their addiction then their hepatitis C. Some 65 made it through the addiction treatment and were then offered treatment for hepatitis C. Of those, 55 tried and 23 were cured.

Lorinda Willens is trying to curb her drinking so that Dr. Sylvestre will treat her hepatitis. Ms. Willens and her husband, Donald, began using heroin at music clubs in the 1970s. They quit 20 years ago, but Mr. Willens died from hepatitis in 2006 after treatment failed.

Having promised her husband that she would never use drugs again, Ms. Willens instead began drinking heavily to cope with her sorrow, which further damaged her liver.

“I want to get it done,” Ms. Willens said of hepatitis treatment. “I’m starting to get cirrhosis.”

Besides treating patients, Dr. Sylvestre is an activist fighting for more government resources. Her patients have joined her at some rallies.

“They don’t think we can organize because we are all a bunch of junkies,” said one patient, Lisa Roellig.

The patients must be restrained in pressing their case, however, because many have criminal records. “If they get arrested,” Dr. Sylvestre said, “they might not come out again.”

Source
Posted by Hepatitis C Research and News at 10:44 AM