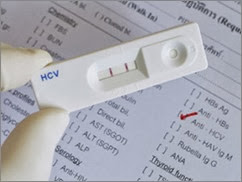 Practice guidelines are a fact of life in modern medicine. They provide clinicians with the best data and the latest consensus on what the data mean for the care of patients.

But they are -- or have been -- rather slow to react to changes.

Enter HCVguidelines.org, a website that aims to keep up with one of the fastest-moving fields in medicine today – the treatment of hepatitis C virus (HCV) with what are called direct-acting agents.

The website was developed and will be run jointly by the American Association for the Study of Liver Diseases, the Infectious Diseases Society of America, and the International Antiviral Society-USA.

A panel of 26 experts will keep clinicians on top of HCV treatment options, spokesmen for the three societies told MedPage Today before the site went live.

For those who haven't been following, HCV therapy for years was a long, difficult course of ribavirin and pegylated interferon. Neither agent actually targets the virus -- interferon is a general immune booster and ribavirin a general anti-viral.

On the other hand, direct-acting agents -- there are now four on the market and about a dozen in late clinical development -- aim at aspects of HCV replication. In general, they appear to be safer and less difficult to take than ribavirin and peginterferon, as well as being markedly more effective.

But the arrival of the new drugs over the next year or so will create a conundrum.

Between 3 million and 4 million Americans are thought to have chronic HCV and could benefit from treatment with the new drugs.

Indeed, for the first time, there is a "promise to cure nearly all" people with chronic HCV, according to David Thomas, MD, of Johns Hopkins University and a spokesman for the infectious diseases society.

The conundrum is that there are not enough specialists to go around, so that nonspecialists will have to fill in. And despite the increased safety and efficacy of the new drugs, actually using them is not going to be a matter of "take these and call me in the morning."

All the drugs are meant to be taken in combination with others, and the combinations have varying efficacy and side-effect profiles depending on such things as the genotype of the virus and the stage of liver disease. Moreover, the data seem likely to change and grow much more rapidly than we have ever seen.

For that reason, the website is "perhaps one of the only guidance documents that is a living document," according to Michael Saag, MD, of the University of Alabama Birmingham and a spokesman for the anti-viral society.

"The ability to be nimble," Saag said during a press briefing, is necessary to keep up with the expected tidal wave of information.

He told MedPage Today that the site will contain information -- not only on approved uses, but also on specific off-label drug combinations that have not been through the FDA approval process.

That's because it's not realistic to get specific approval for all possible combinations in all possible patient types, Saag said. A major advantage of the new website, he said, is that the panel can look at all the evidence and "craft [regimens that] experts in the field would be using."

Indeed, the first iteration of the site suggests a combination of two new drugs -- simeprevir (Olysio) and sofosbuvir (Sovaldi) -- that is not specifically approved by the FDA, although both drugs are on the market, according to Donald Jensen, MD, of the University of Chicago Medical Center and a spokesman for the liver society.

The first iteration of the site will also deal only with what to do once the decision to treat has been made. Other questions -- such as who to treat and when -- will be dealt with later.

Posted by Hepatitis C Research and News at 2:35 PM