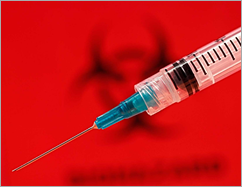 Cryoglobulinemia is one of the most associated diseases with Hepatitis C. It is a medical condition caused by abnormal proteins called cryoglobulins, which come from the simulation of lymphocytes, or white blood cells, by hepatitis C virus. Cryoglobulinemia is usually characterized by joint pain or swelling, raised purple skin rash, nerve pain and increased sensitivity to weather changes. Cryoglobulinemia can be diagnosed by a special laboratory test to detect cryoglobulins in the blood. Tissue biopsies can also help the diagnosis by uncovering inflammation of small blood vessels.

Cirrhosis is a complication of the liver, resulting in loss of liver cells and irreversible scarring of the liver. It is usually characterized by redness of the skin caused by dilated small blood vessels, shrinking of the muscles, bleeding from enlarged veins in the digestive tract, nose bleeds, weight loss and damage to the brain and nervous system. A combination of tests will help in diagnosing cirrhosis. This includes a physical exam and records of medical history.

There are two conditions of thyroid dysfunction associated with hepatitis C. One is hyperthyroidism, wherein the thyroid gland becomes overactive and secretes an excessive amount of hormones. Symptoms include nervousness, heart racing, anxiety, thinning of the skin and muscular weakness. Another condition is hypothyroidism, wherein the thyroid gland doesn't produce enough hormones, resulting in fatigue, weight gain, poor memory and concentration, hair loss and peripheral edema.

This autoimmune disorder is caused by low levels of platelets, which are cells that help the clotting of blood. The immune system produces antibodies that mistakenly destroy platelets, resulting in spontaneous formation of bruises, bleeding and menorrhagia. Autoimmune thrombocytopenic purpura, or ATP, is diagnosed by a full blood count, wherein low platelet count can be observed.

Leukocytoclastic vasculitis (LCV) is an immune system abnormality, which is characterized by inflammation of blood vessels. The actual cause of this disease is unknown, though it is associated with various infections such as hepatitis, cancers and rheumatic diseases. LCV can be diagnosed through laboratory testing of blood and body fluids. Organ function tests can also be done depending on the degree of the organ involvement.

This skin condition is a recurrent, itchy rash with unknown initial triggers. Lichen planus is characterized by shiny, reddish-purple spots on the skin, which can grow to rough, scaly plaques. Rashes can also develop in the lining of the mouth, lips and the lateral border of the tongue. This disorder is also known to affect women more frequently than men.

Those with extensive lichen planus disease appears to be more likely to have hepatitis C virus infection, though it is unclear if it is the main cause of the condition. It is also associated with different liver diseases.

Porphyria cutanea tarda, or PCT, is the most common subtype of porphyria in which the skin shows several abnormalities when exposed to sunlight. It could result in scarring and blistering of skin, as well as onycholysis. Hepatitis C, HIV and estrogens are several environmental factors that can trigger PCT.

Patients with hepatitis C have a 20 to 30 percent higher risk of developing lymphoma, based on research done by the National Cancer Institute. Lymphoma is a type of cancer that affects lymphocytes, which is a white-blood cell generated by the immune system. This disease generally affects the lymphatic system, whose main function is to help the immune system in fighting off infections and diseases by filtering out viruses, bacteria and unwanted substances. Symptoms of non-Hodgkin’s lymphoma include unexplained weight loss, fever, swollen and painless lymph nodes, abdominal pain and itching of the skin.

David Novak’s byline has appeared in newspapers and magazines around the world. He’s an avid health enthusiast, and frequently is featured in regional and national health publications. He is also a weekly writer for Healthline. To visit his other stories on Healthline, visit http://www.healthline.com/

Posted by Hepatitis C Research and News at 8:53 PM