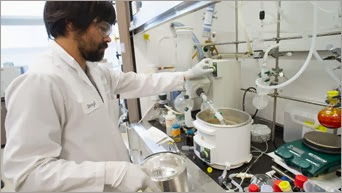 A research scientist for Gilead Sciences Inc., works on the synthesis of a potential hepatitis C virus drug candidate at the company's lab in Foster City, California, on Feb. 8, 201

As Gilead Sciences Inc. (GILD)touted its $1,000-a-pill hepatitis C cure to investors in a hotel ballroom in San Francisco, a group of about 20 protesters milled outside. “Gilead=Greed,” one sign read.

“I’m glad people have the new drugs, but I’m concerned about the prices,” said Orlando Chavez, 62, a hepatitis C and HIV counselor and one of the protesters on Jan. 13. He worries that insurers will see Gilead’s price and force patients to try a less effective, older and cheaper therapy first, he said.

Chavez has good reason to worry.

Payers face billions of dollars in new drug costs as pharmaceutical companies develop increasingly complex products in the years ahead. Express Scripts Holding Co. (ESRX), Catamaran Corp. (CCT), Aetna Inc. and CVS Caremark Corp. (CVS) among others are already pushing back against the high cost of Gilead’s drug. They’re discussing how to pit similar drugs against each other, refusing coverage for some, or subjecting treatments to more review by outside experts and refusing to pay a premium based on one drug being more convenient to take than another.

“You can’t manage exclusively by the techniques PBMs have used in the past,” Dutta said by telephone. “We’re seeing the shift, where payers are finally going to say, ’It’s $84,000, and the other therapy is $50,000 -- what am I getting?’”

For drugmakers and biotechnology companies that have zeroed in on high-priced treatments to replace blockbusters such as Lipitor, the Pfizer Inc. cholesterol drug that once drew more than $12 billion a year before losing ground to generics, the change may affect how shareholders value their stocks, according to Les Funtleyder, a health industry expert and author of the book “Health-Care Investing.”

“There’s been a feeling among investors that biotech drugs are immune from price competition,” Funtleyder said in an interview. “We’re getting to where we may have may reached a pain point.”

Prescription drugs make up an increasing share of U.S. health care spending. Spending on hepatitis C drugs alone is projected to rise seven-fold from $3 billion a year in 2011 to $21 billion in 2018, according to market research firm Decision Resources Group LLC. U.S. drug spending will grow 6.5 percent a year from 2015 to 2022, faster than overall health costs, according to the U.S. Centers for Medicare and Medicaid Services. That’s mostly driven by rising prices and a leveling off of generic drug use, according to the U.S. report.

It will take Gilead three to six months since it was approved Dec. 6 to formalize coverage with payers and PBMs, said Chief Operating Officer John Milligan in an e-mail. In the meantime, most plans are covering it, he said.

When eventually combined with a second drug Gilead is studying, the regimen’s price could rise to $100,000 or more per year, compared to what Catamaran says is about $66,000 for the current standard of care.

That’s still cheaper than treating complications of hepatitis C, which can lead to liver damage or failure and the eventual need for transplant, said Gilead’s Milligan.

“In our conversations with payers, pricing is a consideration, but efficacy, safety and treatment guidelines are equally important,” Milligan said.

Besides payers already have plenty of tools to push back on costs and force patients to try cheaper medicines first, and they use them, said the drug industry’s Washington trade group, Pharmaceutical Researchers and Manufacturers of America. “Typically by the time the patients get through the various steps they need to get to the product, they really do need it,” said Lori Reilly, PhRMA’s head of policy.

Even so, payers are thinking twice before opening their wallets. Jeff Park, Catamaran’s chief financial officer, said some prescription plans managed by his company are already pushing patients to try older therapies first, moving to the more expensive ones only and only if they fail.

“You can get to these more expensive treatments,” Park said in an interview in San Francisco during the JPMorgan Chase & Co. health-care conference. But to do so, “you have to outweigh the costs of the first, more cost-effective treatment.”

That’s a big concern for patients and advocates such as Chavez who say that strategy will force them to stick with side-effect-heavy older hepatitis C treatments that rely on difficult weekly injections, making a patient feel as if they have the flu over and over again.

Chavez contracted hepatitis C before the latest treatments were available. Now recovered, he helps others get hepatitis C as well as HIV treatment in the San Francisco Bay area. He took injections of interferon, an older drug, for almost a year to rid his body of the virus. It was a brutal regimen, he said, though it worked.

“It was terrible,” Chavez said. “I was up against it, so I had to do it, But if I had the choice today I wouldn’t.”

He and others may not have that choice.

Last year, Express Scripts stopped covering insulins and a diabetes injection made by Novo Nordisk A/S in favor of products from Eli Lilly & Co., AstraZeneca Plc and Bristol-Myers Squibb Co. (BMY) In the last four weeks, prescriptions of Lilly’s insulin Humalog are up 15 percent compared with the four weeks before Express Scripts’ change, while prescriptions of Novo’s Novolog are flat.

The same sort of competition will happen with hepatitis C, said Charles Bancroft, the chief financial officer for Bristol-Myers. The New York-based company is developing its own regimen of hepatitis C drugs that will reach the market soon after Gilead’s first-to-market treatment, and soon after AbbVie’s second-to-market multi-drug treatment.

“The Gilead product, the efficacy is at the highest level,” Bancroft said in an interview at the JPMorgan conference. “All of them are good enough, though. What will eventually happen is that pricing will become more acute. What you’ve seen in diabetes may happen more rapidly.”

Express Scripts and other pharmacy managers have said that they’re ready to block other drugs from coverage.

“We will identify which drugs can be pitted against each other and make some really tough formulary decisions,” the company’s Chief Medical Officer Steven Miller said in a December interview.

In the U.K. and Europe, health regulators regularly weigh the benefit of drugs against their cost when deciding what the countries’ national health systems will pay for. Bristol-Myers stopped selling a diabetes drug in Germany last month after the government refused to meet its price, for example.

Obamacare could have a similar effect as individuals begin to weigh the cost of insurance products, said Jami Rubin, an analyst with Goldman Sachs Group Inc. With the Affordable Care Act’s insurance expansion, millions of new customers in the law’s health care marketplaces will be picking and choosing among drug plans based on cost and coverage, instead of having their company pick a plan for them.

To contact the reporter on this story: Drew Armstrong in New York at darmstrong17@bloomberg.net

Posted by Hepatitis C Research and News at 12:59 PM