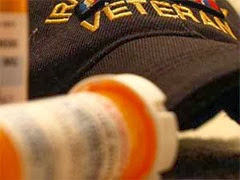 WASHINGTON -- Lawmakers on Capitol Hill hammered the Department of Veterans Affairs (VA) for the way it handles pain management in patients during a hearing Thursday on the topic.

"As I know from personal experience, the multifaceted nature of chronic pain, particularly when multiple medications are being prescribed, should not be managed by primary care physicians but rather by a qualified pain specialist who is trained to understand the complexities of treating these conditions," said Benishek, a general surgeon who has worked part time at the Oscar G. Johnson VA Medical Center in Iron Mountain, Mich., for 20 years.

Thursday's hearing drew tears from widows of veterans who died from prescription drug overdoses and others who have worked in and navigated the VA system as physicians and patients.

The number of patients treated by the VA is up 29% in the last 11 years, while narcotics prescriptions written by VA providers are up 259%, the House committee said. VA prescriptions for hydrocodone, oxycodone, methadone, and morphine have risen 270% in the last 12 years.

Additionally, as many as 60% of veterans returning from Iraq or Afghanistan report some form of pain.

"Our intent here today is to initiate better provider practices and, most importantly, better care coordination for our veterans and their loved ones," Benishek said, adding that the VA needs better pain management protocols. He called its current process a "Band-Aid approach."

"In my own personal practice, I realize I just don't know everything there is to know about pain," Benishek said. "We always, always send people with chronic pain to a specialist. To not do that and just appoint a specialist is just inconceivable to me."

Even then, the health system is short on pain specialists.

Pamela Gray, MD, an internist and rheumatologist by training, was told when she started working at the VA hospital in Hampton, Va., in 2008 that she would be the pain management specialist. Gray left her private practice to work for the VA but was later fired when she tried to speak out about her concerns over opioid prescribing.

A nurse practitioner holds the pain management specialist title for the facility in Wilmington, Del., according to Claudia Bahorik, DO, who along with Gray testified at Thursday's hearing.

With or without the specialists, patients are getting multiple pain medications. Heather McDonald, widow of VA patient Scott McDonald, reported that her late husband was seeing multiple providers who each prescribed a different medication before his overdose in 2012.

"Why is there not continuity between doctors at the VA?" McDonald told the lawmakers. "Nobody was going through his records to say 'This doctor already gave you this, so I'm not going to go do this.'"

Raul Ruiz, MD (D-Calif.), an emergency room physician and health subcommittee member, said they had a policy at the Eisenhower Medical Center in Rancho Mirage, Calif., where he used to work, to review drug interactions for every prescription. Similar care coordination efforts should be installed if they don't already exist, he said.

"I think these are approaches and policies that the VA may have," Ruiz said. "The other thing is to make sure we look at pain in a holistic manner, to look at the complexity of pain not only on the science but also the effects of the interactions with family, their ability to function, their mental health."

"These are questions that we will be asking the VA and we'll be looking thoroughly into," he added.

Gray, the physician who was fired after she spoke out about her prescribing concerns, testified that she was strong-armed into prescribing medication to treat pain rather than using nonprescriptive treatment. Robert Jesse, MD, principal deputy undersecretary for health at the Veterans Health Administration, told lawmakers it's "indefensible" for providers to only prescribe narcotics and not be allowed to use other forms of therapy.

"We are strongly committed to ensure that veterans do have what they need to manage their pain," Jesse said. "That includes, not just medications, but to truly get to the root cause of this."

Posted by Hepatitis C Research and News at 5:06 PM No comments:

Triple therapy with peginterferon/ribavirin (PR) plus an NS3 protease inhibitor has emerged as the standard-of-care for patients with chronic hepatitis C genotype-1. We provide a detailed safety analysis comparing PR to boceprevir plus PR (BOC/PR) across three phase 2/3 studies.

SPRINT-1 was an open-label phase 2 study in 595 treatment-naive patients. In the two phase 3 studies, 1500 patients (1097 treatment-naive, SPRINT-2; 403 treatment-failure, RESPOND-2) were randomized to receive PR alone, or one of two regimens where BOC was added to PR after a 4-wk PR lead-in. In this analysis, the respective BOC/PR and PR arms were combined for all three trials. The benefit of shortened duration of treatment using response-guided therapy (RGT) was also explored in the SPRINT-2 trial.

Only two adverse events, anaemia and dysgeusia, occurred 20% more often with the BOC-containing regimens compared with PR. Nausea, diarrhoea and neutropenia were the only other common events with an incidence of at least 5% greater when BOC was added to the PR backbone. The proportions of patients reporting serious adverse events (AE), life-threatening AEs, and study drug discontinuation because of an AE were similar in the PR and BOC/PR arms. In treatment-naive patients, RGT generally did not result in a lower frequency of common AEs; however, RGT led to decreased exposure to all 3 study drugs and to a decrease in the mean duration of several clinically relevant AEs such as anaemia, neutropenia, fatigue and depression, as well as earlier normalization of haemoglobin and neutrophil counts.

The safety profile of BOC combination therapy largely reflects the known profile of peginterferon and ribavirin, with incremental haematolgical effects and dysgeusia. Shorter treatment duration with RGT significantly reduced the duration of AEs.

Posted by Hepatitis C Research and News at 4:37 PM No comments: