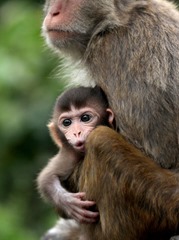 A new vaccine tested in rhesus monkeys generated a muted, long-lasting immune response to the simian version of H.I.V.

“Kafkaesque” is not a word normally used to describe immune responses, but it’s how Dr. Louis J. Picker described what his experimental vaccine did to his rhesus monkeys: “It’s like their T-cells were turned into the East German secret police, hunting down infected cells until there were none left.”

Recent work by Dr. Picker, a vaccine expert at Oregon Health & Science University, has shaken up the long, frustrating search for an AIDS vaccine. His latest study, published in Nature last week, has scientists scratching their heads, wondering if it might open up a new avenue for research.

Dr. Picker tested his vaccine in 16 monkeys who were then infected with simian immunodeficiency virus, a close relative of H.I.V., which normally would have sent them spiraling rapidly down to a miserable death. The experimental vaccine protected only nine of them, but it also did something never seen before: these monkeys slowly “cleared” the virus and now appear to be cured. “Three years later, you can’t tell them from other monkeys,” Dr. Picker said.

Dr. Anthony S. Fauci, the head of the National Institute for Allergy and Infectious Diseases, said the effect was “unique.”

And Dr. Barton F. Haynes, the director of the Human Vaccine Institute at Duke University’s medical school, said it was “potentially extremely important to understand how this happened.”

Scientists often test ideas for potential AIDS vaccines by creating similar ones against S.I.V. Never before has one eliminated an existing infection. In that sense, the effect of Dr. Picker’s vaccine was less like that of a measles or flu shot and more like that of the AIDS cures used in two famous cases, known as the Berlin patient and the Mississippi baby.

The Berlin patient, Timothy Ray Brown, was infected with H.I.V. and cured only by obliterating his immune system to defeat his leukemia, and then injecting bone marrow from a donor with a rare H.I.V.-blocking mutation. The unidentified baby was born to an infected mother in Mississippi and apparently infected with H.I.V., but then cured with early and large doses of antiretroviral drugs.

Both now appear to have no H.I.V. lurking deep in their bodies, but it is impossible to be sure because not every bit of their tissue can be tested.

Because he works with monkeys, Dr. Picker was able to do something that would be unthinkable with human patients — necropsy them, grind up every organ and take 240 samples from each to be sure that they harbored no hidden virus.

Making vaccines by simply weakening the virus that causes AIDS has failed because the virus mutates a hundred times faster than even the fast-mutating flu virus. In Dr. Picker’s vaccine, S.I.V. genes are fused to those of another virus, the cytomegalovirus. (The name means “big cell,” and it is in the herpes family but different from its relatives that cause lip and genital sores, chickenpox and shingles.)

H.I.V. fusion has been tried with adenoviruses and others, but cytomegalovirus seems to work better. It’s not entirely clear why, but one theory is that cytomegalovirus has a very long history of infecting primates — so much so that 100 percent of monkeys and about 80 percent of humans get it in their lifetimes.

Therefore, we primates have adapted to it. Although the virus can be lethal to fetuses and to those with immune systems suppressed by AIDS or transplant drugs, in most victims it causes no symptoms.

The body responds to cytomegalovirus more slowly and calmly than it does, for example, to a flu.

As in any infection, the thymus gland generates new white blood cells called T cells — in this case, CD8 hunter-killer cells — primed to target the specific virus. But in the case of Dr. Picker’s vaccine, those cells stay in an unusual “half-alert” state. A full-blown immune response eventually exhausts itself, and can even be dangerous. For example, the rare humans who catch H5N1 bird flu often die of the immune response itself; they drown in the flood of CD8s and other would-be saviors pouring into the lung tissue, spoiling for a fight.

That “half-alert” state is the “Kafkaesque” element: unactivated CD8s wander around aimlessly, while fully activated ones behave like storm troopers. But the half-activated CD8s persist in tissues, eliminating their targets quietly without triggering inflammation or even a mild fever.

When S.I.V. genes are fused to the cytomegalovirus spine, the CD8s kill S.I.V.-infected cells too.

Since it protected only some monkeys, the new technique might be best used in combination approaches. For example, Dr. Fauci said, it could be given with a vaccine that generates antibodies against H.I.V. “and maybe eliminate the cells that sneak past the antibody shield.”

Alternatively, the vaccine might be given to infected patients who are on antiretroviral drugs to see if it can “mop up” lingering reservoirs of virus.

It should take up to three years to get a human version ready for trials, Dr. Picker estimated.

“Now the outstanding question is, ‘Why only half?’ ” said Dr. Mike McCune, an AIDS researcher at the University of California, San Francisco, referring to the monkeys who were protected in Dr. Picker’s trial.

Too often, AIDS advances that work in lots of monkeys don’t work in many humans.

“Not all monkeys are the same,” Dr. McCune said. “They’re not as inbred as mice, but they’re sometimes from the same families, they get the same diets... Who knows what will happen if this goes into humans?”

Posted by Hepatitis C Research and News at 10:27 PM