Baby Shroomers and the Heroin Spike: 6 Surprising Trends in Americans’ Drug Use

A new national study found drug use among those aged 50 to 64 has roughly doubled in the last few years, as has the number of people using heroin. Here's why 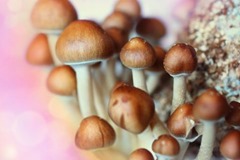 The most comprehensive study of who’s using what in the U.S. came out on Wednesday. Here are six noteworthy stats from the federal government’s annual National Survey on Drug Use and Health of 70,000 Americans.

The methamphetamine epidemic is waning. The number of meth users in 2012 fell to 440,000, down from 731,000 in 2006. The Substance Abuse and Mental Health Administration, which conducted the survey, attributed the drop to states restricting the sale of key ingredients, like pseudoephedrine, which is found in cold medicines such as Sudafed.

But heroin use is exploding. Between 2007 and 2012, the number of Americans shooting up nearly doubled, from 373,000 to 669,000. According to Mark Kleiman, professor of public policy at UCLA’s Luskin School of Public Affairs, that estimate may be low. Many heroin users are incarcerated, homeless, or not in a place where surveys can find them.

With cities and states cracking down on “pill mills”—illegal sources for Oxycontin and other prescription opiates—addicts are looking to get their fix elsewhere. “The prescription opioids are an easy path,” Kleiman says. “Then once people are strung out, they’ll do lots of stuff that they wouldn’t have done before.”

Pot is only getting more popular. Marijuana has long been the most commonly used drug in America, but its fan base is reaching new highs. In 2012, 18.9 million people used marijuana–7.3% of the population–up from 14.5 million in 2007. The number of daily users, now 7.6 million Americans, is growing as well.

Some of that rise likely resulted from growing acceptance of the drug—20 states and Washington, D.C. allow medical use, and Colorado and Washington State recently legalized recreational toking. “It’s clear that people are more willing to use legal than illegal drugs,” says Keith Humphreys, a psychologist and behavioral sciences professor at Stanford who served as a policy advisor at the White House Office of National Drug Control Policy.

But those increases are mostly attributable to Baby Boomers getting older. “This cohort, particularly those born after 1950, had much higher rates of illicit drug use as teenagers and young adults than older cohorts,” the survey explains. “This generational shift in drug use is still evident in the most recent data.”

One of your neighbors is probably a binge drinker. Last year, 52.1% of Americans, 135.5 million people, reported drinking alcohol. Nearly one quarter, about 60 million people, were binge drinkers, which the study classified as having five or more drinks in the same occasion on at least one day during the month before being surveyed.

Teens don’t think smoking is cool anymore. 70 million Americans used tobacco last year, but fewer teens are lighting up. Over the last decade, tobacco use among teenagers (12 to 17-year-olds) dropped by nearly half, from 15.2% to 8.6%.

They’re still experimenting with alcohol though. Of the 4.1 million people who reported having their first drink in 2012, more than 80 percent were under the age of 21. You can’t win them all.

Posted by Hepatitis C Research and News at 10:44 PM