HCV cure for everyone or which challenges remain?

Following the approval of the first HCV direct-acting antiviral (DAA) in 2011, an unforeseen revolution in the treatmentof chronic hepatitis C has taken place. In 2015 several all-oral DAA regimens, combining agents from different families(NS5B nucleotide inhibitors, NS5B non-nucleoside inhibitors, NS5A replication complex inhibitors and NS3/4A proteaseinhibitors) are now commercially available. In clinical trials, these regimens result in an increase in sustained virologicalresponse (SVR) rates to above 90–95% and reduce the duration of treatment to 12 weeks or less. As these new all-oraltherapies are easy to take, with some already available as simple fixed-dose combinations, and are associated with minimaladverse events, increasing numbers of HCV patients appear treatable with these modern regimens. Nevertheless, thequestions remain on how far the spectacular treatment trial results can be reproduced in clinical practice and whether morechallenging patient populations, including previous non-responders and patients with advanced cirrhosis, will continue toexist even in the era of all-oral DAA therapy.

The hepatitis C virus (HCV) was discovered in 1989 and was quickly established as the major cause of non-A, non-B hepatitis(NANB) [1,2]. HCV is an RNA virus that belongs to the family Flaviviridae . Overall, seven major genotypes and 67 subtypes have been described, with genotype 1 accounting for ~70% of infections in the US and Europe [3]. HCV genotypes have been particularly important in the past with regard to probability of achieving cure following an interferon (IFN)-based HCV therapy.Although this may become less relevant in the direct-acting antiviral (DAA) era, so far not all DAAs are active against all genotypes. The prevalence of HCV is approximately 3% around the world [4]. This virus can cause chronic hepatitis, liver cirrhosis and hepatocellular carcinoma. Therefore, HCV treatment has always been a desirable goal in order to cure HCV and thereby prevent fibrosis progression and development of cirrhosis and other liver disease-related complications. Even before the discovery of the HCV virus, the first pilot studies had evaluated the efficacy and safety of IFN-α to treat patients with NANB hepatitis, following encouraging results from IFN treatment trialsi n hepatitis B [5]. Subsequently, IFN monotherapy administered thrice weekly for 24 weeks became the first HCV therapy, albeit with low sustained virological response (SVR) rates of only6%[6]. Adding ribavirin, extending treatment duration and finally introducing pegylated interferon helped to substantially increase overall HCV cure rates to above 50% (Figure 1) [6,7]. Host factors that were associated with a good response were young age,female gender, non-African-American heritage and low fibrosis levels, and, more recently, presence of the IL-28B CC genotype[8]. More challenging patient groups were cirrhotics, previous IFN non-responders, patients with HCV recurrence after liver transplantation, and patients with HIV co-infection who, in controlled clinical trials, were much less likely to achieve SVR.Also, IFN-based therapy was strongly restricted in its widespread use because of its very significant adverse-event profile and high rate of treatment-related complications. Indeed, more than 50%of a given HCV cohort appeared to have contraindications against interferon, preventing its use accordingly. Therefore, the development of DAAs that allowed all-oral IFN-free and, at best,also ribavirin-free HCV regimens, has introduced a whole new era of HCV therapy. Not only are these new therapies much better  tolerated but they also achieve cure of HCV defined as SVR12–24 weeks after stopping HCV therapy in more than 90–95%of patients, promising widespread cure for all [9–16]. Clearly, the most obvious limitation of these new therapies is their extremely high price, which has led to a considerable delay and hindrance in the uptake of these new treatment options. Indeed, there is still no access to these new therapies in many countries or their use is reserved only for patients with advanced F3–F4 fibrosis. In clinical practice the question remains, how will patients,particularly in the presence of liver cirrhosis and priornon-response or failure to a first DAA and IFN-containing HCV regimen, respond to these new drugs outside clinical trials? This review summarises the current successes and remaining challenges of modern all-oral HCV therapy.

One of the first large cohorts of HCV patients receiving DAA-based therapy was presented at AASLD in 2014 by the TRIO network [17]. The objective of the study was to evaluate outcomes with sofosbuvir- and simeprevir-containing regimens in a real-world, heterogeneous population. Data were collected

through the Trio Platform directly from electronic prescribing records. Overall, 1211 patients from 150 academic and community sites were included in this database. The main regimens examined were: sofosbuvir (SOF)/pegylated interferon(PEG)/ribavirin (RBV), SOF/RBV and SOF/simeprevir (SMV)±RBV. Of 995 participants who could be analysed, 59% were male, 16% African-American, 30% had cirrhosis, 16% had platelet counts below 100,000/µL, 43% were treatment-experienced (35% null responders, 65% partialresponders/relapsers) and 20% had already received an HCV protease inhibitor (PI) [17]. All baseline characteristics indicatedt hat this was a more difficult-to-treat patient population than normally enrolled into clinical trials. The SVR12 rates for the different regimens (SOF/PEG/RBV and SOF/SMV ±RBV) for genotype 1 patients were 72% and 82%, respectively. Clearly,these results demonstrate that overall cure rates in clinical practice remain high and appear reproducible. However, on average there is a 5–10% lower cure rate than in clinical trials.Indeed, there are a growing number of patients for whom treatment with DAA-based therapy has failed and who will require a more potent treatment option in the near future. This is particularly true for the more challenging patient populations such as the cirrhotic genotype 1 patient with a history of previous non-response to HCV treatment. Most impressively, treatment discontinuation rates were extremely low at only 5%, with 3%owing to non-adherence and 1.9% for adverse events only,underlining the good tolerability of modern all-oral HCV therapy.Similar data were presented at the same meeting from the TARGET database, which represents an ongoing longitudinal observational study at 43 academic and 13 community centres in North America (n =51) and Europe (n =5) [18]. Overall, 2330 HCV patients consented to be enrolled into this observational study:52.2% of whom were treatment experienced, 48.4% had cirrhosis at baseline and 9.4% had already received a first HCV PI-based regimen that had failed. In addition, 19.2% of recorded patients were aged over 65 years, again highlighting that the patients within this study were much closer to real-world patient populations. Virological response rates were very encouraging. In HCV non-cirrhotic genotype 1 patients receiving SOF/SMV±RBV, SVR4 was 92% (113/123) and 87% (1566/1800) inpatients with cirrhosis. Patients with genotype 1a were only a little less likely to achieve SVR4 (89%; 47/53) than patients with HCV genotype 1b (95%; 88/93). 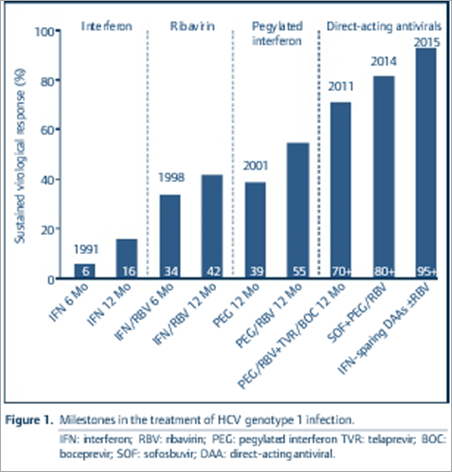 Posted by Hepatitis C Research and News at 3:25 PM